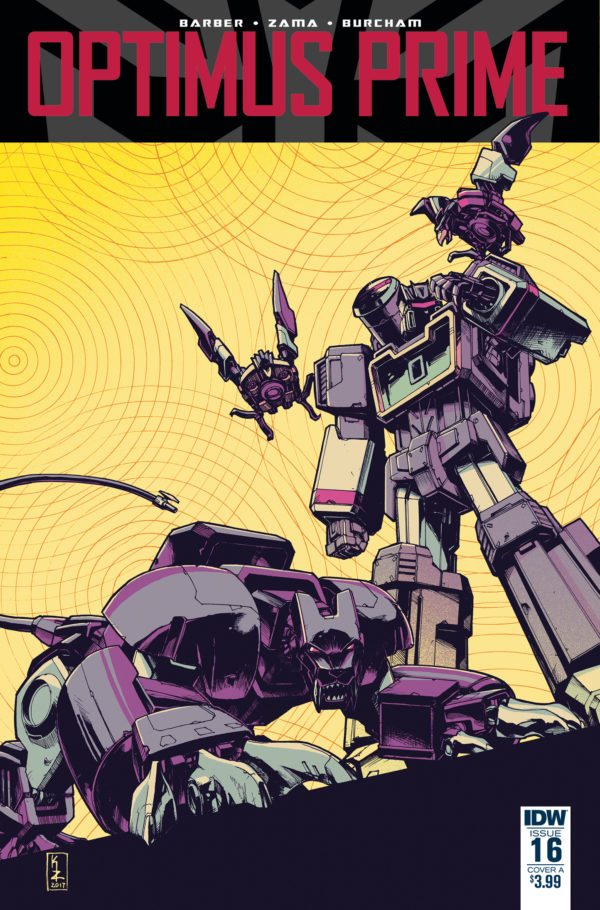 Even though Optimus Prime #16 is a relatively quiet issue, things are never quite dull on Cybertron. The feared and mythical Onyx Prime has returned to the planet in ‘The Falling Part 2’, but rather than outright attacking it the majority of the issue features a parlay between him, Optimus, Windblade and a few other characters. Onyx seems to want the best for Cybertron, but Soundwave isn’t so sure and that’s where the issue does some great work.

The issue centred around Soundwave and his past and complex relationship with Optimus Prime. We got to see a lot of him here as he thought back on all the times the Primes turned a blind eye to what was best for Cybertron and how Optimus may not be that different from the likes of Sentinel or Zeta Prime. It also reflected on Soundwave’s motives, both in the past and present, by reminding readers Soundwave intentionally, but subtly, killed some his own Deceptincons fairly recently. He’s isn’t above compromising his own ideals in order to achieve a greater good. In this way, he himself isn’t so different from Optimus or other Primes. Its some interesting character work that again highlights how much Soundwave’s character has been expanded upon under John Barber’s writing these last few years.

Another interesting factor to the story was the debate between Optimus, Onyx and the others. Some interesting points were made about Onyx’s intentions and the mistakes of Cybertron’s past, but Onyx is clearly a manipulating figure, emphasized even more by the issue’s ending. Onyx’s depiction is a nice change of pace compared to some past Transformers villains; he appears reasonable and wants the best for the Cybertronian race, even if some of his beliefs are absolute regarding the Decepticons and humans. Its nice to see that more than just barbed threats and postulations about how they will never be defeated are employed in Barber’s script to showcase the danger Onyx poses.

Kei Zama does another good job with the art throughout the issue. She succeeds in giving Onyx a terrifying physical presence, especially in close ups of his face where it looks like he’s a combination of beast and machine. One of the best images she creates is a pair of pages in the issue, one being the very first page and the other arriving near the end, that reflects who Soundwave was and is now. Its a nice callback that shows how much he’s changed, yet the situation around him seems to remain the same. However, Zama’s splash page of the climax is a bit confusing. Its not quite clear what exactly happened and I had to examine it a bit more before I had some idea of what happened. It doesn’t help that the dialogue boxes are improperly placed, letting the eye direct the wrong way on the splash page that only adds to the confusion.

Overall, Optimus Prime #16 told an interesting story that steered away from some classic tropes while delivering good characterization on Soundwave. Barber has a nice handle on all the characters and he’s already making Onyx out to be a different antagonist than we’ve seen recently. Zama’s art is good, particularly her character designs, but the confusing climax somewhat lessened its impact. Still, ‘The Falling Part 2’ was a nice follow up chapter to this new Transformers arc.