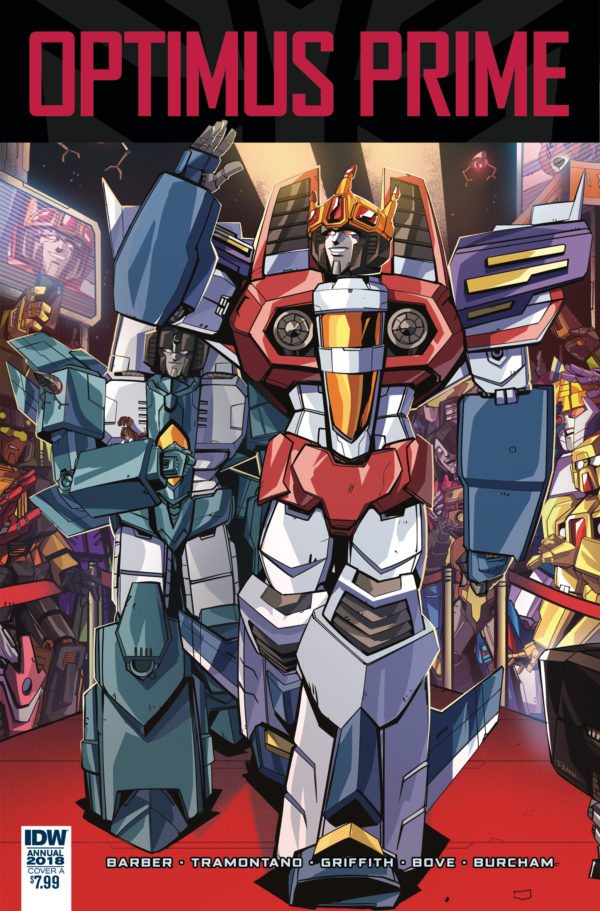 Its funny that considering this issue is the special annual for IDW’s Optimus Prime series, the title hero is only featured in one or two quick panels at the very beginning. The rest of the issue is devoted to Starscream and Thundercracker, taking place in between the final issues of Tranformers: Till All Are One and slightly before the current Optimus Prime issues in a humourous story about Starscream enlisting Thundercracker to help his PR image by making a positive movie about him that is very revisionist. Despite this idea, which actually had a fair amount of potential, the Optimus Prime Annual didn’t fulfill its premise.

Instead of centering on Starscream, the issue focuses on Thundercracker and his screenwriting and filmmaking attempts. This created much of the humour in the issue as Thundercracker used a whole lot of cheesy and crappy dialogue as well as employing tired and true tropes. John Barber even made fun of the fact fights in comic books and movies feature many quips or puns with Thundercracker remarking its harder to throw those around in real life than the movies.

There’s also a couple humourous digs at Michael Bay’s Transformers movies with how audiences prefer big explosions with Cybertronian films, not a historical or philosophical drama despite the latest action packed Cybertron film bombing at the box office, much like Transformers: The Last Knight. Its also funny how timely this issue is considering Hasbro’s plans to reboot the Transformers film franchise and my own piece hoping they make the future films a bit more deeper and character driven like some of the other Transformers media.

However, this issue doesn’t wholly succeed even with the humour and meta-commentary. The characterization of Thundercracker is a little off; he’s known and had been under Starscream’s command for millions of years, yet he falls pretty easily for Starscream’s revisionist history. Barber at least uses a couple scenes where Thundercracker questions Starscream’s version of events, painting himself as a heroic yet reluctant member of the Decepticons, yet it still creates some inconsistencies. One major example is how Thundercracker portrays Starscream’s role in All Hail Megatron despite the fact Thundercracker was there and vocally opposed Megatron and Starscream’s decisions during the event.

One other area this issue falters with is the examination of Starscream himself. The past few years in IDW’s Transformers comics and have shown Starscream as a very layered and nuanced antagonist, especially in the last year with the Till All Are One series. However, this issue doesn’t really go any further into examining new facts about the Decepticon seeker, retreading some old ground. One of the interesting points seen is Thundercracker’s use of Starscream’s constant desire to impress Megatron, but even that has been touched on better in past issues.

The art from Priscilla Tramontano and Andrew Griffith is fairly good throughout the issue and remains consistent with their differing styles. The colours from John-Paul Bove and Josh Burcham are also vibrant and offers some nice variety between how the flashbacks, the present and ‘cinematic’ moments are depicted. The only downside is how the humans are shown as they’re not really detailed in their looks, giving some silly expressions or inconsistent physical features.

Optimus Prime Annual 2018 was just an okay comic. Though it succeeded with its humour, the characterization of Thundercracker seemed a bit inconsistent and there wasn’t anything really new revealed about Starscream. The art helps, but even that isn’t enough to lift up the story.