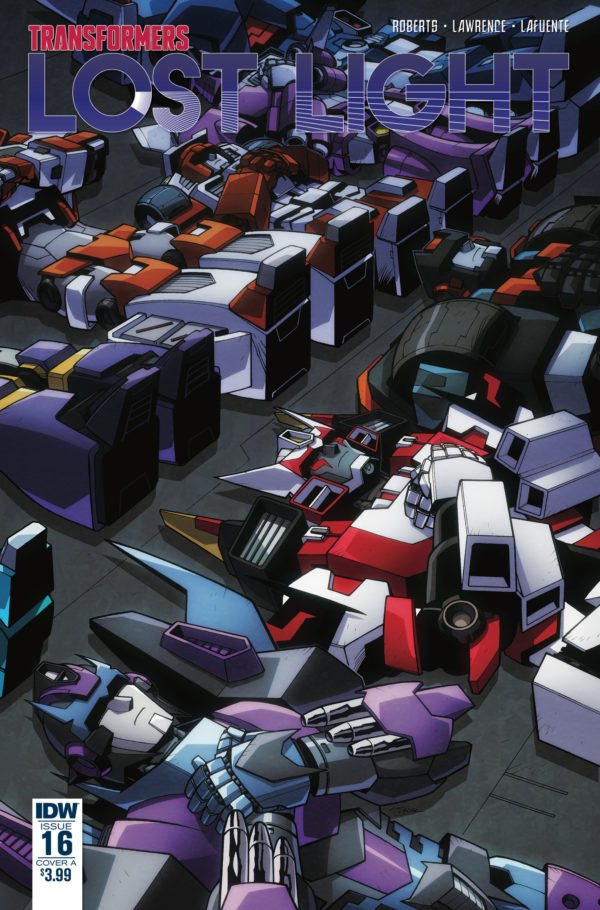 Transformers: Lost Light returns to Rodimus and his displaced crew after a few issues in an intriguing story where they wake up to find they are in the afterlife. Or at least, what appears to be the afterlife. This issue had everyone confronting their doubts, faith and past mistakes as they comes to terms with their possible deaths. James Roberts weaves in a lot of the mythology from the Transformers comics and puts an interesting spin on what the bots might go through when they die.

Rather than feature any action or some great, looming threat, Transformers: Lost Light #16 was a quiet issue that relied much more on the drama and characters. Roberts went fairly in-depth into each of the bots’ varying beliefs of the afterlife and their doubt in their surroundings. Ratchet’s views in particular were nice to see. He’s always been something of an atheist so it was interesting to see his views challenged so directly – especially when it was noted they were in this situation because the crew tried to save Ratchet’s life.

Rodimus’ reaction to this development, however, was very interesting. Instead of taking it in stride and trying to find a solution with his usual bravado, Rodimus pretty much shut down emotionally. He wasn’t really listening to anything and seemed resigned, albeit angrily, to the fact that he was now dead. It took Whirl of all people to snap Rodimus out of his funk by stroking his ego and asking ‘what would Megatron do?’ in this situation. It offered a nice bit of character retrospection for the Autobot leader, subtly examining the pros and cons of his rash nature.

Roberts also used a lot of subtlety throughout the story to suggest things were not quite what they seemed. Anyone who has read Roberts’ Transformers series knows he plays the long game and never includes anything in his stories without some kind of purpose. This makes reading his issues fun to comb over each word or panel for some kind of clue or red herring and there’s a few here that hints there’s more going on than just coming to the afterlife or waiting at its gate. Clues such as how a dead bot knows Nautica’s nickname when there’s no possible way he could know that is here, yet isn’t called out by any of the characters. Now this could just be a continuity error, but as I said most of the time Roberts writes with a clear purpose in mind, making the Afterspark even more mysterious.

Jack Lawrence’s art is good throughout the issue. He uses some nice transitions of the characters transforming and his facial expressions cover a wide array of emotions. There is even a nice joke at the types of bots who wear faceplates and how difficult it is to tell what their expression is. Without any action, Lawrence uses his time to really focus on the bots’ body language, displaying their emotional states through that and their expressions. It works to a great degree which is an impressive feat for a cast of robots and several who have their faces covered.

Transformers: Lost Light #16 was a very successful issue that focused on the characters and their emotions, yet subtly raised the mystery of the Afterspark and what new danger they were in. Roberts’ script was solid and Lawrence’s art was some of the best he’s ever done in the series. This is definitely one of their best issues yet.