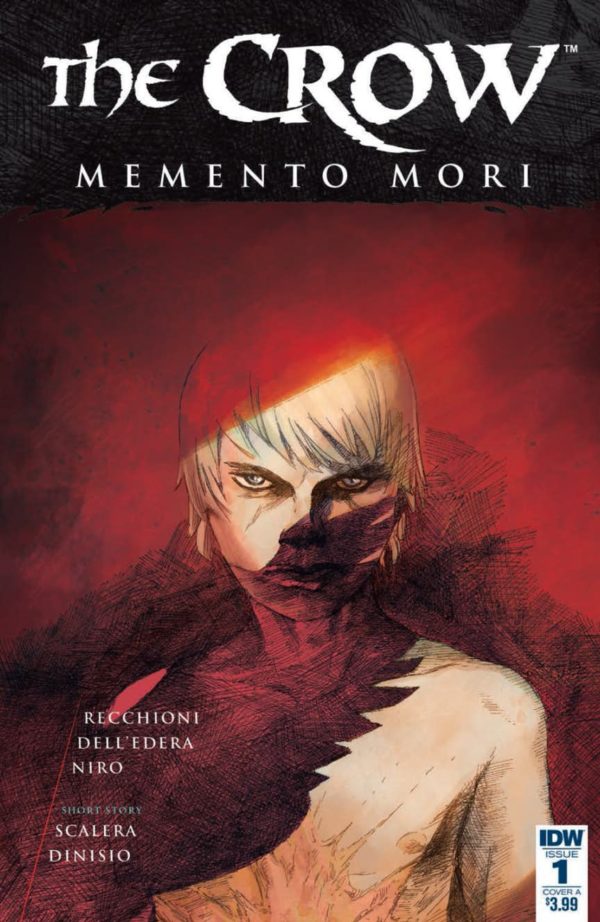 The Crow: Memento Mori delivers a brand new story in the universe of The Crow franchise. The Crow has a basic concept if you do not already know: a person who has been wrongfully killed is brought back to life and linked to a Crow to help them right the wrong of their death. The person is granted supernatural abilities and invulnerability as long as their crow remains unharmed.

The focus of this series is David Amadio; David and his girlfriend were visiting a holy procession when a terror attack killed many people. The sixteen-year-old David and girlfriend were among the victims, and this allows David to be brought back to carry out the judgement needed to right his wrongful death.

David’s character was very religious up until his death, and his resurrection seems to have freed him from his religious servitude. The issue opens with numerous, lengthy biblical quotations – there is even a passage about “though shalt not kill” only being the sixth commandment, leading to an interesting thought about it not even being one of God’s priorities.

The issue does not deliver much in the way of story for David, and a prior understanding about the series in general does help explain the events. Near the end of David’s part of the issue, he confronts the group who were behind the attack and delivers swift judgement while preaching their wrongdoing and how they do not carry out god’s work.

After David’s part of the issue ends, there is a mini story titled “Buried Virtue”, based around a female protagonist who has also returned from the dead. This is set in a earlier time period, or possibly a fantasy setting where monsters such as giants and other monstrosities have been mentioned.

The female chats casually with her crow about the next great challenge in her extended life, where her brutal lifestyle of fighting and killing will deliver her greatest challenge. It’s rather confusing, but hopefully will be explained in subsequent issues.

Overall Memento Mori delivers a lovely stylised telling of a new Crow story. The David tale was very basic in terms of story and took a few pages of religious literature to get into, though it was an opening issue and so it has many places to go from here.