Rafael Motamayor chats with Philip Gelatt on Lovecraftian horror, going from screenwriting to directing and more… 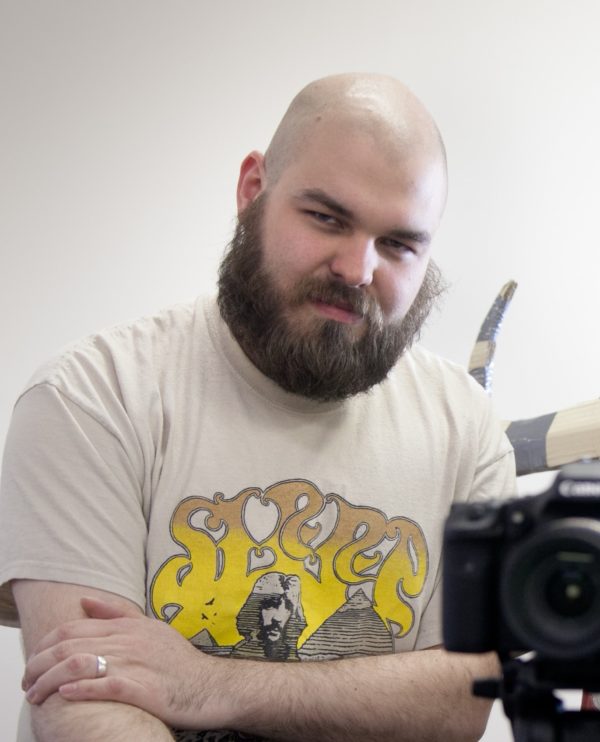 When did you first think of adapting Laird Barron’s work?

I was in a place where I knew I wanted to write and direct something. I was already a fan of Barron’s work and I was sort of looking for something that interested me and that I could adapt. When I first read the story I was sort of aggravated by it, because it is so ambiguous and opaque and strange. But then I found myself kind of obsessed with it and trying to find out what was going on in the story, looking at details and characters and decided this would be a good challenge to adapt this to the screen.

What made you decide to direct it in addition to write the script?

I am mostly a writer in my day to day life, but I also enjoy directing even though I can of hate it, but it’s like a thing that I feel like I need to do. So I knew I wanted to direct something, and learn about as many aspects of the filmmaking process as I could. I am a bit weird as a screenwriter as I am not super protective of my script. The thing you learn from writing to directing is why directors mess your script up, as we learn that sometimes what you think works on the page doesn’t work the day you’re shooting, and you need to be able to change things on the fly. But I like that I was the one making the decisions in what to change.

Your last 3 projects have been very different. Europa Report had a bigger budget, Rise of the Tomb Raider is a video game, and now They Remain. How was the writing process for them?

The more I work the more I find each project requires a different mindset. On Europa Report I was just a screenwriter, but I didn’t originate the story, and I didn’t start from the beginning. I was fortunate that I got to oversee the story as I was the only writer, but a bigger budget movie like that is different because you have to handle the politics and all the different visions. As for the writing itself, it involved a lot more research into space travels and physics that affected the writing. For Rise of the Tomb Raider I wasn’t involved from the beginning, but was brought up later on to help. You don’t late a lot of freedom, but basically the narrative designer tells you “these four scenes, we don’t like them, make them better”. So you don’t get a lot of freedom to come up with scenes or moments, it’s more working with very tight constrains. For They Remain the main advantage of working with a lower budget and being a director and also a producer, I got as much freedom as you get, which is both scary but freeing. You know that old cliché of “there’s nothing scarier than a blank page” but when you are adapting you sort of skip that stage, since you already have architecture there that you can rely on. If I can only adapt stories for the rest of my career I would be happy, I really enjoyed it.

Lots of film are described as Lovecraftian without really deserving the comparison, how is They Remain different?

The first thing I thought of is that it should be Lovecraftian in tone, but not necessarily in visuals. We do have a horn and a skull but there’s not like a giant Cthulhu, so in that sense I wanted to drill down in the subtext of Lovecraft, the cosmicism and the way he and other writers write human characters that are at the whim of forces they can’t understand. To me that’s more interesting than ancient monsters and books, humanity’s place and realizing we are not at the centre of the universe and there are forces greater than us.

Camera was often static and unmovable, can you talk about that and the wide shots? Characters feel small compared to the area surrounding them.

That was a decision related to the Lovecraftian theme. We chose frame that emphasizes the environment over the human characters, by putting our characters in perspective of a larger visual. Having a character prominently in the foreground and another in the background out of focus to emphasize the uncertainty that exists between them, they don’t see eye to eye and they don’t trust or know each other. As for the static shots, I just like the stillness, it’s become unsettling for moviegoers because you don’t see it in horror films, so it throws you off your game.

Can you talk a bit about how you managed to sustain the film despite there being only two characters?

It is really hard, I’m still unsure even after finishing the film. A lot of it was done in the edit room, as the script had lots of long scenes of pure dialogue and it took us a long time to settle on a final cut, because we had to modulate those conversations and make each scene different than the others.

Did you ever think of having the answers clearer for the audience? Because the movie is very ambiguous.

There was a brief moment before we even decided to make the movie where I considered laying all my cards on the table. Basically there’s a version of the movie where the cult is still there and the cult attacks them and takes one of them into a cave and has to be saved by the other. SO for a brief moment I thought I could turn the story into like The Hills Have Eyes but I very quickly thought it was a bad idea to turn this story into something it’s not. For me it sounded more interesting to try and do it the hard way.

This movie doesn’t feel like conventional horror. Do you think of the film as horror?

I will always call it a horror movie, but with an asterisk. For a large portion of the horror audience this will not feel like a horror film because it doesn’t do many things you expect. So if someone in the audience screams that this isn’t a horror film, then I understand.

Any other projects you are working on?

have a few things I’m working on that I can’t about. But I can say I have been working for a few years, though my active involvement has ended, on a movie called The Spine of Night, which is a rotoscope animated surreal fantasy film that’s like Fire and Ice or like Heavy Metal and we are supposed to be done with the animation by the end of this year, so hopefully it will get released next year. I am very excited about it because it is just like an amazingly gory cartoon that is all I’ve ever wanted from a fantasy film, and if you like Ralph Bakshi or Conan the Barbarian it will be up your alley.

Philip Gelatt, thank you very much!