It’s time to reposition some relationships with ‘AKA Pork Chop’, as Jessica orders the priorities of those circling her maelstrom of life; Trish, Jeri, Alisa, Oscar and Malcolm all take their turn being realigned.

We’re into the home stretch now, with the individual threads hinting at their resolutions. Most intriguing of all appears to be the darker path that Trish is walking. Drive evolved into addiction, but now it appears her motivation could be jealousy, which could force her into a confrontation with Jessica, and a twist nobody could see coming, but let’s not get ahead of ourselves. 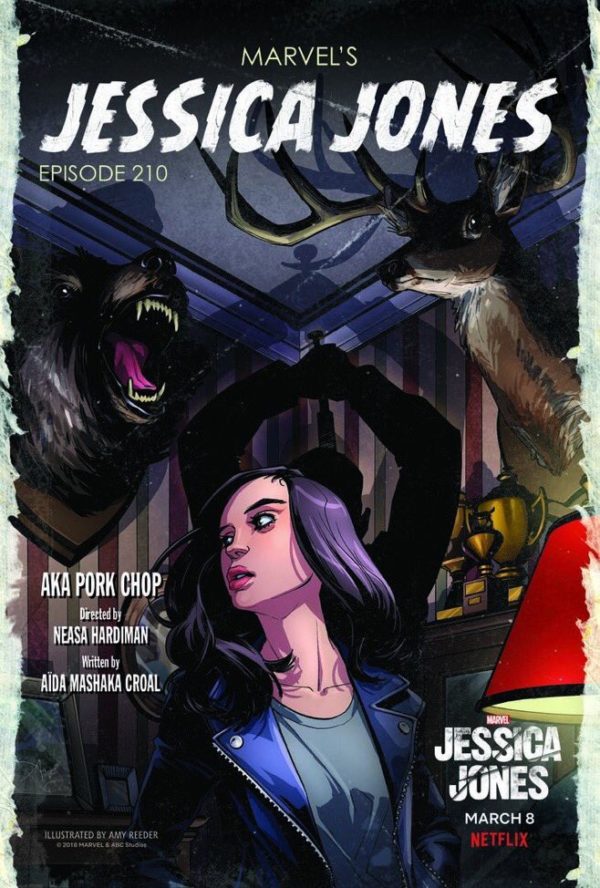 The episode begins with Jessica and Jeri negotiating a deal for an incarcerated Alisa, and then in a wonderfully stylish transition shot, cuts to Trish’s inevitable car crash of a TV audition. It’s here that she overhears news that they’ve arrested the killer, prompting Jessica to inform her and Malcolm of the murderers true identity – ‘The moral of my shitty story is that if your dead parent comes back to life, stick em back in the ground”

Trish’s muddied morality remains intact enough for her to decide that she doesn’t want the story to blowback on her sister, so resolves to pursue Dr. Malus instead, although her intentions for wanting to do this aren’t clear, especially when she bops Malcolm on the head when he’s done all the leg work in tracking down the absconding doc, who unless I’m mistaken, is seen for the first time without a retro band t-shirt on.

Doing great work in this episode is Carrie-Ann Moss, with her aloof routine replaced by warm smiles, albeit temporarily, as the truth about Inez’s betrayal causes a moment of crushing humanisation for her character. It’s wonderfully shot, with this episode having a distinct visual flair to it, and brilliantly acted. You get the feeling that the overriding arc of these final few episodes will be slowly punishing any happiness this glum little collective have attained. 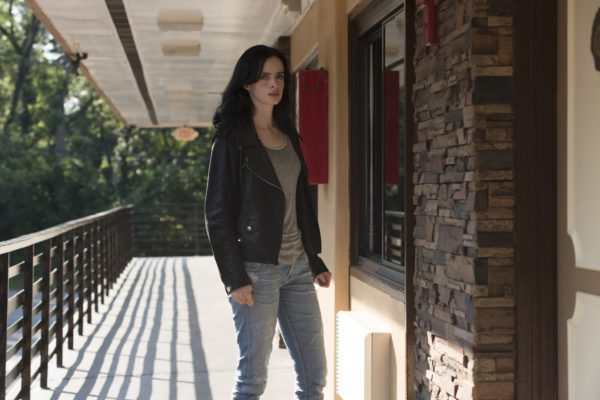 Said punishment begins quite quickly for Jessica, who while trying her hardest to get Dr. Malus out or the country for her mother, is sidelined by a prison warden come abusive NRA poster boy, who catches Jessica snooping around his place, and receives a fatal baton around the head while trying to stop her. Oh what a tangled web you weave Miss Jones.

‘AKA Pork Chop’ is a brisk sojourn when compared to the pace set by Jessica Jones thus far, perhaps even a little rushed considering all that’s crammed into it, but the huge moral dilemma at the heart of the cliffhanger – the first non-Kilgrave influenced life Jessica has taken – should add further dramatic weight to the final three hours.