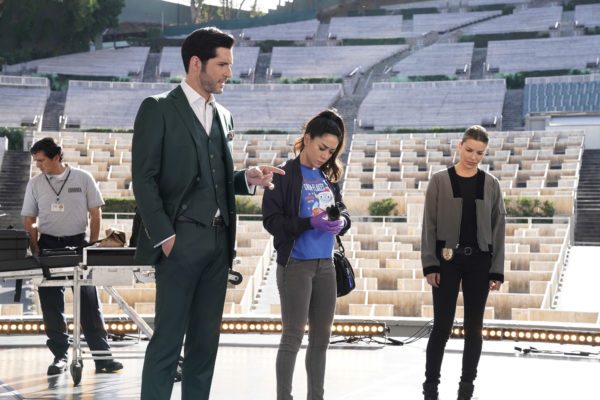 While Lucifer could never be called a particularly original show, it does at least embrace the clichés it peddles, selling them wholeheartedly. Set-ups may be quite predictable, and follow storylines we expect, but with its playful tone and knowing glances it almost doesn’t matter.

‘Let Pinhead Sing!’ has the age-old scenario of the attempted murder of a wildly popular celebrity: Singer Axara (Skye Townsend) is targeted by a firework at her Hollywood Bowl concert where, due to a last-minute swap in with a backing singer, the diva narrowly dodges her fate. As a star, there are plenty of suspects on the table – from obsessed fans to the staff who have to deal with her every day – and despite the danger of further assassination attempts, Axara is insistent that she will carry on with her tour. As our first encounter with the singer has her “smudging my space” after the violence and necking a very important turmeric smoothie, we know that she’ll be a handful. 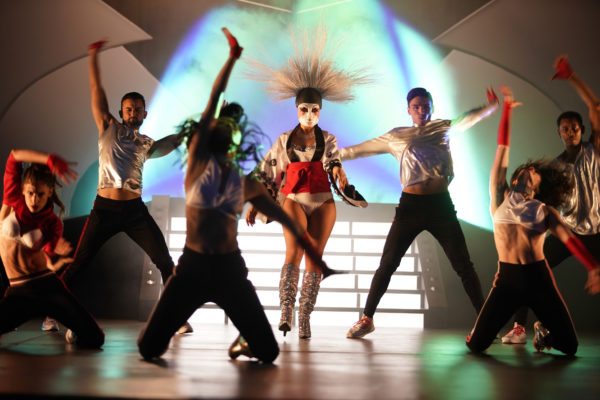 Lucifer (Tom Ellis), meanwhile, is trying very hard to distance himself from Chloe (Lauren German) after last episode’s bomb scare, worried that his Father’s chosen “eye for a eye” could be her. His answer is to busy himself making best friends everywhere he goes, in a desperate bid to distract, so he makes friends with Rob (“Bob!”) the bodyguard, hails a temp at LAPD employee of the month, gives Ella (Aimee Garcia) a ‘World’s Best Forensic Scientist’ t-shirt (actually quite cute – and the two of them make a great double act that warrants further screen time) and basically tries to ingratiate himself with anyone who looks his way. Chloe recognises his change in behaviour, although slightly misinterpreting his reasons, and is a tad put out.

Charlotte (Tricia Helfer) is also busy – busy trying to be less self-centred, which finds her offering to mediate for Linda (Rachael Harris) and Maze (Lesley-Ann Brandt), who is definitely not feeling compliant (despite Linda’s genuine apology, sacrifice of her relationship with Amenadiel (D.B. Woodside) *and* an impressively gift-wrapped double headed axe). Charlotte describes this chance to help others as making her feel light and like she’s floating, “although maybe that’s the three gimlets I had at lunch…”. Helfer is slowly and deftly transforming Charlotte from foe (i.e. previous human vessel to Lucifer’s mum) into highly-likeable friend. 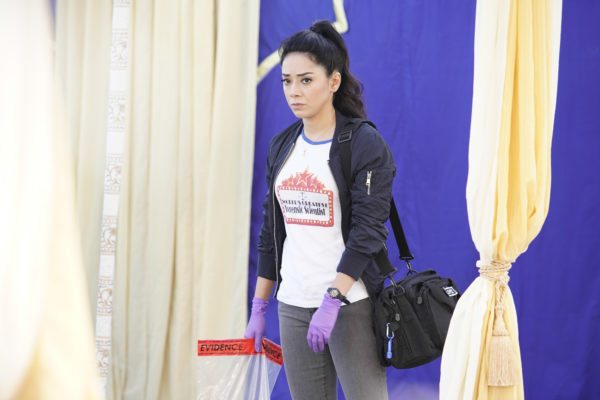 As Pierce (Tom Welling) licks his wounds after failing to erase his mark last week, we’re treated to his painful crooning, both uncomfortable to watch and akin in sound to a small dog dying. Dan (Kevin Alejandro) tries his best to gee him up at the bar (“Lay it on me, bro”), but finds even his robust positivity challenged by Pierce’s views on the “wasteland” and “tsunami of crap” that is life…

With Lucifer sensing another distraction in Axara, he offers to personally protect the songstress, learning both how demanding she can be and also how much she is motivated by her love for music. This leads to a most excellent duet of ‘I Will Survive’ with the devil himself, which Lucifer is just about tongue-in-cheek enough to get away with – and stitches surprisingly neatly into the plot! The episode comes to quite an uplifting end this week, with Pierce inspired out of the dumps, and burying the hatchet with Amenadiel, after watching Lucifer take a knife to the chest for Chloe when Axara’s would-be assassin is revealed to be her possessive assistant. The two take it as a sign of hope for everyone if the Devil himself can feel that way about someone. This denouement finally hints again too at a suggestion of developments in Lucifer and Chloe’s relationship – will it be further defined?