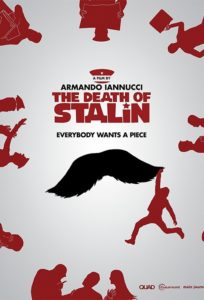 Follows the Soviet dictator’s last days and depicts the chaos of the regime after his death. 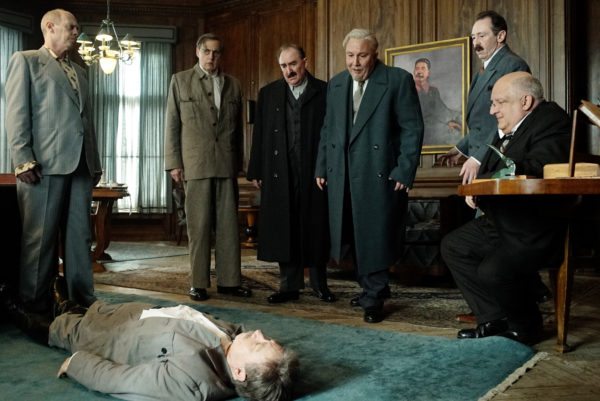 The greatest attribute of The Death of Stalin is that one doesn’t need to be a history buff or overly enthused about Soviet Russia power swings to break a funnybone laughing at the backstabbing buffoons all taking up different allegiances and plotting against one another in the aftermath of Josef Stalin’s tragic (more like comforting to the rest of the world) demise. Made up of American and British actors portraying Russians, sometimes with an accent and other times not, writer and director Armando Iannucci (most famous for creating the commercially celebrated and award-winning political satire television series Veep) is only concerned with stuffing every inch of every frame with eccentric personalities that, although turn their real-life counterparts into something of a joke, heighten the absurdity of actual events.

It’s a close call, but the best in show is definitely Steve Buscemi’s Nikita Khrushchev, who is consistently fed one-liners and insults that are fired off in the actor’s typical loudmouth and confrontational manner; he gets some real doozies here whether it be from hustling over in the morning with clothes draped over his pajamas to the unconscious state of Stalin, or slowly being nudged to a mental breakdown as he is placed in charge of funeral arrangements. Opposite him is easily manipulated doofus Georgy Malenkov as played by Jeffrey Tambor emerging with power due to encouragement from the overweight, bald, and slimy Lavrenti Beria (Simon Russell Beale), a boisterous war general played by Jason Isaacs, and various other oddball identities that feel as if they could occupy their own satirical comedy for 90 minutes. 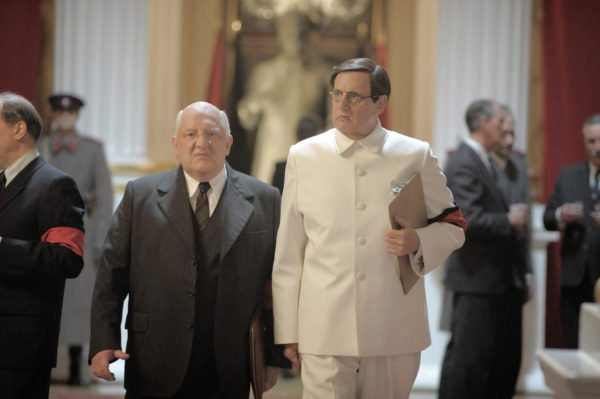 Cramming so many characters into a 105-minute running time is always a tricky recipe to get right, but thanks to the stageplay reminiscent adaptation of the graphic novel from Fabien Nury and Thierry Robin, and multiple scriptwriters on-board including Iannucci himself (presumably, scribers were assigned certain characters to maximize resources), The Death of Stalin functions as finely tuned chaos aware of how to distribute comedy gold evenly between these clowns. In the moment, they decide to drag Stalin’s knocked out body over to his bed with each of them grabbing a body part, and aside from being a hilarious sequence, it represents the forthcoming games to replace and become him. Additionally, there are multiple other scenes elaborately constructed to utilize as many characters as possible, which unsurprisingly results in laughs coming from every direction.

Irony is not lost on the film or its characters, as the group of officers quickly realize that there are no American doctors left to assess what is wrong with Stalin and see if they can bring him back to a stable condition considering that they have all been sent to the Gulag. Naturally, this causes mass hysteria as the bumbling idiots freak out to locate any useful form of medical assistance. That’s just the beginning, as it’s not long before prisoners of all kinds are being released to earn favor in the power shift as it swiftly spirals out of control into maddening conflict ending in bloody violence. With that said, dark humor is strong with The Death of Stalin, notably when bodies start piling up on screen (and saved at pitch black timing). It certainly becomes ickier as it goes on but never loses that deft touch of toxic humor. 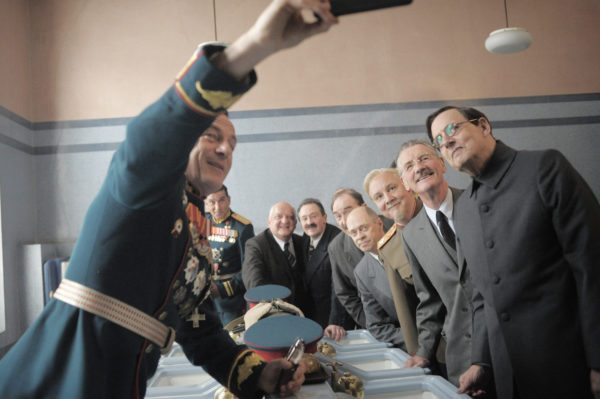 Things get so satirically black that Russia has actually banned the film from being shown in theaters, but honestly, censorship that preposterous is just more of a reason that folks of any nationality should go out of their way to check out what the fuss is about. Filmed with a blaring orchestral soundtrack and old-fashioned presentation, it’s understandable why Mother Russia would deem the film as propaganda they want to be exterminated (especially when also factoring in the madcap material), but that kind of reaction proves once and for all that Armando Iannucci’s satire is blisteringly on point and delightfully scathing. I realize we are a few months into 2018 now, but The Death of Stalin is one of the most socially relevant, sharply written and funniest exercises of 2017 punctuated by a terrific ensemble cast. How this was not a serious awards contender is as baffling as to how totalitarians like Stalin got control in the first place.