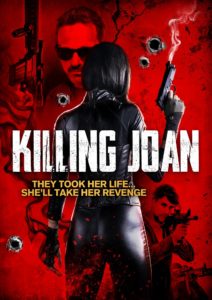 Mob enforcer Joan Butler (Jamie Bernadette) finds herself betrayed by her erstwhile employer. After being attacked she returns from the dead with otherworldly powers and sets out for revenge against those who wronged her. 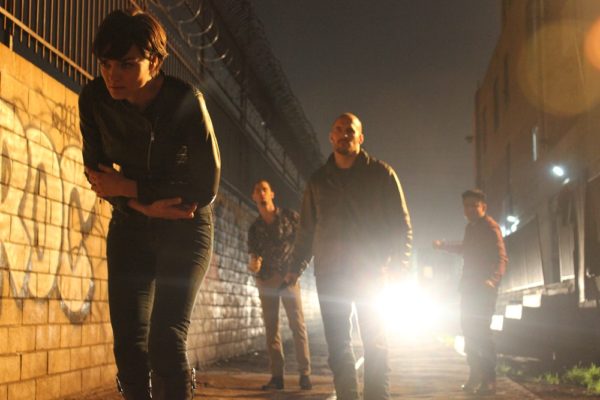 Killing Joan is best compared to The Crow, the gothic urban fantasy starring Brandon Lee. Both films see their anti-heroes return from the dead for vengeance wielding dark, vague supernatural powers against their murderers. Sign me up! Unfortunately, Killing Joan plays more like the straight to DVD sequels that the original Crow spawned. The film shows glimmers of a cult hit but succumbs to fumbling acting, clunky storytelling, clammy dialogue and stagey action.

To be fair and clear, credit is due to any filmmaker who sets out to make a feature using their ingenuity instead of dollars. At times Killing Joan does shine with a certain DIY charm, but this charm is undermined by how seriously the film takes itself and how difficult it is to take as such.

Writer/director Todd Bartoo makes the bold choice to paint his titular character as severely unsympathetic. Joan’s introduction comes when she interrupts a couple in the throws of sex; she holds a butterfly knife to the man’s neck and tells him he’d better pay his debts. Later, she shoots one of her own goons and hits a club where strippers gyrate through shafts of tinted light and sparse extras mill around. When a man turns her down she promptly goes for a woman, kissing her and, ultimately, taking her home. While these scenes are punctuated by posturing and recycled dialogue they do set the table for an entertaining exploitation film. 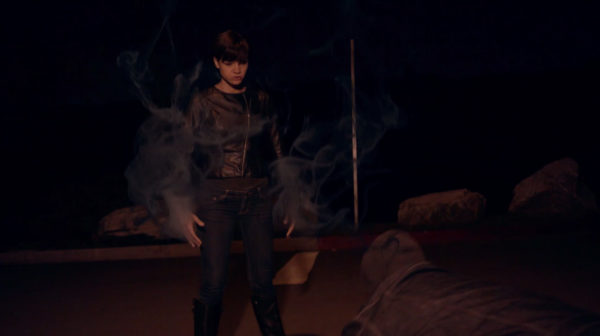 It doesn’t take long for the crew of gangsters Joan leads to turn on her. In a brutal, but surprisingly bloodless, scene Joan is beaten and then shot, apparently, to death. However, as she fades, dark, incorporeal tendrils slither out of the shadows and pull her in.

The shadows then spit her out in the room of her ex-boyfriend (and future love interest) who works as a counselor for at-risk youths. Joan seems fully mended at this point; not only that, but she’s gained a connection to the shadows, able to mold them and even shoot them at people – apparently, these shadows are a good deal more tactile than the ones I’m familiar with.

Still, the idea of controlling and traveling through shadows is a neat one that echoes Roger Zelazny’s cult classic novel Jack of Shadows that effectively melds science fiction and fantasy. But, these new powers are not without their downsides: Joan is limited to the dark and vanishes whenever the lights get flipped on.

As with any film that predicates itself on darkness (Pitch Black, Lights Out and Vanishing on 7th Street to name a few) Killing Joan finds it impossible to stick to its rules. At times Joan vanishes in a puff of black smoke when the lights go on, but more often she walks through well-lit bars, bedrooms and back alleys. The rules of her powers remain unclear. Towards the film’s latter half it seems as if everyone from the secretary to Joan’s ex-boss are whipping out previously undisclosed shadow powers. The film concludes with a final act of dues ex machina that robs Joan of her revenge and dilutes her struggle up to that point. 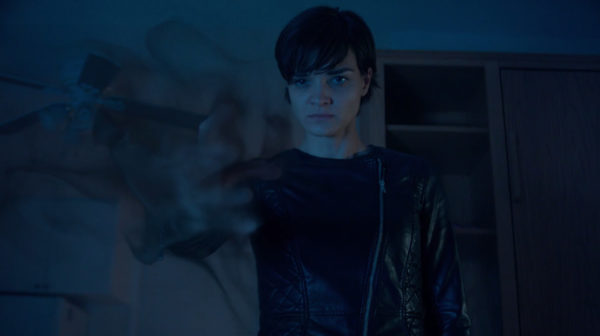 All that being said, the fantastical elements represent the film’s high water mark. The crime story is populated with exchanges framed in awkward medium-wide shots that seem as if they would benefit from a few more takes and camera set-ups. In the pauses the actors seem to be grasping for the next line, not selling the moment. As the main antagonist, Foster feels closer to middle management than mob boss. Playing Joan, Bernadette channels a low-level rage, which works better than the stock romantic patches with her social worker boyfriend.

The score by Michael Kobayashi toggles between drab hip-hop loops at its worst and angry, grinding guitar riffs at its best. In Joan’s death and rebirth scene, which stands as the film’s most dynamic and effective action bit, we get a glimpse of the movie that could have been: a propulsive, over-the-top, grimy revenge movie with a rock-infused score to back it up.

For those who can tune out, or otherwise bypass, the roughness of the film overall there are snippets of fun to be had. Others might enjoy the film more in the context of a Mystery Science Theater 3000 commentary.