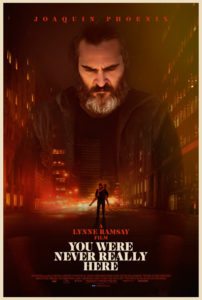 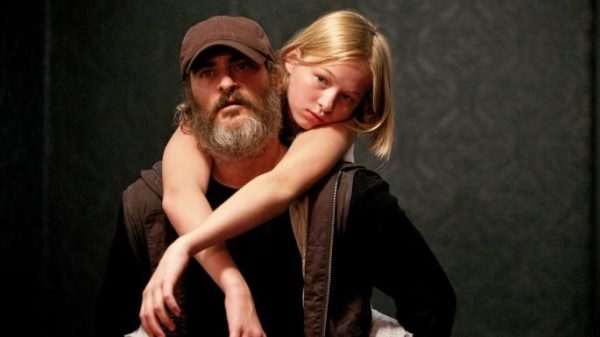 Visceral is the word that springs to mind when thinking about You Were Never Really Here. Running for just 90 minutes it is a pulse pounding tense thriller that has the ability to make you hold your breath for what feels like an eternity. When the film finishes there is an uneasy sense of relief and the realisation that you’ve watched something that you’ll think about for days.

Joe (Phoenix) is a severely traumatised veteran who tracks down missing girls for a living. When we first meet him he is silently screaming inside a plastic bag and there are flashes throughout of his violent past, from his time in the military and an abusive childhood. The theme of asphyxiation runs throughout alongside the crushing mental weight that Joe is carrying. Phoenix delivers a near silent but intense performance that won him Best Actor at Cannes. Phoenix’s performance is deafening in its silence. Whilst there is not a lot of clarity given about Joe’s past, there are just enough flashbacks to wind his psyche together. At times he is soft and caring and in moments of violence he disappears completely. His relationship with his elderly mother (Judith Roberts) is heart warming and a shining light amongst the despair.

Following up the disturbing We Need to Talk About Kevin (2011), Ramsay once again tackles extremely dark subject matter with this film. The theme of child abuse is at the forefront and PTSD is also shown. Adapted from the novella by Jonathan Ames, Ramsay strips back a lot of the exposition for Joe’s character and instead provides us with snippets of information so we can weave it together ourselves. It makes for an uncomfortable and uncertain viewing experience that left me thinking about scenes and moments long after the credits rolled. Her direction style is a combination of up close and personal shots which are then juxtaposed against wide shots and a feeling of emptiness. Ramsay is also careful not to make the film feel exploitative. Covering such dark material, a lesser film maker may have gone for the shock factor but instead we see Joe’s violence either from a distance or we see the aftermath. The same is said for the violence against children, it is implied rather than rammed down the audience’s throat. 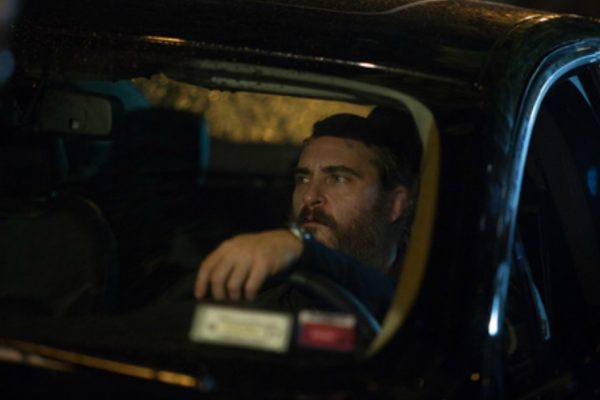 Alongside the tremendous acting and direction is the music. Radiohead guitarist Johnny Greenwood’s score is simultaneously loud and brash and at other times quiet and simple. Balancing the score along with Joe’s psyche and deterioration it at times feels like a cacophony of noise that Joe needs to drown out to function. It’s a tour de force and unlike any score I’ve heard before.

As uncomfortable of an experience as You Were Never Really Here is to watch, it is edge of your seat viewing. At times quiet and unassuming, and others brash and hyper violent it is a fascinating character study told at lightning pace.