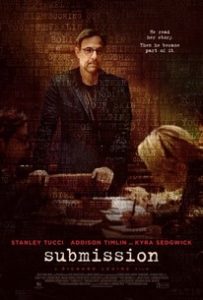 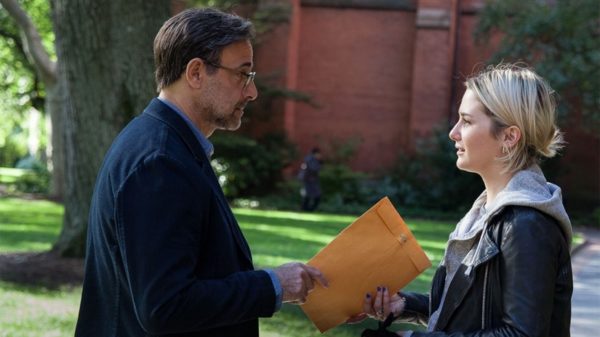 You can’t make an omelet without breaking a few eggs… or something like that as in Submission young aspiring writer Angela (Addison Timlin) is enrolled in a college creative writing course under the tutelage of a pseudo-famous novelist struggling to crank out a follow-up that lives up to the expectations of his first named Ted Swenson (Stanley Tucci turning in some of his best acting of the decade) and strikes up a flirtatious friendship with him after class hours to receive honest feedback on her work-in-progress debut book titled “Eggs”, which is actually about a young woman with a sexual desire for her teacher. The obvious parallel here is that Angela feels that same lustful craving for Mr. Swenson, who actually finds himself aroused reading the erotic tale.

As a married man, there’s no doubt that Ted is inherently in the wrong for allowing what starts out as initial advice and general thoughts to develop into a sexual encounter, but it’s clear that he is being whipped and used for a greater purpose. Keeping that in mind, he doesn’t do anything legally wrong (unethical behavior is certainly an unlikable attribute but hardly a flaw worthy of irredeemable damage to one’s reputation), he isn’t the one that pursues Angela in a romantic sense, but he does lack quality judgment skills during times that require challenging decisions to be made (a man not thinking with his dick is about as difficult as kicking a 50+ yard field goal in the Super Bowl during the fourth quarter with five seconds left and down by one). It’s important to note that he isn’t a sexual deviant and that his thirst comes from how bold he perceives her writing to be among a group of students that he loathes lecturing. 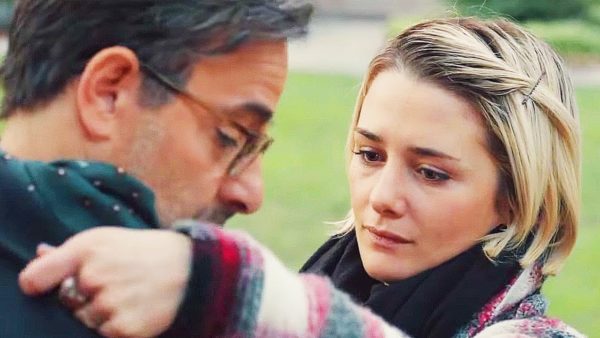 When Mr. Swenson tells Angela the writing is good, we’re not sure if it’s something he actually believes or if it’s something he is convincing himself so that his words of confidence can further the intimate dynamic growing between the two. It’s one of the more substantial aspects of Submission (based on the novel Blue Angel by Francine Prose, adapted for the screen and directed by Richard Levine), as I often found myself cringing at some of the overtly sexual writing and wondering that even if Mr. Swenson decides to show this to his publisher or not (a key plot point later in the film), would it actually get the green light? In a world where Fifty Shades of Grey was a best-selling trilogy that spawned commercially successful film adaptations, I suppose anything is possible. Maybe it genuinely would be something people would like to read.

Unfortunately, Submission is restrained by a solid script; I absolutely believe everything that happens in the movie could actually happen in real life (going one step further, this is definitely releasing at a critical point in time when it’s necessary to see perspectives of the #MeToo and #TimesUp movements in a different light), but there are a number of contrivances involving everything from missing tooth fillings to conveniently timed failing computers and a third act that doesn’t stick the landing in terms of emotional resonance. 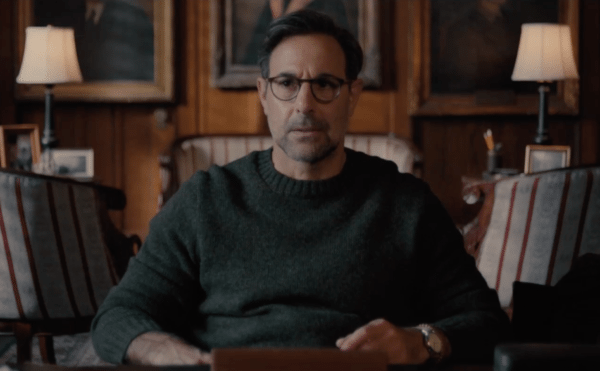 With that said, Stanley Tucci is great as a cross between carefree and miserable that his writing career has stalled to the point where he is now teaching at a random New England college, while Addison Timlin gives a real revelatory performance evoking strong anxiety and timidity regarding her writing quality and past trauma. She’s also highly duplicitous and conniving, effectively presenting both personalities. This isn’t a major spoiler, but it comes as no surprise that Ted’s wife as played by Kyra Sedgwick is made aware of the adultery, and she is given the opportunity to unleash fire on his cheating ass; it’s one of the film’s most memorable moments, but in general, Sedgwick has a multilayered role as a supportive doctor wife that isn’t afraid to rain down lightning on her man for his mistakes.

Submission is a fine film held back by a script full of convenient plot developments and flimsy writing; you want to root for it because of the committed performances and the timely presence of the narrative that, whether intentional or not, takes a unique position on sexual harassment in various workforces. All of it could probably be forgiven if the final portion wasn’t so rushed and anti-climatic, inserting footage of old movies to relay messages instead of having meaningful character interactions. Nevertheless, it is a cautionary tale for the consequences of men thinking with their dicks too much.