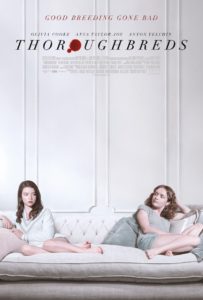 Two upper-class teenage girls in suburban Connecticut rekindle their unlikely friendship after years of growing apart. Together, they hatch a plan to solve both of their problems-no matter what the cost. 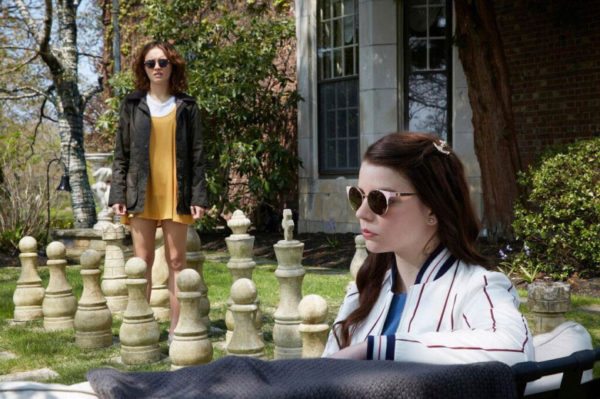 Typically, whenever a film asks audiences to give a damn about detestable characters (especially wealthy teenagers well-off in luxurious Connecticut suburbs that have far too much free time on their hands) it backfires into a cold and distant mess evoking no dramatic investment. First-time writer and director Cory Finley has sidestepped this all too common pitfall with Thoroughbreds by not going out of his way to demand viewers to care about the fate of the two sociopathic, schizophrenic, and all around generally mentally unstable high school aged girls attempting to rekindle a long gone friendship at its center; we’re in awe at their demented scheming, darkly humorous conversations, and the unpredictable nature of their personalities that allow the script to flip instantaneously on multiple occasions, so much so, that by the end of the film I actually grew myself to concern over what would happen to them.

Opening up with a startlingly uncomfortable shot seemingly depicting a young woman about to butcher a horse (not the only situation where the film’s title fits), Thoroughbreds has artistic sensibilities, but it refuses to dive too far down that rabbit hole; the photography is exquisite and often provokes one to think about what the image could possibly be saying. A shot of Lily (Anya Taylor-Joy continuing to impress in similar thriller roles) in bed trying to sleep with only one open eye in view of the frame, an underwater rescue sequence, an outdoors game of chess utilizing life-sized pieces, trippy editing transitions, and a blood-drenched climax filled with the one thing the girls in the story lack, empathy, are all striking images that heighten an uneasy atmosphere. For a debut feature, Cory Finley makes this look easy and has crafted an absolutely incredible first piece of work. 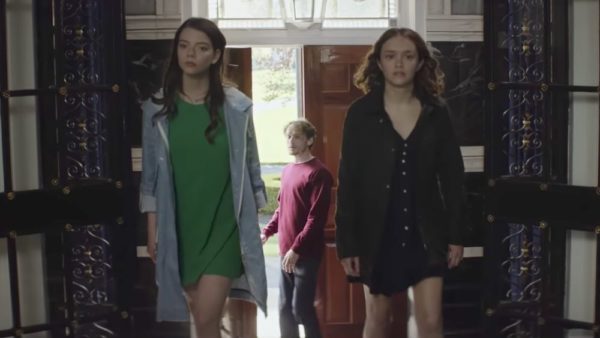 Pleasantly, the story gets rolling rather quickly as it is not long before the two troubled young girls hatch a plan to murder Lily’s stepfather Mark played by Paul Sparks, a man who treats his girlfriend like dirt and walks around the house in some of the goofiest sunglasses known to mankind while taking up some really obnoxious hobbies (one of them actually adds to the ominous presence of the percussionist heavy soundtrack) but does not deserve being murdered. Together, they employ the assistance of Tim, a low-level criminal known for selling drugs to teenagers and allegedly having sex with one in his early 20s played by Anton Yelchin (a talented young actor who sadly left this world too soon in a freak accident, turning in one final serviceable performance that is both enigmatic and useful for providing comedic relief) to do the dirty work for them while bullshitting up a pair of believable alibis.

Now, in the moment, this middle business can feel like a diversion from the possible upcoming murder or superfluous filler, but the character is actually necessary to drive the point home of the divide between rich and poor. Whether these psychotic women get away with their plans or not has no effect on the rest of their lives, as they are rich and can afford the priciest lawyers. The same cannot be said for the sleazeball trying to make ends meet by working minimum-wage jobs alongside his illegal activities. In a way, you almost feel bad he’s roped into this as again, for as ignorant and terrible a boyfriend Mark is, his greatest crimes are simply among telling Lily some harsh realities about how the real world operates. 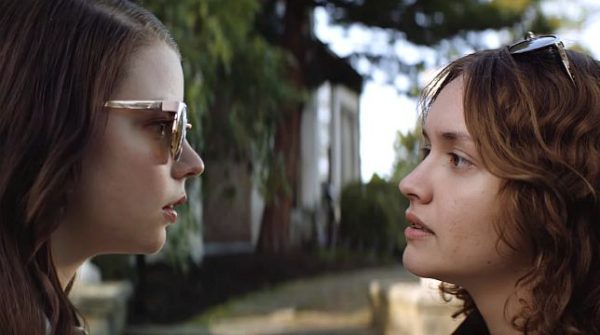 Of course, much credit has to go to Anya Taylor-Joy (The Witch, Split) and Olivia Cooke (Me and Earl and the Dying Girl) for successfully pulling off this tricky and bizarre dynamic that sees the pair swapping traits as the film progresses. Over time, Lily becomes less preppy and unhinged (disturbingly as if her true emotions and real-self are finally being revealed due to the proper button pushing from her crazy friend Amanda), slowly morphing into a character that should not be trusted regardless of what she says and who she is talking to. The ending dialogue exchange actually leaves open a good question that I’m sure will be debated strongly on both sides. The girls are oblivious to the value of human life, and by the end of the film still are in certain ways, but the robotic and deadpan conversations add a few layers of social commentary pertaining to technology and social media. To be fair, this may not be fully realized, but Thoroughbreds is one hell of an ambitious project.

Put it this way, during a backseat talk Tim labels one of the friends as “the crazy girl”… well, both are out of their mind and a good portion of Thoroughbreds‘ engagement and unnerving intensity comes from the unpredictability of who will emerge as the most mentally imbalanced. It consistently defies expectations thanks to a sharply written script that balances reprehensible characters with poignant themes to observe. Thoroughbreds is twisted brilliance analyzing everything from unhealthy friendships, repressed personalities, and how the modern world shapes these disorders. It may be early in the year, but this will absolutely be one of the best independent offerings of 2018; Anya Taylor-Joy and Olivia Cooke never cease to shine, and Anton Yelchin’s cinematic presence is once again confirmed to be missed.