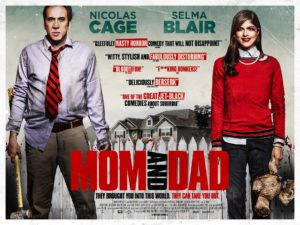 When the adults in a small American town start turning against the children for no apparent reason, a teenage girl and her younger brother find they have to protect themselves from the last people they would have expected.  Their mom and dad. 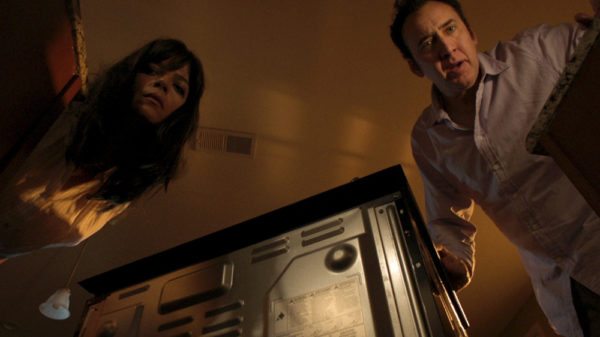 A Nicolas Cage movie.  A phrase to make you cheer or run for the hills.  There’s no middle ground, but even Cage’s most ardent detractors will admit that occasionally he comes up with something worth watching. Such as when he ventured into indie territory for director David Gordon Green in Joe (2013), which really allowed him to show off his acting chops.

In Mom And Dad, director Brian Taylor makes no attempt to restrain him whatsoever, giving him the chance to go right over the top.  And, not surprisingly, he obliges in spades, not so much chewing the scenery as devouring it in one gulp and doing it all with relish, aplomb and unrestrained glee.  And gore.  Don’t forget the gore.  This isn’t just the blackest of comedies, it’s also the deepest shade of red and it’s based on the simplest idea.  If you’re a parent, or have ever known one, you’ll know there are moments when, no matter how much you love your kids, you could kill them.  Which is pretty much what happens here.

Prepare to suspend your disbelief.  In a manicured American town, parents suddenly turn against their children in murderous fashion.  Their TVs may have something to do with it – suddenly showing snowstorms, Poltergeist-style – but that’s the closest we get to an explanation.  They’ve turned against them so much that they’re killing them: a mother leaves her child in her car on a level crossing to be destroyed by a train, parents besiege the local school to kill the kids.  Taylor turns his focus on one particular family, the Ryans, with their two children, teenager Carly (Anne Winters) and the younger Josh (Zackary Arthur).  Both parents are hell-bent on killing them, the deadly couple being Cage and Selma Blair.  And the youngsters have to fend them off, despite their deadly attempts becoming increasingly inventive.

Carly’s boyfriend, Damon (Robert Cunningham), gets mixed up in the carnage – after his own father has tried to kill him, of course.  The Ryan’s housekeeper is last seen in the vicinity of the bins, after using a blood soaked mop.  The death count goes up and up and the hideous injuries just keep on coming – such as when Damon gets a nasty case of wire coat hanger in the face.  But, however gruesome it gets, there’s always the laughs.  Lots of them.  Like when Cage and Blair are in the middle of their murderous rampage and the doorbell rings.  They immediately revert to being Mrs and Mrs Married Couple.  After all, it’s the night for his parents to come over for dinner.  Just think about it ……

Mom and Dad is no classic, it’s true, but Cage’s performance is as insanely over the top as the film.  He’s perhaps more batshit crazy than ever, but so is the film and he couldn’t look more at home.  Taylor keeps it all tight as well, even managing to squeeze in some flashback to Cage’s youth, which was all fast cars and girls – a dollop of mid-life crisis is thrown in for good measure, just before he completely loses it – so the running time comes in at just under a lean 90 minutes.  There’s the occasional nod in the direction of other films – Home Alone for one – and times when it’s unintentionally funny.  A father and son bonding scene between Cage and his son has the young lad enjoying a striped ice lolly.  Just keep an eye on that lolly.