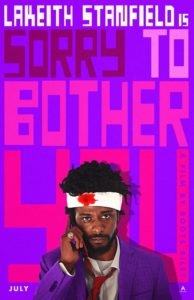 In an alternate present-day version of Oakland, black telemarketer Cassius Green discovers a magical key to professional success – which propels him into a macabre universe.

Being able to attend film festivals, one is prone to see several feature film debuts by promising filmmakers. Most of these turn out to be very personal dramas or films about walking and talking, but every once in a while, you get a bat-shit insane film that hits you in the head with a sledgehammer of originality and satire that leaves you dumbfounded and excited to see what’s next for the filmmaker. This time the filmmaker is Boots Riley, and the film is Sorry to Bother You.

Lakeith Stanfield finally gets an iconic character in Cassius Green, a struggling young man living in his uncle’s (the great Terry Crews) garage, with his artistic activist girlfriend Detroit (they seriously got Tessa Thompson!). His gets a telemarketing job but struggles to make sells over the phone – in the first of many bizarre elements of the film, every time Cassius makes a call, his desk drops to the recipient’s house; interrupting a couple having sex and even a man on the toilet.

One day Cassius’ co-worker, played by Danny Glover, advises him to adopt a “white” voice to be a better salesman (the voice being provided by David Cross, seriously). But just as Cassius starts climbing the corporate ladder with his newfound success, his co-workers (led by Steven Yeun) plan to unionize – forcing Cassius to decide between his friends and being a high-paid “power caller”. For real, though, how did they get this stellar cast? And I haven’t even mentioned Patton Oswalt, or how excellent Armie Hammer is as the company’s coke snorting, orgy-throwing, CEO.

Most times I see a film poster featuring so many recognizable names, I get worried. For every Spring Breakers, there’s a Movie 43 ready to waste its star-power. Boots Riley is not about to waste his cast, though, for each of the actors give a fantastic performance that perfectly balances bizarre behaviour with serious emotional development. Stanfield just went from character actor to star, perfectly portraying Cassius’ inner turmoil with emotional gravitas and lots of humour. Tessa Thompson is brilliant as Detroit, but it’s easy to get distracted during her scenes because of her amazingly huge and elaborate earrings. Armie Hammer just seems like he had the most fun during the shoot, he just doesn’t give a shit about anything and snorts a line of coke so long, Tony Montana would be jealous.

There’s honestly so much going on in Sorry to Bother You it’s baffling that Boots Riley managed to make a coherent film that’s still entertaining as hell. This is a bizarre, but good-looking film. Cinematographer Doug Emmett shoots an alternate-reality version of Oakland, with lots of blue and orange used to give the story a surreal dreamlike feeling with lots of symmetrical shots. Riley constantly draws attention to the extremity of his choices. Rather than Stanfield attempting to use a “white voice” he literally dubs over him. To show Cassius getting a bit of success, editor Terel Gibson cuts a montage where Cassius’ bedroom starts growing better things from within it – like a small TV splitting in half and a huge flatscreen growing out of its corpse. The magical realism of Sorry to Bother You is clearly like the bastard child of Charlie Kaufman and Terry Gilliam, but the visual language of the film owes a lot to Michel Gondry – who does get a small nod during a scene. 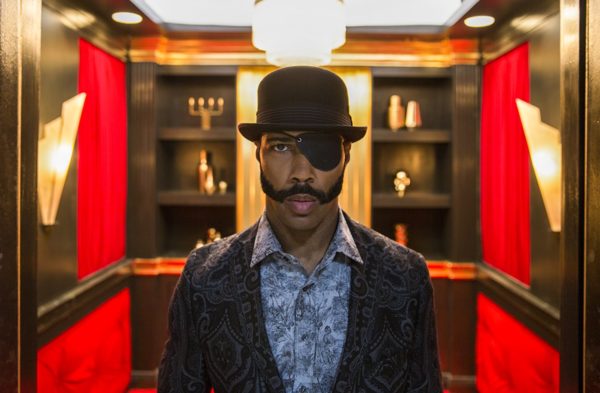 Not only is Sorry to Bother You a bonkers comedy, it is also an unapologetic tongue-in-cheek political satire with great world building. At times, the movie cuts to the most popular show in America, “I Got the Shit Beat Out of Me!” in which, you guessed it, people get the shit beat out of them. Boots Riley made a movie that’s guaranteed to keep you awake even at a film festival. A surreal attack on our culture of consumption, capitalism, the politics of the working class and the minorities within them, all while making room for mutated horse-men with ginormous penises.