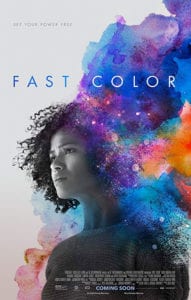 A woman is forced to go on the run when her superhuman abilities are discovered. Years after having abandoned her family, the only place she has left to hide is home. 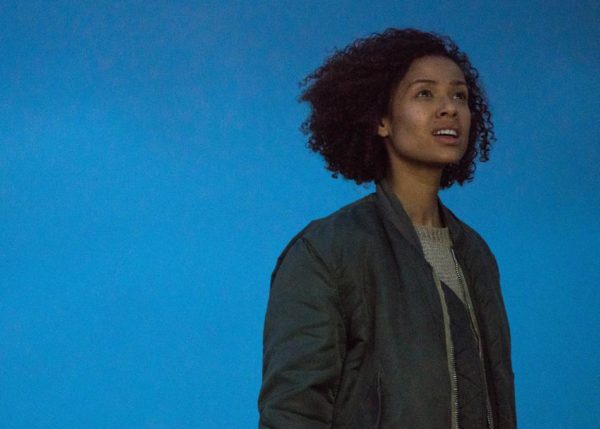 You’ll be hearing from a lot of people comparing Julia Hart’s latest film, Fast Color to a Storm origin story, and while you shouldn’t get your hopes up thinking this is a stealth X-Men film, they’re all right. This is the first superhero film in a post-Black Panther world, and the future is bright.

Fast Color is set in a prettier version of the world of Mad Max, a near-future where the Earth has gone dry, and water has become the most precious commodity. It is here we meet Ruth (Gugu Mbatha-Raw), a woman on the run from her past and from the damage her extraordinary powers cause. Ruth is prone to seizures that cause devastating earthquakes around her. Of course, some less-than-stellar organizations want to tap into that power by force. This forces Ruth to go back to her childhood home to seek the help of her mother Bo (Lorraine Toussaint) and estranged daughter Lila (Saniyya Sidney).

This is an impressive sophomore film by Julia Hart (Miss Stevens). Written by Hart and her husband Jordan Horowitz, Fast Color features a smart story that’s not only about superpowers, but about family and motherhood. At a Q&A after the world premiere, Hart spoke to her wish to make a movie about the real superheroes, mothers. There’s certainly a motherly theme throughout the film, and while you can remove the superpowers and still have the same theme and message, it’s the genre surrounding the story that makes the underlying theme resonate. The film has some striking imagery and as the title suggests, it makes beautiful use of colour to showcase the powers these women have.

The performances are great, and you the chemistry between the three generations of women is palpable. From Lila wanting more out of her simple life, to the past demons haunting Ruth and her trying to keep herself together – to Lorraine Toussaint’s amazing performance as a mother just trying to protect her daughter from the world and from herself. Contrary to the vast majority of superhero films, the powers these women have are not earned or used to destroy – there’s no scene where the protagonist learns to control her powers by destroying a town – but instead are a beautiful thing meant to create. That the superpowers displayed in the movie are a metaphor for being a mother and creating life is not well hidden, but it works because we are invested in the characters.

The language of the film compliments the story, but it’s the music by Rob Simonsen that’s the highlight. A synth-heavy music score follows Ruth while she’s on the run, the music being used to make the tension and fear of capture palpable – but once Ruth meets her mother and daughter, the score starts relying more on string instruments to make a beautiful and sort of angelical sound to compliment the characters’ powers.

We are entering a new age of superhero films, one where the powers are actually used to compliment simple but powerful stories about actual human beings, and if Fast Color is any indication, we are in for a wild and emotional ride.