David Dodgson reviews Crisis on the Planet of the Apes VR… 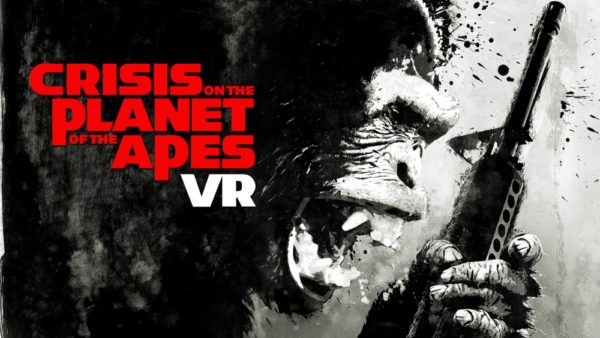 I invested in the PlayStation VR hardware last Christmas, intrigued by the potential for immersing myself within a game and ready to realise a new future in gaming. So far, I have been disappointed. The VR titles I have played have been plagued by poor controls, or they have been ‘experiences’ in which you are along for the ride more than to play the game. Crisis on the Planet of the Apes, despite its unique approach to movement control and setting in the current film franchise’s universe, does little to change my view of PSVR as having unrealised potential.

The game is set in the years after the Simian Flu has started to take its toll on the human race. You take the role of a captured ape, imprisoned in a research base where hostile survivors are experimenting on your kind in search of a cure. An escape soon ensues, and you must walk, climb, and shoot your way to safety.

The first thing that strikes me about the game is the appropriately apocalyptic atmosphere. The action takes place at night with the near constant drip-dropping of rain providing a backing track to your escape attempt. Your human foes are presented as desperate and dangerous, as are your ape allies. 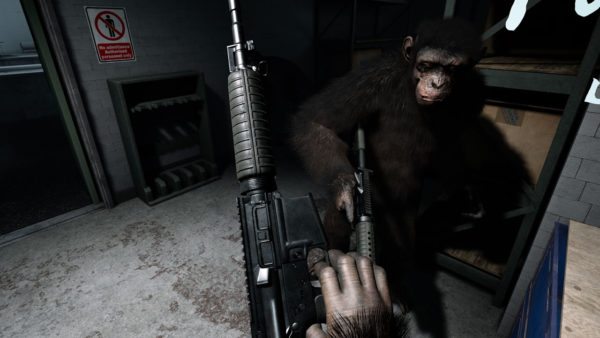 The second aspect of the game to get to grips with is the movement. With Move controllers in hand, you swing your arms like a chimp with its knuckles to the ground to navigate the play space. This approach certainly comes across as original at first, and I found myself hamming up the role early on (which would have made for a bizarre sight in my living room had anyone else been around!)

However, it soon becomes cumbersome. The immersion of making motions like an ape is soon broken once you realise that the path that is literally laid out for you in the game is not just to walk you through the tutorial – it is present throughout the gameplay experience. In an age where open world gaming experiences have become the norm, this feels incredibly restrictive. The feeling of control over the character is lost as all you do is point yourself in the right direction (towards the monkey outline) and follow the footprints. It is also slow and sluggish, so much so that you actually empathise with the guards berating you to get a move on as you are taken to your cell.

Climbing and swinging across pipes and beams also features heavily in the game but also suffers from similar issues. The path is clearly laid out by the bricks jutting out of walls, and again it is just a matter of turn and grab with little sense of climbing. Swinging comes across very much as simply moving your hands forward with little of the graciously smooth dipping and rising to be expected from an ape in full flow. Indeed, I found myself wondering how my head was passing through the pipes as my hands jabbed onwards from pipe to pipe.

Speaking of heads in places where they shouldn’t be, the constant appearance of the message ‘head inside object – move it’ also affected the flow of gameplay. When taking cover or transitioning between walking and climbing, this is an issue, and an especially infuriating one when you are under fire.

Combat consists of taking cover and picking your spots when your enemies show themselves. The fixed path of movement guides you into the cover spot and the AI pops up fairly predictably. The fact that it is easy to pick off the enemy is balanced out by the difficulties presented by the controls. It soon becomes repetitive, however. There is not a huge variety of weapons, and even when you handle a different gun, the experience feels the same each time.

The context and story for this game come from two sources – your own background knowledge from the film franchise and, more immediately, the conversations between humans that you eavesdrop on during your long, slow walks, climbs, and swings. These give an impression of the desperate plight the survivors find themselves in and also reveal their general contempt for the apes. They soon become one dimensional though. The complexities of the movies and the presence of good guys and bad guys on both sides is stripped away here to become the black and white of good apes against evil humans. 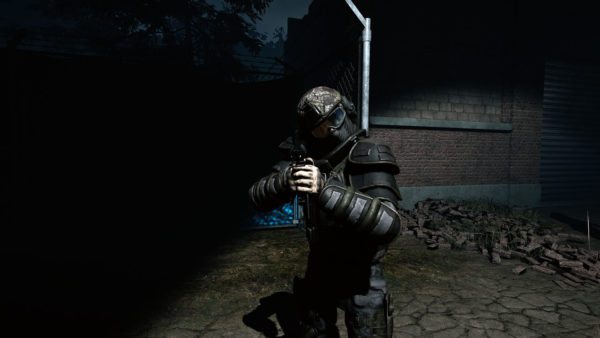 One final immersion breaker to comment on and one that leaves a lasting impression (though not in the way that was intended) – early on when you are admitted to the facility, you are made to extend your hand as one of the human guards holds out a red-hot brand. There is a moment of trepidation as the hot metal is slowly lowered to your outstretched palm, and then… in a split second it is over. Just a brief touch and suddenly ‘139’ is emblazoned on your hand. No searing sound, no elongated scream, just a clunk and it’s done.

That for me sums up the Crisis on the Planet of the Apes VR experience. At points, it feels ready to draw you in, but then awkward controls, forced sluggish movement, or a ‘head inside object’ message pull you back. At around 90 minutes to complete the playthrough, the game does not outstay its welcome, but it does not leave you wanting more either. Fans of the franchise may enjoy it but as a VR game, it feels like a good idea that just doesn’t quite come off, much like my general experience of VR so far.