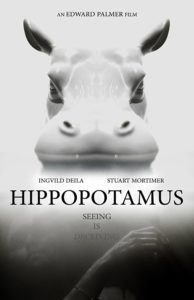 When Ruby (Ingvild Deila) wakes from a dream, she finds herself in a sterile basement, with her knees bandaged, unable to walk, and no recollection of who she is, or how she got there. When she comes face-to-face with her kidnapper (Stuart Mortimer), he tells her that she will remain in captivity until she falls in love with him.

Hippopotamus is a film to which an apology must made, because on the outside it appears to be another in the captive-girl subgenre that has given us some superb films of late; Room, 10 Cloverfield Lane, and Split. However, Edward A. Palmer’s micro budget drama unfolds in a way that makes you feel guilty for ever thinking you could second guess it based on its familiar premise.

Over the course of its refreshingly brief 77 min runtime, Hippopotamus evolves into something completely unexpected, and to reveal any more that that would diminish the impact of the final act.

The set-up is creepily effective, with the forced Stockholm Syndrome request unsettling enough, but then we learn that the kidnapper has also severed the ligaments in Ruby’s knees (ouch), and given her a course of medical treatment that involves painkillers and contraceptive (eugh!). He also places her handbag on a chair across the room, knowing all too well that she can’t get to it. The prison is set-up like the cruelest game of The Crystal Maze of all time.

Essentially a two hander between Deila and Mortimer, it helps that they’re both good in their roles. The latter coming off as Buffalo Bill lite, which is initially underwhelming, but as with the film as a whole, rushing to judgment is a big mistake, and his performance turns into something quite surprising. Deila is a strong presence on which to hang the film, making her easy to root for.

Working on an estimated budget of $5000, Palmer makes the most of his single room locale; shooting through doorways to accentuate the claustrophobia. The narrative construction of the film is also pretty impressive, with Ruby’s memory recollection bled into the plot as the muddied truth begins to become clearer.

Hippopotamus might throw a twist too many into the plot mechanics of the finale, especially when the penultimate one is so brutally cruel, but as an exercise in sleight of hand filmmaking, it’s an unpredictable, unconventional success.