Emma Withington gets hands on with Knights and Bikes…

As children, nothing is impossible and everything can be achieved if you try hard enough, right? You’ve not yet met up with our good ol’ pal Reality, or made questionable friendships with the likes of Failure and Disappointment. Knights and Bikes at its simplest embraces childhood whimsy, but its heart reveals one of the most deeply moving experiences in gaming today.

If you’re getting Tearaway vibes with hints of Little Big Planet, you’re not wrong – these titles were bread and butter for Foam Sword’s dynamic duo: Programmer Moo Yu (Ratchet & Clank/Little Big Planet) and Designer Rex Crowle (Tearaway/Little Big Planet). Knights and Bikes embraces the perspective of children through Demelza and Nessa with a charming, 80’s themed backdrop – channelling The Goonies and inspired by Snes era action-adventure RPG’s Earthbound and Secret of Mana.

We discovered that Knights and Bikes is all of these things and none of these things, as we chatted to the wonderfully energetic Moo Yu and got on the bikes for ourselves: “We wanted to make something that was fun, vibrant, and exciting – and the thing that immediately came to mind was childhood,” Moo tells us, “so we started thinking about when we were growing up, what were the really cool stories? We thought about Steven Spielberg films like The Goonies and ET, so we started with that kind of premise. As Rex started drawing from his own childhood in Cornwall, we realised we didn’t want to make a game like one of those movies. We wanted to make a game like our childhood!” 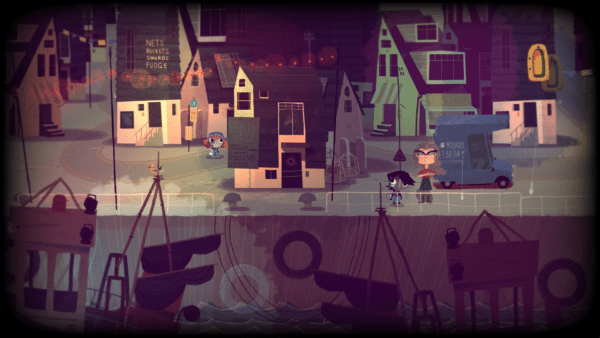 Demelza’s father is feeling the financial pinch and is struggling to hold his life together, as Penfurzy Island falls into ruin and they face eviction. She’s read all about the ‘legendary treasure’ in her story books and vows to save her father by embarking on a quest with her best friend Nessa to find it. Nothing will stand in the way of this flame-haired firebrand – not even reality itself.

Growing up we all wanted to be the hero, didn’t we? A daring adventurer who could overcome anything, no matter what. For the first time, a real-world obstacle lands in front of you, but you’re too young to understand that solving it is, to the grown-ups, ‘complicated’ (yawn). But, you continue to dream and imagine ‘saving’ those you love in your own unique way: “We drew on the idea that, children in hard situations can use their imagination to make something better out of it. You haven’t yet had those crushing experiences where you’ve tried your best and it wasn’t enough. You’ve got all this energy, you can try something new and there’s always another way! Whereas, as adults, we’re often like, ‘no that won’t work’ or, ‘there are no other options.’ I remember being a kid, it was great, and you always felt like there was a way to solve every problem – which is such a great attitude to have!” 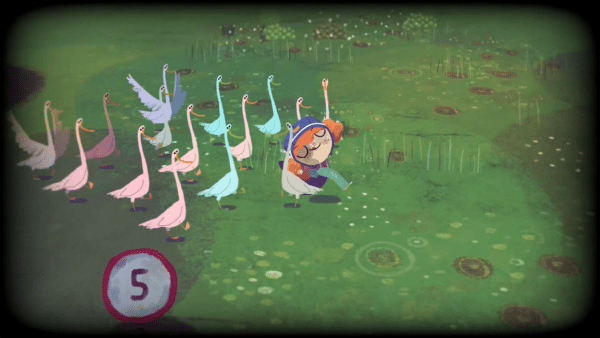 Playing through the preview in co-op, which is by far the best way to play, you rapidly regress to childlike glee. As soon as we discovered that you can pet geese, we spent a solid five minutes giggling and in-game high-fiving – as the goose would happily totter around behind you and join you on your adventures. From plucky geese to battling knight’s gauntlets with super-charged frisbees and putting out fires with water balloons, our trusty bikes would always be there to drive our adventures forward:

“The bikes are a really important thing. We remember the experience of getting your first bike; until that day you’re always waiting on your parents to take you somewhere and you can only go where they will take you. The bikes represent the first time you get a bit of freedom – you can explore the world with your own eyes and make your own decisions on what you’re doing and where you’re going! We wanted to capture that moment in life where you encounter a new world that’s bigger, how you adapt to it, and how you deal with this overwhelming new sensation, by also maintaining that exciting, infinite feeling.” 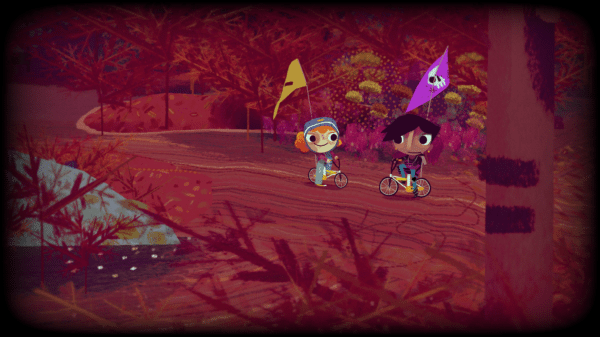 As we raced each other to the next area I quickly realised that you need to maintain a sense of stamina. An inhaler stamped over my character’s face on the screen, before allowing me to set off again swiftly. As an Asthma sufferer I was taken aback by seeing something that represented such a realistic childhood limitation that I, personally, related to, while not treating it as an overall restriction on their quest. It’s there, but you can be a courageous adventurer regardless:

“We wanted to make sure, gameplay-wise, the constraint would mean that you could only supercharge your bike so many times in a row, so we looked at what a child’s perspective on a physical limitation of energy would be. We didn’t want to be setting our game mechanics to cool-down bars and clocks, but a limitation that would mean they have simply over-exerted themselves, and need a tiny bit of time to re-energise. We just thought that an inhaler was the exact kind of thing – it captures the idea that, ‘I pushed myself a little too hard – I need to pace myself and take a short break’; but it was also really important that in almost no time you would be ready to go again!” 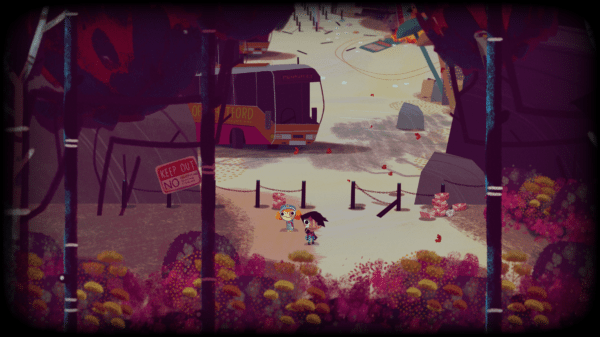 Where we see a dilapidated scrap yard, Demelza and her friend Nessa see a castle to be infiltrated and a pathway to adventure which must be unblocked. Illustrated beautifully by chalk outlines, overlaying the heaps of metal and rusty fences. This creates a simplistic, but powerful tool to reopen your eyes to a child’s vision. No matter how much or little they have to hand everything is giant, epic, and exciting with brand new discoveries to look forward to around every corner. The scrap yard itself is a perfect metaphor for the adult mind, it’s a big old mess with heaps of crap in the way of opportunity.

We do, however, blunder into an office and by the looks of things make matters worse, as the computer screen flashes: ‘DELETING EVERYTHING’! Adult brain screams, oh no – all that work! The child brain says, so what? Try again. Reality sucks, but that doesn’t mean they have to give up: “(Demelza is full of ideas) they may be bad ideas, but at least she’s trying!” emphasises Moo, “all the adults on the island have given up in the mindset that, ‘we’re not a popular tourist destination any more, so what can we do?’ but Demelza is determined – she will find a way!” 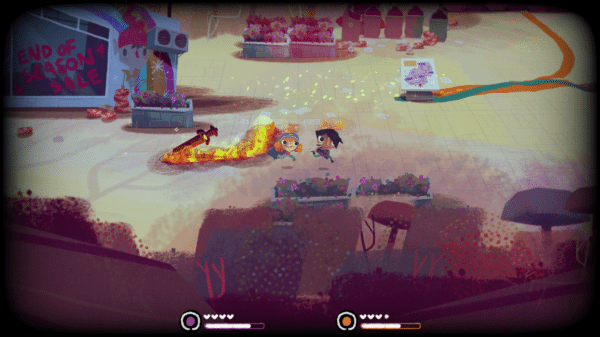 Before we leave, I overhear a father and daughter playing Knights and Bikes together. She talks excitedly about the castle and the wizard in the tower and her father, very naturally, says what he sees to begin with – a scrapyard. It’s not long until he’s just the same as his daughter, as they start to dream up crazy schemes together and race each other on their bikes toward further adventure. It’s difficult not to smile at the sight of them. For me, they reflect the purpose of the game perfectly.

Knights and Bikes is a game designed to bring people together, adults, children, friends and families – in whatever form – as you work together at the best of times and pull through at the worst of times. A reminder to appreciate and nurture the curiosity of your inner child, by allowing yourself to find an alternative and never giving up. Go on that adventure – turn that council estate into a fortress and open up your possibilities. It’s never too late.

We can’t wait to see more of Knights and Bikes, in the meantime check out the trailer here…