Filming is underway on the latest adaptation of H.G. Wells’ seminal alien invasion epic The War of the Worlds. The BBC production is currently on location in Liverpool, and now we’ve been given a first look at our Martian dodging couple, played by Rafe Spall (The Big Short, Life of Pi) and Eleanor Tomlinson (Jack the Giant Slayer), looking suitably panicked on the streets of Edwardian England. 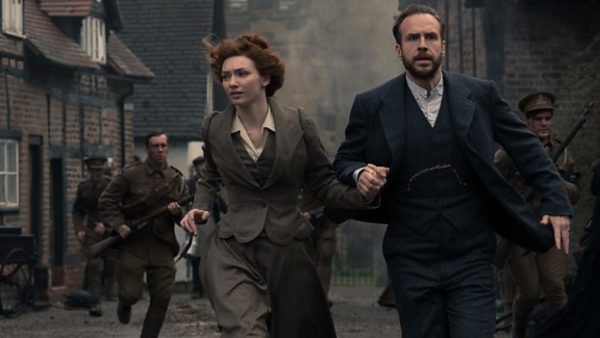 The three-part mini-series will be the first adaptation of the classic novel since Spielberg’s Tom Cruise blockbuster in 2005, and will focus on Spall and Tomlinson’s relationship, which goes against the conventions of 1900s England, only to take a back seat when the invasion begins. Joining the resistance will be Robert Carlyle (Trainspotting) and Rupert Graves (Sherlock).

Throughout the years there have been so many iterations of The War of the Worlds, including the infamous 1938 radio transmission, which was read by Orson Welles, that the creative team have been quick to point out that how this will be different, with writer, Peter Harness stating that: “The version of The War of the Worlds that I wanted to make is one that’s faithful to the tone and the spirit of the book, but which also feels contemporary, surprising and full of shocks: a collision of sci-fi, period drama and horror.”

No official release date has been set, but all indications point towards Christmas.