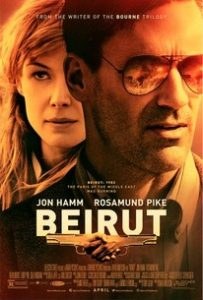 Caught in the crossfires of civil war, CIA operatives must send a former U.S. diplomat to negotiate for the life of a friend he left behind. 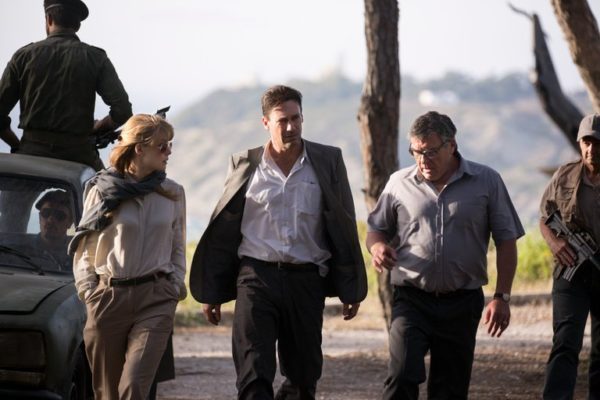 Beirut is a competently directed espionage thriller located centered on a host of high-ranking Americans working out the Civil War in the titular foreign territory, but director Brad Anderson (most known for the underappreciated Christian Bale gem The Machinist, bringing to life a script by Tony Gilroy that sat on a shelf for 25 years due to marketability restraints and other such nonsense reasons that recent hits like Best Picture Argo have made irrelevant) leaves a highly intriguing dynamic underdeveloped.

The hostage situation at the center of Beirut involves sunken U.S. diplomat Mason Skiles (Mad Men‘s Jon Hamm pulling off a balancing act between heavily depressed boozer and situational intelligence comparable to a gifted Texas Hold Em’ player) dragged out of his personally controlled rinky-dink Boston law firm back into the capital of Lebanon, specifically requested to mediate a deal as the kidnapper is actually an adult version of the 13-year-old Palestinian boy named Karim Abou Rajal (Idir Chender) he once took in as a refugee and lovingly cared for as his own alongside his, then alive, wife. Also fascinating is that the American prisoner is the former close companion of Mason, Cal (Mark Pellegrino). The two friends became estranged after a luxurious pre-Civil War Beirut party went sideways with multiple parties including Karim’s terrorist brother mounting a siege on the mansion that ruined the lives of many others at the expense of forcibly reuniting himself with his younger and innocent brother. In a fitting role reversal, Karim is now the one resorting to acts of violence and terrorism to free his brother from what is believed to be Israeli captivity. 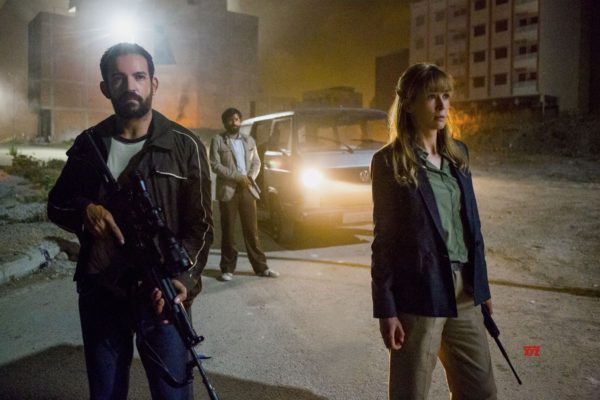 Keeping that in mind, midway through Beirut is a heated dialogue exchange in the back of a van between Mason and Karim that brings the misguided soul to tears. He briefly reexposes a soft side, but more importantly the side of him that still respects the man that gave him a home. Unfortunately, Beirut misses the opportunity to capitalize on this fractured relationship in favor of taking audiences behind the scenes of political affairs that barely register as engaging, primarily because not a single person can be trusted and they all have little to no character development despite being embodied by notable actors Dean Norris, Shea Whigham, and more. It quickly becomes clear that everyone has their own agenda leaving Mason and his assigned CIA agent tour guide Sandy (Rosamund Pike playing another of the film’s underdeveloped individuals) as the only people actively concerned with rescuing Cal. He contains valuable information that could be dangerous in the wrong hands, essentially becoming safer to expend rather than secure. Of course, a few of the Americans are also up to no good.

All of this puts Mason in a “Don’t Trust Anyone” style affair filled to the brim with narrative twists (Tony Gilroy is responsible for the Bourne franchise after all), surrounded by violence in the streets and bombs going off all captured in environmental backgrounds with enough booming audio and terror to effectively insert the audience into 1980s Lebanon (considering that the Israeli-Palestinian conflict is still ongoing, but also may be reflective of current events as well), also nicely juxtaposing it with the celebratory happy times of the early 1970s. However, solid performances aside, Beirut lacks an edge and excitement; the best scene in the film is arguably the opening burst of action, steadily declining from there while sporadically coming alive. 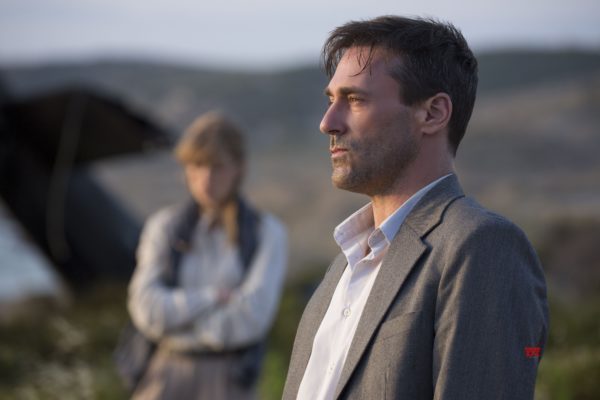 It should also be pointed out that there is a recent influx of films focused on the Israeli-Palestinian conflict in some form, which is fine, but none of them seem to be saying anything of worth beyond the disappointing fact that there is still not yet peace. Beirut has a unique approach going for it but squanders it in exchange for monotonous scenes of expository dialogue and all factions scheming against one another. Still, an intense turn from Jon Hamm and the degree of unpredictability are enough to hold it together. Watching an alcohol problem not hold someone back from performing their duty is certainly refreshing, and there are rewarding nuances to look out for regarding Mason’s consumption. If anything, the filmmakers were the drunk ones, spinning a dizzying yarn stacked with forgettable supporting characters.