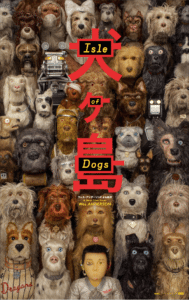 For his second stop motion adventure, West Anderson delivers a seemingly simple story of a young boy Atari (Rankin) searching for his lost dog Spot. After an outbreak of snout fever, all the dogs in Japan are sent to Trash Island and live in exile and eventually die. Whilst this is extremely dark, as with all Anderson films there’s a sense of whimsy and offbeat humour to accompany the material. A pack of dogs run by stray Chief (Cranston) see Atari crash-land on the island and they decide to help him find his lost dog and the adventure ensues.

All of the beats of a Wes Anderson film are on show in Isle of Dogs. The stop motion is glorious to behold and in a world of CGI and millions of pixels it’s nice to see so much work going into what we see on screen. The meticulous details of a deadly sushi meal being prepared through to the trash cubes that make up the island and the quirks for each dog are fantastic. Anderson once again pulls together an impressive ensemble vocal cast and the usual suspects are here: Bill Murray, Jeff Goldblum, Tilda Swinton etc. In their recent honest trailer for Wes Anderson films, Screen Junkies joked about how he has become a genre in himself and they’re not wrong. Watching Isle of Dogs it is inescapable which director is at the helm. The dialogue is overly expositional, the jokes aren’t obvious and the lonely lead dog Chief fits in with Anderson’s repertoire of isolated heroes. Yet somehow Isle of Dogs doesn’t feel formulaic.

Set against the backdrop of Japan, much has been said about the issue of cultural appropriation. Personally I didn’t find any issues but I could see a lot of stereotypes on display. In a bold move, Anderson chooses to have his human characters speak in their native Japanese and are only translated either via interpreter (McDormand) or an exchange student (Gerwig). Whilst this does make it difficult to connect with some of the human characters, this luckily does not have an effect on the young boy Atari at the heart of the story. So much is conveyed in the delivery of his dialogue and the dog packs response to it, that no translation is necessary. The confidence Anderson has in his audience’s ability to follow the story is commendable. He also helps us along with clearly titled chapters and labelled flashbacks.

As well as the stunning visuals, kudos has to go to recent Oscar winner Alexandre Desplat for his amazing score. Mixing traditional taiko drums with some jazz style influences makes the score unexpected and powerful. At times it feels whimsical, then moves swiftly to mortal dread and then back round again.

Isle of Dogs isn’t Anderson’s crowning achievement (for me that’s The Life Aquatic but I know I’m one of the rare few in this camp) but it is a heart-warming story of a boy looking for his dog. After so much dog mutilation in his previous films it’s good to see the dogs come out on top for once.