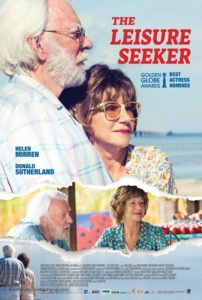 A retired couple decide to take a road trip to Florida in their aging Winnebago, called The Leisure Seeker.  He’s suffering from Alzheimer’s and her health is failing, so their children are frantic with worry.  But the couple take to the road on a journey where they make new friends and discover more about each other than they expected. 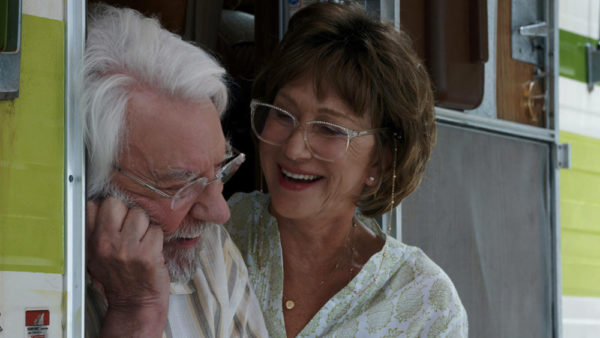 It may be yet another of those films aimed at the grey market, but thankfully The Leisure Seeker doesn’t commit one of their cardinal sins.  At long last, a film for older people that doesn’t patronise the audience by assuming it will sit through any old rubbish.  It’s a blessed relief, but that doesn’t mean that the film is especially good, or worth its illustrious leads, Helen Mirren and Donald Sutherland.

Retired couple Ella (Mirren) and John (Sutherland) take a trip that seems like his last holiday ever but, as the miles rack up, that becomes less clear.  Their plan is to travel south in their past-its-sell-by-date Winnebago to Florida to visit Hemingway’s House.  Former English teacher John is a huge fan of the writer, but he’s never seen it.  Ella, on the other hand, can take the author – and, indeed, literature in general – or leave it, but her love for her husband is such that she agrees to the trip.

A road movie, then, and one that looks like taking a political direction.  The opening scene is played out against the sound of one of Trump’s election speeches – all about making America great again – and a backing track of Carly Simon’s It’s Too Late.  The promise of pithy political commentary is just within reach – and then whisked away never to return.  OK, there’s a later sequence involving another pro Trump gathering, with John joining in innocently, but that’s your lot.  And it’s symptomatic of the fundamental problem with the film.  It has the potential for something thought-provoking and moving, dangling that promise at you but then falling short all along the way.

Which turns it into a tortuous journey and a very episodic one, with too many mini dramas along the way.  They disrupt what could have been a more enlightening narrative developing the relationship between the couple even further.  Yet again, it only goes so far and leaves so much unexplored.  And some of the incidents on the road simply don’t belong or convince, especially the ridiculous one involving a mugging.  They’re often a distraction and sometimes even an irritant. 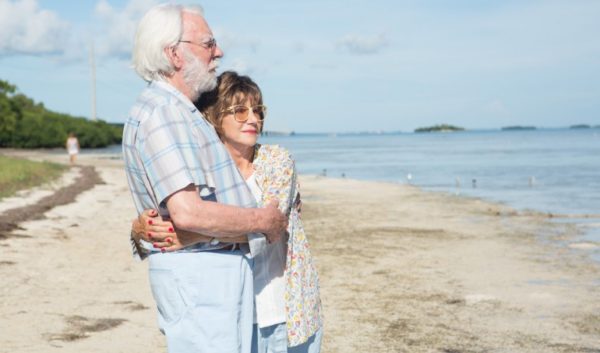 Despite the impression created by its trailer, this is no rose tinted comedy.  The indignities that can go with old age and illness aren’t glossed over: Mirren throws up more than once because of her meds, Sutherland wets the bed and his trousers, as well as struggling with an unreliable memory.  That she allows him to drive The Leisure Seeker is perplexing and she’s no saint when it comes to coping with his forgetfulness and irrational behaviour.  She loses her patience, especially when it comes to his obsession with her former boyfriend, and you can hardly blame her.  But when he has moments of lucidity and is back in the real world, the fierce bond between them is transparent, as is her crushing disappointment when the man she married is suddenly snatched away from her.  The clouds descend over his mind and it’s like the flicking of a cruel switch.

While Mirren and Sutherland both give warm, compassionate performances, they are let down by a below par script, one that dodges the issues at the film’s heart and leaves the audience stranded with an ending which could have been moving but ends up being profoundly depressing.  But maybe that’s because you can’t avoid thinking about all the potential that the film has squandered.