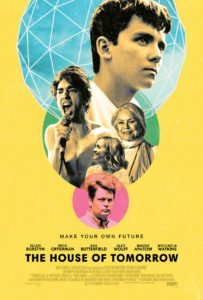 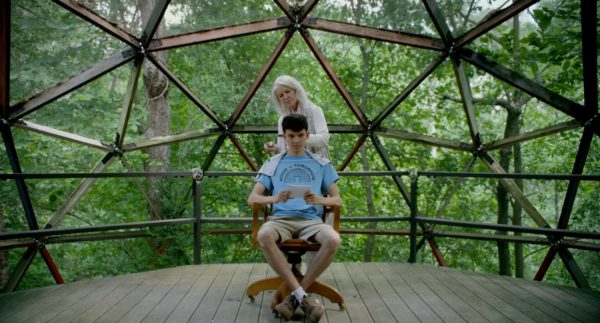 While clearly not intended to be a biopic, credit should be given to The House of Tomorrow (the latest writing and directorial effort from Peter Livolsi, and based on the book by Peter Bognanni) for finding an indirect and roundabout way of paying tribute to the great architectural mind, inventor, and theorist R. Buckminster Fuller. Taking place in the current day, Josephine Prendergast (legendary actor Ellen Burstyn, who actually once met Bucky with that footage present in the film as a subtle touch) cares for her grandson Sebastian (Asa Butterfield, who basically gets to replay the same character from last year’s The Space Between Us) inside of a geodesic dome surrounded by grass and sheltered off from society. His one job is taking visiting families on tours of the dome, preaching Bucky’s message of preserving energy and building a better future, or in more casual terms, the hippie lifestyle.

One of those families involves a divorced religious father (Nick Offerman) trying to instill some of those same values in his teenage children; his son has a heart transplant and is essentially living on borrowed time with the pipe dream of performing a punk rock concert. The House of Tomorrow is one of those quirky comedies filled with random contrived occurrences solely existing to push the plot forward, so when Nana has a stroke within the first five minutes just so Sebastian and Jared (Alex Wolff) can become friends in the hospital despite their totally opposite personalities (Sebastian speaks more like a robot and doesn’t even understand what an iPod is while Jared is rebellious and well, a punk in nature), the incident doesn’t exactly set a promising example for the proceedings.

After the two are forced to begin email communication by Jared’s father, they begin hanging out together where we realize that they aren’t so different after all (yawn). Jared has no friends but also wants to start a punk rock band, and Sebastian is along for the ride doing anything asked of him, even if he’s ordered to steal musical instruments from the church classroom. To be fair, the bonding between Sebastian and Jared is the least of the film’s problems, but it is incredibly formulaic and predictable, punctuated with a sentimental ending that wouldn’t feel out of place on the Hallmark channel, which is made all the more confusing considering that the narrative sounds like something that would appear in a family-friendly experience, but here is littered with F-bombs and songs about female breasts.

Instead, everything around these two budding friends feels fake and underdeveloped. Sebastian quickly develops a crush on Jared’s sister Meredith (Maude Apatow) which is perfectly reasonable, considering his complete lack of social interactivity, but the romantic feelings soon become mutual in ways that don’t feel earned. Also, as a result of sneaking out of the dome and putting off his research duties in favor of rocking out, the relationship between son and grandmother becomes fractured leading to some silliness trying too hard to generate drama worth investing in. However, there is an interesting dynamic between Jared and Meredith depicted as siblings that, despite the fact Jared is deathly ill, engage in nasty verbal arguments out of an unorthodox definition of love for one another; they’re trying to keep at least one part of their family consistent and normal rather than express unwanted pity. In general, Maude gives the best performance in the movie, especially considering her limited screen time. 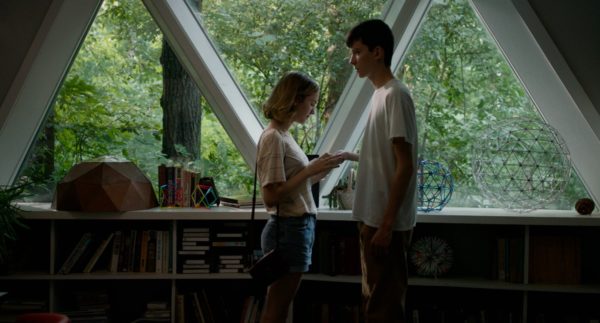 As you can probably guess without actually watching the film, the throughline here is that society must work together to improve the earth, and account for all different kinds of belief systems. This is actually done with restraint until the ending that is like getting smashed in over the head with a hammer; Fuller was a punk too! The connection between rebellious music and inspiring personalities is certainly a tricky one to pull off, and The House of Tomorrow technically does accomplish that, but the story as a whole and characters deserve better than the amateurish scripting and cringe-inducing comedy on display here. It walks the line between decent and bad quite a bit, but once Ellen Burstyn starts physically attacking her grandson it’s time to mentally check out and ride out the cliché ending.