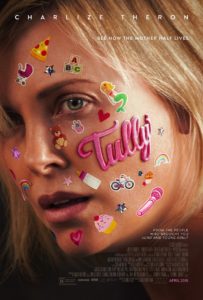 Marlo, a mother of three including a newborn, is gifted a night nanny by her brother. Hesitant to the extravagance at first, Marlo comes to form a unique bond with the thoughtful, surprising, and sometimes challenging young nanny named Tully. 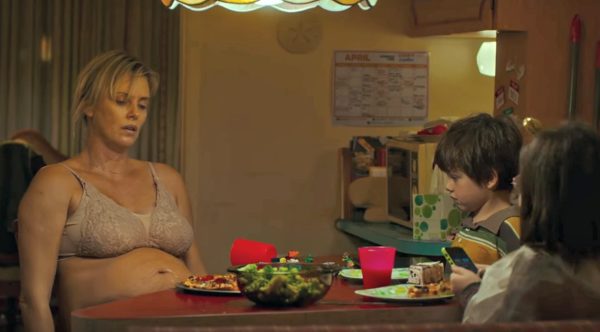 Typically exaggerated and played for laughs, motherhood undergoes a more grounded and realistic depiction in Tully (Up in the Air director Jason Reitman’s new film scripted by Juno‘s Diablo Cody); At the forefront of this stressful struggle is Charlize Theron’s Marlo, an overworked mother currently pregnant with an unplanned baby (her third total together with husband Drew as played by Ron Livingston) regularly tending to an average elementary school aged daughter naned Sarah and Jonah,an unpredictable young boy who has some form of social and behavioral dysfunction that doctors are unable to pinpoint. Two children are already overwhelming, but it’s like they say, three is a crowd, and in this case, it just might be the end of Marlo as she jokingly contemplates killing herself.

At the request of her brother Craig (Mark Duplass), Marlo takes the plunge on the uncomfortable scenario of hiring a night nanny to regularly stay the night watching over her newborn baby Mia. There is a plethora of awkward situational humor here, most notably as the titular Tully, an early 20s slim and beautiful free spirit played by the underrated but often tremendous Mackenzie Davis, who routinely heads upstairs whenever the precious little one is awake and ready for breastfeeding to wake up Marlo, at one point casually watching from inside the bedroom as if her unorthodox persona is completely standard. In many ways, Marlo wishes she could be Tully, or maybe she once was, but it’s evident from initially meeting that simply being around the caretaker sets off self-conscious alarms as she takes issue with the revealing clothing the nanny has deemed appropriate for work.

Expanding on that thought, Tully touches on the frustrating realities that I would assume many women go through after giving birth, both in the sense of putting dreams on hold to settle into a traditional married mom role and the unflattering physical transformations that strain the body, which both continue to do so after having more children. Charlize Theron, even in her 40s, is an unquestionably beautiful woman, so studying such a noticeably transformative performance in terms of body definitely adds another layer of authenticity on top of her incredible acting range (a particular scene where she unnecessarily but understandably blows up on a school principal is a heated display of mental pressure reaching a breaking point, and is easy for women in similar situations to relate). You can credit the makeup department all you want and deservedly so, but equally important is that Charlize Theron understands Marlo’s midlife crisis from a psychological and physical perspective,

However, the characters around Marlo feel underdeveloped and conveniently written to allow the narrative to take some oddball detours. When all is revealed by the end, it is very well possible that audiences will have just as many questions as they do answers as to why certain characters sometimes act out of their personality. The moment where Tully jumps the gun is likely a segment that will unanimously be agreed upon as far-fetched (I can accept and know that people in real life engage in this specific activity, but not here so soon, built up trust or not). Jonah’s specialness (described as quirky by those politely trying to say that there is something wrong with his mind) only feels designed that way as an artificial method to place more stress on Marlo, which also goes for the gaming bedroom potato that is Drew. Technically, it is mentioned that he assists in making lunches and although we do get a glimpse of him helping the children with homework, he is also a workaholic that has his focus on everything but his marriage that clearly has cracks. Admittedly, there are some hilarious lines perfectly delivered by the children commenting on Marlo’s improved productiveness after hiring Tully, but these are broadly drawn characters. Tully would rather toy with the audience then address dramatic issues. 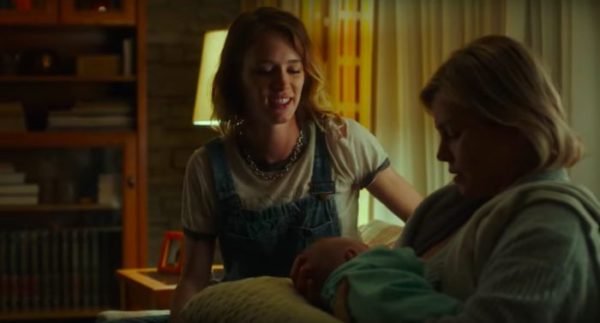 Still, that doesn’t take away from all of the goodwill earned beforehand. Montages of early childhood caretaking, female bonding over multiple topics ranging from lost dreams to opposite personalities, finely crafted jokes, and a pair of strong performances are all enough to win Tully a recommendation. It’s a reminder to women everywhere to criticize their bodies much less if at all and is a sincere look at the avalanche of chores that compromise raising children mostly alone. There is a deeper dynamic going on between Marlo and Tully (one that is extra effective thanks to Charlize’s commitment to the role and due to the fact that Mackenzie Davis could probably pass for a very young version of the actor) that is going to elicit mixed reactions, but also thought-provoking responses. Realistically, a bunch of stressed-out mothers are also going to come away from this film ready to hire some night nannies, so in that regard, the film is adding to the discussion on modern-day parenting in a nonjudgmental and intriguing manner.