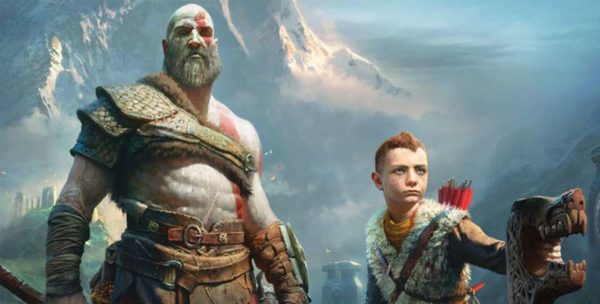 Some eight years removed from the release of the last core God of War game, the blood-soaked hack n’ slash franchise has been effectively rejuvenated by series veteran Cory Barlog with this staggeringly creative – if decidedly tamer – soft-reboot. Though perhaps not quite the radical, Resident Evil 4-esque reinvention some are eagerly touting it as, the new God of War nevertheless finds the series at its most gorgeous, thoughtful and mechanically involved.

This retooling of the iconic, ultra-successful IP sees Barlog and SIE Santa Monica Studio making a concerted effort to broaden its appeal, fleshing out both narrative and gameplay while stripping away the most dated elements which would certainly seem problematic to many today (namely the rampant sexism of those earlier titles).

While there are sure to be those fans who will view the series’ shift away from shamelessly efficient brutality as a mild “betrayal” of its roots, the rewards speak for themselves from the game’s first few moments. If the narratives of the previous God of War games felt almost comically convoluted, even to the extent of being quite forgettable, 2018’s game nudges the God-slaying shenanigans to the cheap seats while foregrounding the relationship between brutish God Kratos and his young son Atreus.

Though it’s easy to glibly compare this dynamic to The Last of Us, it’s fundamentally quite different beyond the obvious teamwork and familial aspects. When the game begins, the pair is preparing to scatter the ashes of Atreus’ mother at the highest peak of the nine realms, an indefatigable quest which will cause the pair to have run-ins with numerous antagonists not-so-thrilled about their presence. That’s to say nothing of the decidedly more charming characters who will conversely assist the two on their journey.

There’s a tender intimacy to stakes that are this low-key and personal that no number of cataclysmic, world-ending threats can muster. And while Kratos and Atreus’ main quest brings them into contact with literally dozens of towering, impossibly aggressive antagonists over the course of its 15-20 hours, it’s all contextualised masterfully within decidedly human terms. If you swore off prior entries because Kratos seemed boring or unrelatable, that’s unlikely to be a complaint this time around. 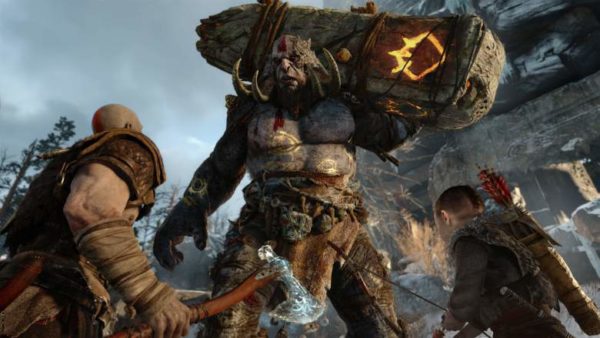 That’s enough said about the story because, honestly, it’s a good deal more involving than most fans of the series will probably expect, and to that end it’s best not spoiled. Regardless, the gameplay is what brought people clamouring to the franchise in the first place, and Barlog and his team have done a mind-bogglingly impressive job of shifting gears from the original series’ more unapologetically retro, button-bashing carnage (and that’s no criticism of those games).

The button-mashing and QTEs are mostly gone – save for a few choice moments – while it’s no longer possible to simply breeze through most fights by sheer force alone. Combat has been given a major tactical overhaul here, requiring the player to perform a dance of sorts as they attack and dodge enemies, and make clever use of Atreus’ stamina-eroding arrows. The game never becomes infuriating on Normal difficulty, but if you’re not paying attention to the threat indicator or struggle to switch-up abilities on the fly, you’ll find yourself suffering immensely for it.

Though the first hour or two will certainly be an adjustment period for long-time fans of the series, soon enough the combat mechanics begin to feel second nature, as muscle memory takes hold and you no longer have to remind yourself to pound the square button to pepper enemies with a barrage of Atreus’ arrows.

The sheer wealth of abilities the game throws at you – especially later on – can make it tough to keep track of every possible move available to you at a given time, but I never found myself dispassionately rehashing the same cheap attacks ad nauseum. It is a game that makes you feel extraordinarily capable, but also dishes up intense foes in kind.

While the combat itself is a major change from prior games – complete with Kratos’ Blades of Chaos being switched out for a Leviathan Axe, which can be hurled and retrieved in ultra-neat Thor-esque fashion – the most glaring refinement is actually the world and how Kratos engages with it. 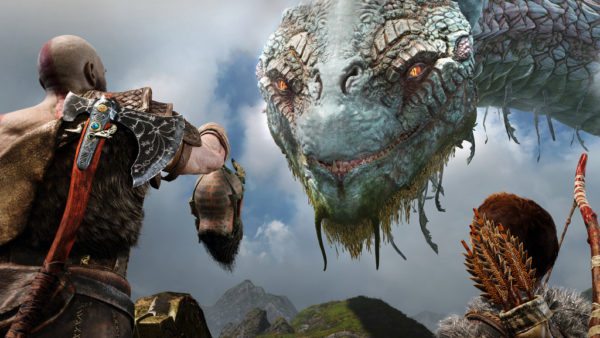 The previous games generally placed the player on a linear path, yet here you’re free to explore a number of the nine realms – which progressively open up throughout the journey in spectacular fashion – in what’s not-quite an open world, but nevertheless a sprawling, feature-rich hub of connected yet aesthetically diverse lands.

It’s incredibly easy to deviate off the set path if you so wish, whether merely to gather resources or tackle any one of the countless side quests littered around the worlds. These range from comically simple murder-fests to immensely challenging battles against ultra-powerful enemies much tougher than anything in the main quest-line. Rarely do they feel like out-and-out busy-work, perhaps because the game does such a remarkable job of not forcing the player to grind for resources. Players are quite literally showered with hacksilver and XP alike, so you’re never more than a few encounters away from the next tasty upgrade, be it a nifty ability or a new piece of armour.

Given the tendency for AAA game development to rely on excess slogging disguised as “progression”, it’s enormously refreshing to see a game find a near-perfect balance, where powering-up Kratos isn’t a chore, yet the game doesn’t become a cake-walk either. Balance is really the keyword here; this is a game that makes almost all the right choices, rarely doing too much or too little in any one area.

The pacing, for instance, is among the best I’ve ever experienced in a game; while many games inundate players with combat to the point of exhaustion, here the critical path provides plenty of breaks to rest up and soak in the world violence-free, but at the same time, if you’ve got a hankering to bury an axe in something’s face, potential vics are never far away.

There are certainly minor quibbles, for sure. There are a few moments of backtracking that feel a little redundant, though their necessity is somewhat understandable given the nature of the hub world. A more comprehensive fast travel system wouldn’t have gone amiss, though. Also, the game’s boss fights largely pale in comparison to the more heightened, shamelessly absurd battles of previous games. 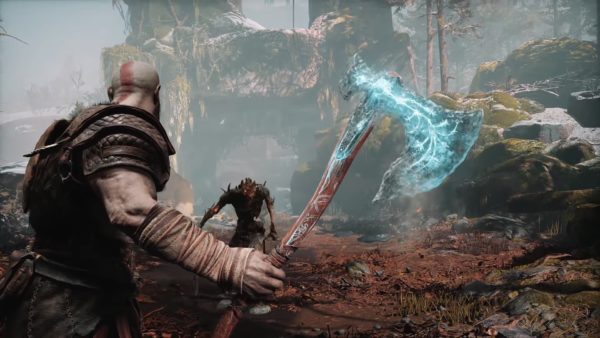 Yes, there are a few masterfully-crafted ones – especially an early battle that feels like a glorified superhero grudge match – but generally most of the bosses follow a disappointingly simple attack pattern, and once you know the knack, they can be felled rather easily. The is especially true of the fairly anti-climatic final boss, which is so straight-forward you’d be forgiven for assuming another boss fight was to follow. Still, these are issues that do little to hamper the brilliance of the overall product, and they can certainly be remedied in the inevitable sequel.

Unless you’ve been living under one of those giant rocks Kratos uses to smash trolls’ heads to pieces, you’ll probably be aware that God of War is one hell of a ravishing game. You needn’t have splashed out on a PS4 Pro to be left slack-jawed at how mind-blowingly beautiful this game is, such that you’ll probably easily forget the game’s dizzying combat runs at just 30 fps on a base PS4.

The environments, character models, general animation and particle effects are all insanely detailed, and combined with a bewilderingly impressive “single shot” camera system, make a compelling argument that this just might be the most visually mesmerising game available on consoles. As a feat of development, it is a most uncanny masterwork.

The sound sure isn’t bad either, benefiting immensely from Bear McCreary’s suitably booming, poignant musical score, a deliciously nuanced suite of combat sounds, and superb vocal performances from a diverse cast, best of all Christopher Judge as the gravel-voiced protagonist himself.

Rarely do games feel as singularly visionary as God of War; this is a rarest of AAA games with no whiff of publisher interference or executive meddling whatsoever. Almost entirely fat-free while still serving up literally dozens of hours of worthwhile, value-filled entertainment, that it does this alongside an unexpectedly visceral and emotionally involving story makes it an elite, towering accomplishment that a sequel nevertheless has the potential to build and improve upon. 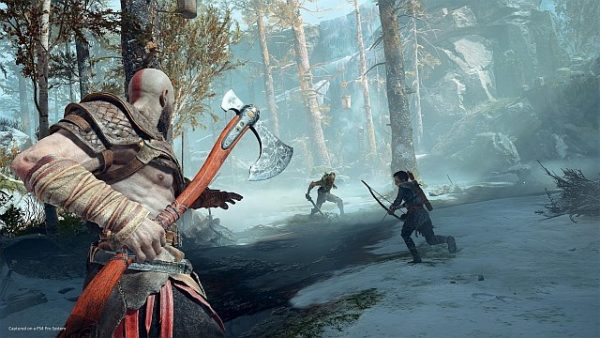 Cons:
– A little too much backtracking.
– Some boss fights could be better.