Villordsutch reviews Star Trek: The Next Generation: Through The Mirror #5… 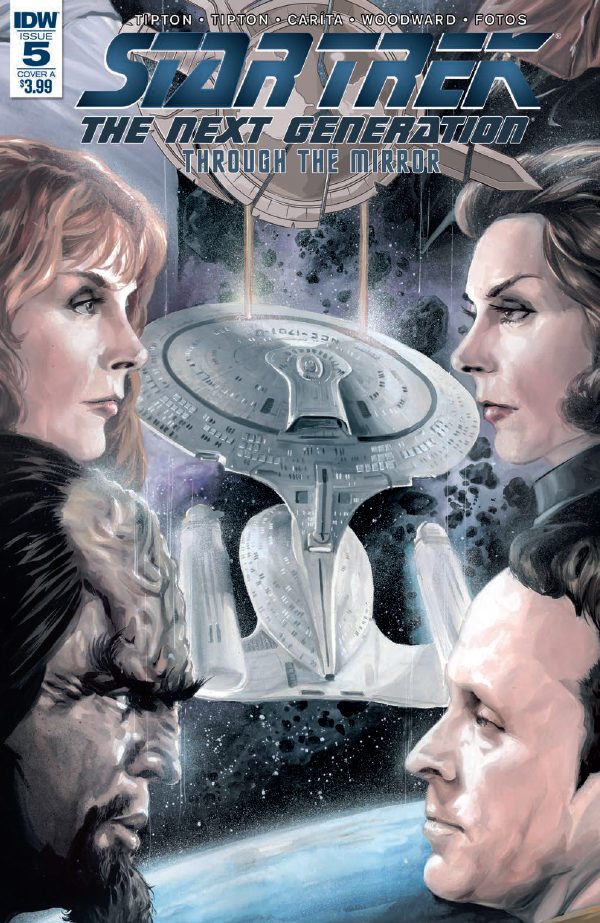 SEE ALSO: Check out the preview for Through the Mirror #5 here

And so we arrive at the final issue of Star Trek: The Next Generation Through the Mirror from Scott and David Tipton.  At the close of Issue #4 Mirror Picard’s endgame was finally revealed to us, his master plan is to transport numerous Enterprise-Ds from alternate Universes to help rebuild both the Empire and his wealth.  Though there is a hyperspanner in the works in the shape of the crew of the Enterprise-D from the Prime Universe, for Prime Picard and Co. realised something underhanded was afoot aboard their vessel. Elsewhere, many months ago, Mirror Data was just about to make presumed dead Spock an offer he couldn’t refuse.

With the opposing crews standing toe-to-toe – phasers drawn on each other – threats are traded before all Hell breaks loose aboard the Mirror Enterprise.  In amongst the phaser fire around the corridors of the ship, Mirror Picard gives the order to begin the final move and Prime Picard knows he and his crew must race against time to not only discover what this twisted crew are up to, but to put a stop to it whilst attempting to stay alive at the same time.

Months earlier Mirror Data confronts Spock and pressures him to reveal the information regarding the Alternative Universe.  With Spock unwilling to divulge said information, it begins to get somewhat violent for those assigned to protect the Vulcan.

Over this special month-long series, we’ve been treated to IDW Publishing delivering us a different artist each week for our fix of Star Trek and this has to be commended.  I personally have wanted to see a different selection of artists on this series for a longtime (not knocking the talents of Tony Shasteen here) for it adds variety and I get to find some new favourite artists along the way.  So Star Trek: The Next Generation: Through the Mirror deserves a rather impressive thumbs up for that.

Now the positive is out-of-the-way, unfortunately I have to turn to the negative.  This final issue of Star Trek: The Next Generation: Through the Mirror wasn’t enjoyable at all.  I know this is science fiction and we have to suspend our disbelief for a small moment of time, but here in this issue I found myself thinking, ‘Wait a moment!?’.  Take for example the two crews facing each other nose-to-nose, yet when Mirror Picard orders his crew to open fire, “Kill them all!”, Prime Picard and crew manage to not only escape without a scratch, but to make it up to the Bridge and work out a way to disrupt the dastardly plan.  Which seems to be shooting a bunch of balls in a net.

There’s more messy problems within and anyone picking up the issue will find them.  This is truly upsetting as, being honest here, the last time I was left slightly disappointed with something from the Tipton Brothers was around 2013 with a couple of their Doctor Who tales!

The other thing that really brought me down was the Spock “Story B” conclusion.  We knew the end last week!  I was hoping that this week we’d see something of a twist for Mirror Data, perhaps Spock revealing 100% of the information, but Data only gave Mirror Picard 80%; saving the best for himself.  Nope. J.K. Woodward was just asked to extend his art on last week’s conclusion.

Returning to a positive upon closing however the art from Débora Caritá is excellent, though it has to be said her alternative cover got my hopes up that we were going to see something fantastic within the pages. 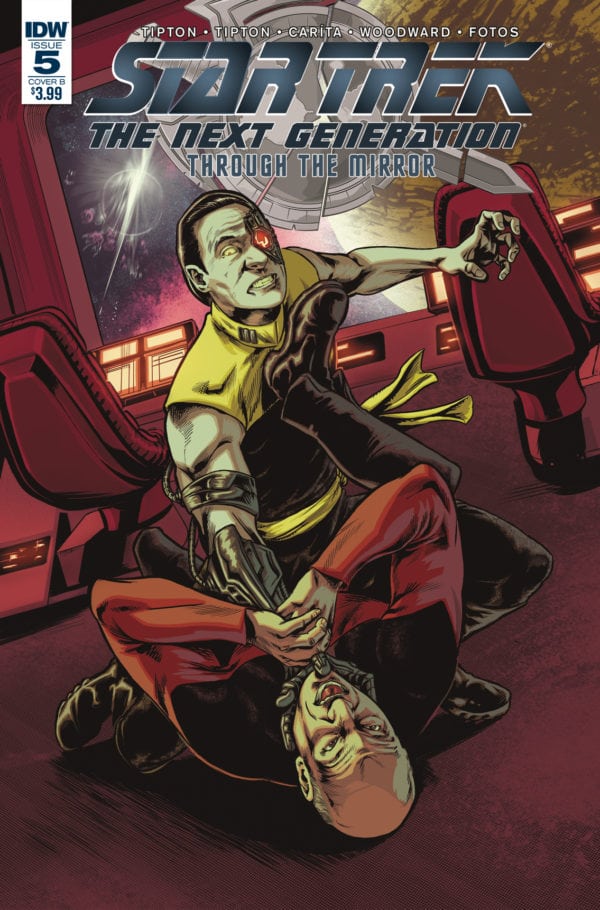 Star Trek: Through the Mirror is a rather disappointing close to a series that has skirted around the enjoyable over the last month.  A shame really, perhaps it’s time the Mirror Universe was left alone for a while.