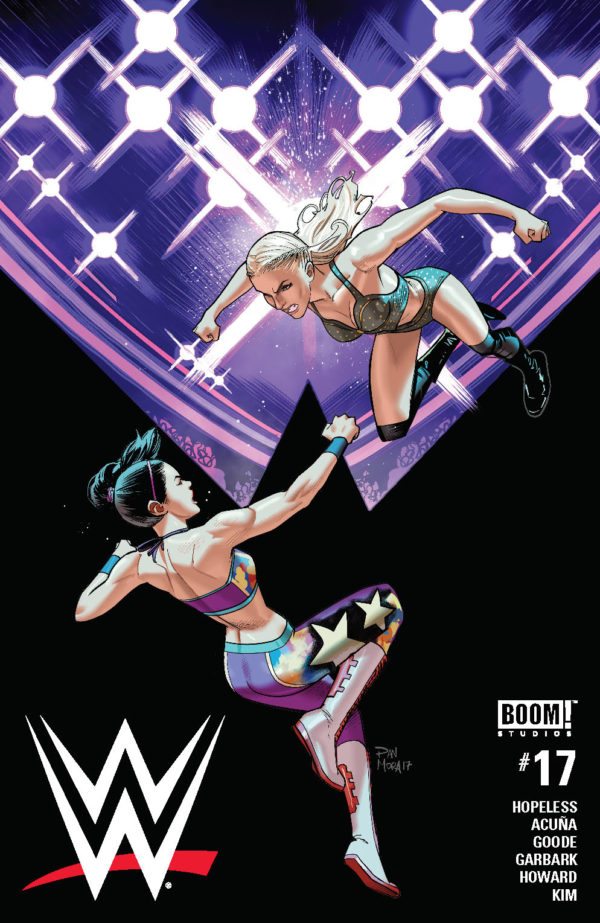 The story of the Four Horsewomen was seemingly brought to an end in the most recent edition of Boom! Studios’ WWE comic series, with Bayley finally making her arrival on the main roster in a tag team match with Sasha Banks. Once again, having the female centred story at the centre really worked, and I’ve really enjoyed the way the writers have blurred the line between reality and kayfabe. Little touches to Bayley’s character, such as her wearing Macho Man slippers, really just add a little something to the character and make her feel more relatable.

With the saga focusing on Bayley’s quest to get to the top, it seems fitting that her story would end when she makes her debut, but it’s a shame that Boom! Studios have decided not to explore any more of the Women’s revolution, as it feels as though there is so much more to tell.  Once again, Serg Acuna and Kendall Goode’s artwork is consistent and they do an excellent job of both their characters and the in-ring action, while Dennis Hopeless tells a great story. In the next issue, it looks as though we are promised ‘The Sami and Kevin Show’ which should provide some interesting character work, given the two men’s well-documented history together.

Sadly, the comic’s other story, ‘Though she be but little, she is fierce’ has fizzled out quite badly. The stories, which have documented Asuka’s rise to the top, have just felt incredibly rushed and really lack in any sort of excitement. The artwork, especially of Asuka, in this issue, is also not too strong, and it stands out more because Acun and Goode have given such an excellent rendition of Asuka earlier in the comics.

WWE #17 is a nice way to close out the women’s storyline in the series, it’s just a shame that they won’t be continuing to explore the Women’s Revolution going forward. This has been the most enjoyable run in the comics, and it’s a shame it had to end so soon.