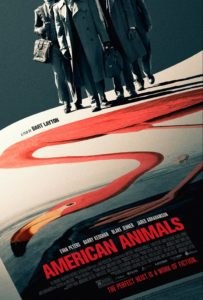 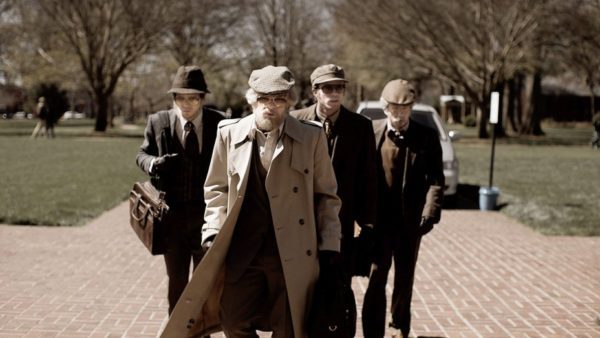 “Animals” are wild at heart. Restless when caged. Capable of lashing out despite better judgment in unpredictable ways when lulled into a state of dull contempt. Domestication subdues only for so long before there reaches a point of restless objection, which is the very basis of Bart Layton’s American Animals. A true crime hybrid that both retells and reimagines 2004’s monumentally botched Transylvania University “Transy Book Heist” that would have been worth $12 million in literature/artwork – *would have* translating to “What if?” for four thoughtless adolescents. An “opportunity of a lifetime,” arrogance in youthful abandon and the assessment of consequence only capable in hindsight. This ain’t 2004’s The Perfect Score (2004? Conspiracy?). Actions carry repercussions, no matter how attainable Hollywood makes the impossible seem.

This based-on-a-true-story reported out of Lexington, Kentucky incorporates the actual culprits as talking heads who try and make sense of their on-screen once upon a times. Barry Keoghan the picture-perfect Spencer Reinhard, Evan Peters his free-spirited partner Warren Lipka. American Animals details how these unlikely collegiate bandits – along with bored student Eric Borsuk (Jared Abrahamson) and gym rat Chas Allen (Blake Jenner) – attempt to steal priceless works of art including a massive tome of John James Audubon originals. “Joint casing,” Ocean’s Eleven rewatch prep, Reservoir Dogs nicknames – kids acting out fantasies that never should have escaped from their pot-smokey basement. A catastrophic cloud for those involved and those caught in the middle (Ann Dowd as librarian Betty Jean Gooch).

The duality Layton achieves between Hollywoodized excitement and gut-wrenching admissions is a modern patchwork marvel. Too often filmmakers sway one-sided. A Pain And Gain that rifles through illegal proceedings for the most palatable screentime (proficient, nonetheless) or some History Channel feature that infodrops full force into biographical factoids. American Animals not only proves that you can employ both – splashy not-so-keen robbers pack a tragic punch – but showcases the strength in perspectives. Peters jests as a Hunter S. Thompson without the smarts, yet it’s all wincing laughs as we know lifestyle ruination awaits. Layton never insinuates our “protagonists” to be in the right – and then the big-as-a-boat shoe drops. Every subject recoils at the memory of Betty Jean hogtied, conscious and tased. 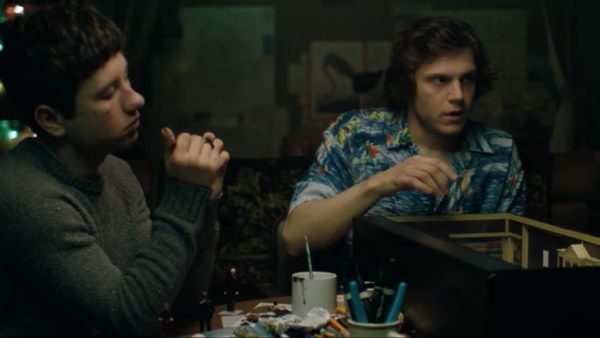 I absolutely *love* how Layton reinforces this blanket excuse/belief. It’s so integral to the story’s payoff. Every materialized representation, every interview, they all repeat the same ideal – no one will get hurt. Yet someone did. Betty Jean Gooch served the unfortunate purpose of protecting the priceless pieces locked inside Transylvania’s Special Collections Library, and Warren was supposed to handle her awareness alone. Just like in the movies, right? Where down-on-their-luck schemers get away with stolen treasure? The greatest trick American Animals pulls is introducing loved, privileged sons and siblings who squander potential but never outright establish their lineage. Lawful Good, Chaotic Evil, Neutral – maybe systematically failed and forced into archetypes, but are they justified? Like I said, no one was supposed to get hurt, but here we are.

The reveal of Betty Jean Gooch plays like a nuclear trump card. Her soft-spoken, faithless wondering brings otherwise uncaring Warren Lipka to tears and renders Spencer Reinhard hazily choked. American Animals rapidly devolves from a buddy gang-banger with up-tempo beats to a somber slice of humble humility. We get to experience the thrill of expectations along with the crushing low of acting against an innocent party – illuminating, with no regret. Layton’s manipulation is as much a commentary on reckless cinematic bravado without responsibility as it is a cautionary rebuttal to the illest conceived get-rich-quick plans. The last words of *real* Betty Jean planting like a haymaker that redefines the two-or-so hours previously spent tagging along for fun.

Performances across the board urge both rookie comedics and regrettable angst. From Peters’ inability to convince us specific details weren’t fabricated by Warren (Udo Kier’s European contact) to Jenner’s concerned, very rational breakdown when assuring just how compromised their mission has become. Keoghan begs for a sign to derail Spencer’s bad decision locomotive that seemingly can’t be stopped, but it never comes. Pause, loyalty and golden gates drive evolving actor portrayals just as Layton’s multi-headed beast sprouts yet another pair of eyes. Jenner as the most “Chas-y” Chas, Peters and Keoghan masters of rudderless confidence in the worst, most dismissive way, but Abrahamson leaves the most lasting impression as a numbers wiz with literally nothing better to do. Or, better – an unchallenged FBI hopeful pursuing the easiest degree route to enroll. Nailed on every layer, from “why not” reasoning to “what the HELL am I doing” fight-or-flight circumstances. 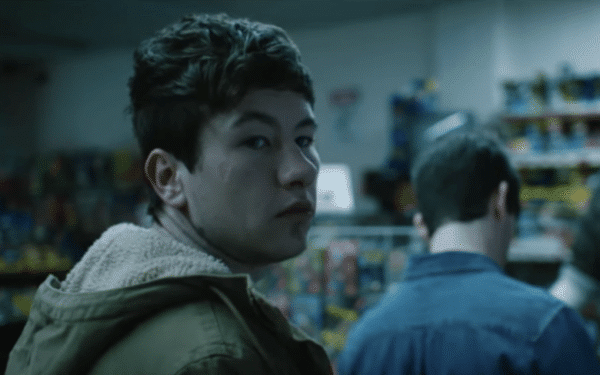 American Animals is not the beast you’d expect. Trailers sell a smash-and-grab student caper with prosthetic disguises and unstoppable spirits, but Bart Layton calculates a balanced and burdensome thriller rooted in details similar movies so often glance over. Lasting damages, long-standing reputations, remorseful confessions – somehow Layton packages the sincerity of The Thin Blue Line with The Bank Heist’s charms. You call it a trick, you call it a ruse, but I’ll call it some of the most impressively sustained storytelling hard-pressed to be beaten this year. I, Tonya but with the actual participants and a clearer message. Impulse can be a nasty sonofagun.