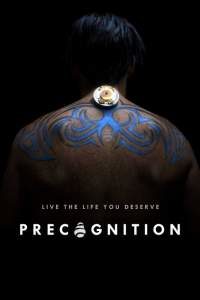 In the near future, a man experiences terrifying visions of a past he can’t remember. His partner, who secretly works for a company that manipulates memory, attempts to uncover the mysteries surrounding them.

Exploring a nefarious world where memories cannot be trusted, Precognition is a thought-provoking sci-fi film with a good balance of concept driven plotting and action scenes. The low-budget pick for the Sci-Fi London film festival is a great example of original ideas backing up the story, and should appeal to fans of psychological thrillers in the sci-fi mold.

Concentrating on the near future technology of implanted memories and reality, the film follows James as he begins to experience visions of a woman he has never seen before. His wife, Samantha, secretly works for the organisation – named ‘Ripe technologies’ – that creates and manipulates memories. As she digs deeper into his mind, she is unable to find out a way to correct the memories, and ends up risking both their lives in order to uncover the truth.

Taking in a wealth of influences and examining different notions of identity and personality, the film plays with notions of what is considered normal and what could be achieved by fully harnessing computer technology into the brain. The dangers of what can happen when humans no longer know what is real and what is fantasy is dramatically brought to screen with a mixture of beguiling stories interspersed with explosive action sequences.

The world described in the film appears to be working as a kind of parable for our own times. Questions of how much in control of our futures we really are pop up like insistent alarm clocks while taking in this debut feature from Luke Tedder.

The beating heart of the film looks at our reliance on computer technology, and how computer tech’s promises of a happier, more fulfilled life hide a far darker reality. Putting these kinds of fears about the future into the context of today’s reality is part of the job of good sci-fi, and the film does this rather well.

Precognition also does a great job at keeping the audience guessing as to where it’s going. It’s packed to the gills with original ideas and concepts, which along with a great looking visual sense, provides a strong option for those looking for exciting new sci-fi. A markedly good sci-fi film that doesn’t reveal its low-budget too obviously – indeed, the effects and visuals look like coming from a far more expensive flick – the film is a solid addition to the list of new sci-fi features.

Precognition is showing at the Sci-Fi London Film Festival on Sunday 6th May. Details are available at Sci-Fi-London 18.