With $783 million at the global box-office, more than The Passion of the Christ, at least domestically, life is pretty sweet for Wade (Ryan Reynolds). That’s all about to change though, as tragedy strikes, leaving the Merc with a Mouth at his lowest ebb, just as a time-travelling cyborg named Cable arrives in town, hell bent on destruction. 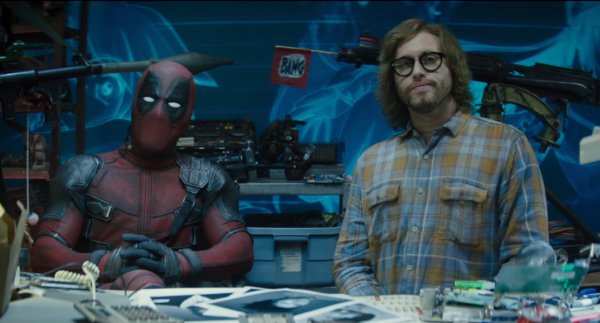 During the most recent trailer for Deadpool 2, our spandex sporting potty-mouth discussed the idea of a sequel in one of the many scenes that didn’t make it into the final edit, which is hardly surprising given the throw as much as possible at the screen and see what sticks approach that John Wick co-director David Leitch takes. Wade makes a meta statement that “It lives up to the hype, plus plus”, and for much of Deadpool 2 that is undeniably applicable, but there are times when the “plus, plus” just results in generic tedium, and that’s a criticism which couldn’t be leveled at the first film.

It’s the opening thirty minutes in which the sequel soars higher than Rob Delaney’s film stealing cameo as skydiving hero Peter. The first gag is an absolute doozy, which sets a very high bar, and by the time you get to the inspired Celine Dion accompanied credit sequence, you’ll feel at home in this world of wonderfully unhinged chaos. There are more laughs in the extended prologue than most contemporary comedies can manage in their duration.

The first Deadpool sustained this by having a unique frame upon which to hang the laughs. The self-referential piss-take approach was fresh amongst a genre that had a penchant for taking its ludicrousness too seriously, and don’t worry, there are still jokes at the expense of DC (“Martha”) and Marvel aplenty, but the novelty of that being able to provide the foundation of the entire film has now worn off, and the writers must come up with a plot, and that’s where this isn’t as successful.

Essentially an extension of the John Wick revenge template, with an abused mutants narrative absorbed from the X-Men universe, it just feels too slight, and never enough to validate the two-hour runtime. You feel large chunks of the film have been jettisoned in favour of extended comedic set pieces, such as a torturous one in which Deadpool regenerates. This means that while Eddie Marsan is prominent, he barely gets a word to say, and you never get to know who Cable is until the final few beats, because up until then he’s been a largely unremarkable comicbook bad guy.

However, a desire for orchestrated bedlam does mean that there are plenty of likeable additions to the cast, plus some wonderful cameos, which will go unspoiled here. Zazie Beetz brings a very funny laissez-faire attitude that compliments the Deadpool vibe, as luck magnet Domino, and while there’s a missed opportunity in the fact that they never make a Ricky Baker gag, Julian Dennison is exactly what you’d expect from the Hunt for the Wilderpeople breakout star. It’s also worth noting that Deadpool 2 breathes new life into the mid-credit sting by featuring the best use of the omnipresent tease technique since 22 Jump Street.

Stylistically Leitch ensures that the film earns its R-rating, particularly during the opening montage, but you might expect a little bit more in terms of visual panache from the director who made that stunning Atomic Blonde action set-piece, or turned John Wick into GTA writ-large.

It’s not the reinvention of the wheel that the first film was, just a looser, faster spin of it. Deadpool 2 is hyperactive fun, with an irrepressible Reynolds knowingly hogging the entire film, but next time we’d just like the moments in-between the jokes to be filled with something a bit more substantial.