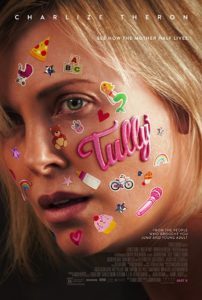 Thirty something Marlo is happily married to Drew.  To the outside world, they have the lot – a nice home, two children – and now there’s baby number three.  The new arrival turns Marlo’s life into a nightmare of breastfeeding, expressing milk, changing nappies and very little sleep.  She’s reluctant to take up her brother’s idea of a night nanny to make her life easier but, when she reaches breaking point, she decides to give it a go.  Through the door walks Tully – young, free-spirited and just the change the family needs. 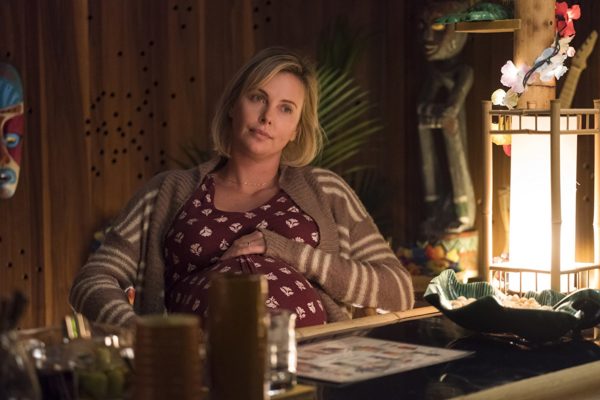 Mary Poppins doesn’t make a return visit to UK cinemas until just before Christmas so, before she comes along, meet the 2018 version.  Tully.  The night nanny who appears from nowhere on Marlo’s (Charlize Theron) doorstep out of nowhere and, once her job is over, disappears just as suddenly. And, just like La Poppins, she’s the answer to a prayer.

Marlo’s marriage to Drew (Ron Livingston) is happy enough, but plodding.  They already have two children, a boy who’s struggling at school as well as an older girl, and at the start of the film a third is on the way.  The new arrival, a little girl, brings new pressures by the nappy disposal unit-load.  A day in, day out routine of feeds, expressing milk and minimal sleep and, seeing her exhaustion, Marlo’s brother, Craig (Mark Duplass) suggests she hire a night nanny to ease the load.  She resists initially but relents when she nearly snaps at one of the children and Tully (Mackenzie Davis) arrives. 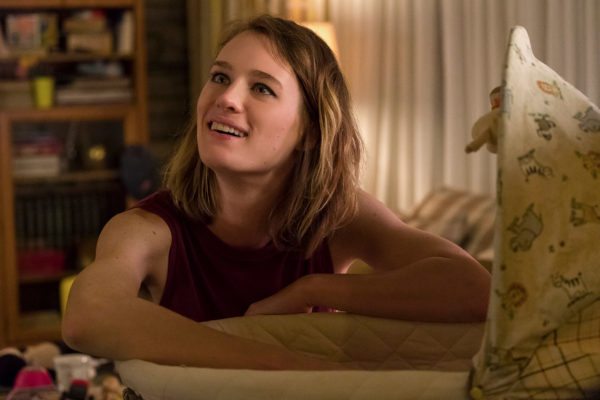 If you’ve ever been in a long-term relationship, Tully will strike a chord.  If you’ve had children, it’ll ring a very loud bell.  In fact, it’s hard to imagine that the film won’t hit the spot somewhere along the line for just about anybody watching it.  It’s a beautifully observed domestic comedy drama – the laughs are gentle and affectionate, sometimes cheeky, never raucous – and Diablo Cody’s screenplay is wonderfully authentic, drawing on her own experience as a mother, from the joys of disposable nappies to not springing back into shape afterwards.  And Theron lives up to the demands of the script and the role, gaining some 50lbs thanks to heavy-duty snacking to show what having a baby – let alone three! – does to a woman’s body.  She’s flabby and floppy and even her older daughter is shocked at her appearance.

Tully, with her confidence and encyclopaedic knowledge of life and everything else, seems almost seems too good to be true.  Or real.  That’s for you to decide.  But, while you’re doing that, you’re also wondering where the turning point in the story is going to come. It arrives eventually and it’s not quite what you would expect.  What also becomes transparently clear is that she’s not just there to help Marlo, but the whole family, in different ways.  By the time she’s gone, she’s brought the family back to together and shown them that the ordinariness of family life, the routine, the challenges and the irritations are something to be cherished and valued. 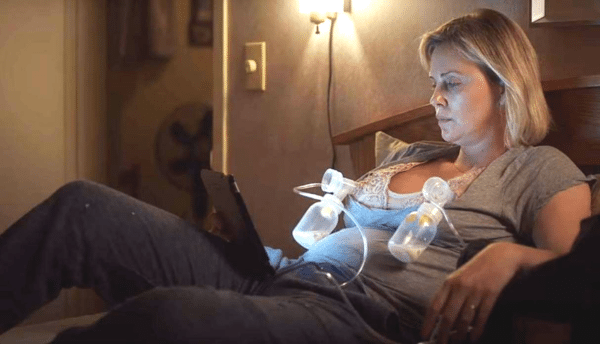 Director Reitman gets uniformly great performances from his cast.  It’s a real turnaround of a role for Theron after the kick-ass Atomic Blonde.  She progresses from being heavily pregnant to a less-than-taut third time round mother in a superbly judged performance as somebody who’s perhaps not the most natural of mothers but who tries her best and certainly has a bond with her children.  She doesn’t always get it right and she’s isn’t always given the support she needs from her likeable but hopeless husband, who is all too aware he’s falling down on the job. Mackenzie Davis (last seen on the big screen in Blade Runner 2049) shines in an equally different role and slowly unfolds before our eyes as Tully.  She’s great with the baby, but it becomes apparent she’s not as sorted as she makes out.  In fact, she’s just as dissatisfied with her life as Marlo is with hers.

An ode to family life, Tully isn’t in the mould of The Waltons: it treads a more realistic path, with all its downsides and messiness but also its strengths.  Deliciously observed and written, it’s heartfelt and irresistible.  And, for those who’ve already seen a certain superhero movie or those that don’t want to, the perfect antidote.