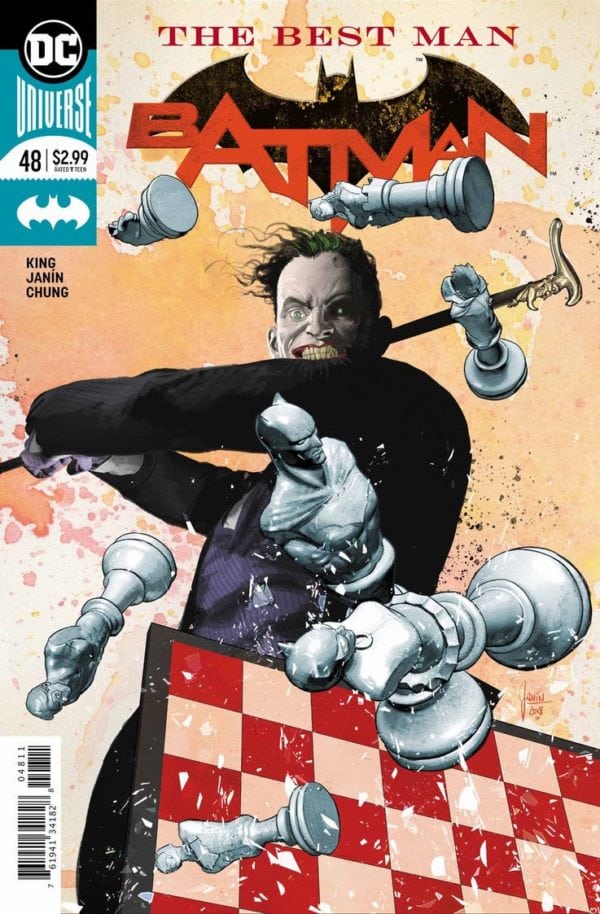 The big wedding is coming up very fast and while plenty of fans are excited for Batman and Catwoman’s nuptials, there is one character who seems both excited and angry at their union: The Joker. Tom King writes a small story where Joker tries to gain Batman’s attention in a fairly despicable manner designed to rattle his cage in a rather compelling way. Batman #48 does a good job at highlighting Batman and Joker’s unique relationship and just how sadistic the Clown Prince can be.

This issue marks the first time King has used Joker in the present after writing a flashback story in The War of Jokes and Riddles. In that story, Joker was very subdued after finding no reason to laugh and hardly smiling until the very final issue. Here, however, King writes a much more traditional and maniacal Joker who smiles and is very eccentric throughout the whole issue. Despite the eccentricity, Joker is very sadistic as he slaughters a wedding just to draw Batman’s attention, yet can’t even control himself from killing hostages. It definitely marks one of Joker’s most evil acts, and that’s saying something after some of the things he did in War of Jokes and Riddles and other acts in the Batman continuity.

Its also interesting that the majority of the dialogue comes from Joker as he makes repeated threats and goes on multiple rants. Its one of the few criticisms about this issue as Batman acts very passively. He does get a couple good moments, particularly whenever he pummels Joker, but he seems to go along fairly easily with Joker’s demands to listen to and even ‘pray’ with him. There’s not the usual back and forth banter between them where they fight over their opposing viewpoints, though that is likely to come in the next issues leading up to the wedding. King’s point is to show the strange relationship these two enemies have, but even still Batman’s passivity is weird considering he’s surrounded by dead wedding guests.

Mikel Janin’s art shines here as he finally gets to depict a smiling and gleeful Joker. From maniacal laughter to confusion to seeming sorrow, Janin takes Joker through a fairly wide range of emotions and shows them very well. June Chung’s colours compliment Janin’s pencils, bringing a vibrant look to the issue and making Joker’s purple tuxedo and red smile really stand out. The church setting also looks great with its gothic architecture giving a subtle foreboding as well as Janin and Chung’s dark shadows in some areas of the church.

King utilizes The Joker very well in Batman #48 as he displays Joker’s sadism in a horrific and terrifying way while also highlighting his eccentricity. Batman could have done a bit more than just scowl and remain passive, though, but his role is largely the only big criticism of the issue. Janin and Chung’s artwork is great throughout with both Joker and the church stealing the show. The team definitely sets up the wedding and Joker’s crashing of it nicely.