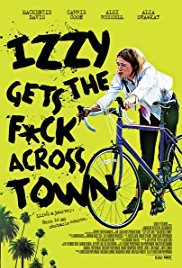 A woman at rock bottom must find her way across Los Angeles in order to crash her ex-boyfriend’s engagement party.

One character sums Izzy Gets the F*ck Across Town up best by telling the titular mess of a woman (made apparent straight from the beginning waking up with a red substance all over her catering outfit that could possibly be blood, wine or a mixture of both that she wears throughout the entirety of the movie) that no one is rooting for her cause, which is to selfishly travel across a part of Los Angeles to the wedding reception of her former best friend in an effort to break things off as she is still in love with the groom. Writer and director Christian Papierniak (a shorts filmmaker also credited with directing several entries in the NBA 2K video game franchise) gives Izzy, and by extension the audience, signs that this is her destiny (a specific postcard she notices after waking up from a night of drunken tomfoolery and apparently consensual sex with a stranger), but it never registers as enough to get us behind the rebellious, cigarette smoking punk rocker as her very motive is downright unlikable.

Mackenzie Davis (most known for impressing on the television series Halt and Catch Fire, also recently seen in Blade Runner 2049 and cast in the next entry of the Terminator saga) is serviceable in the role, delivering a performance that sells the urgency of the situation and how important this guy is to her life, but what Izzy Gets the F*ck Across Town really functions as is a race against time without any context as to why viewers should invest in the anticipation of the wedding inevitably turning into a disaster. Also, quickly presenting numerous characters at the reception as more unlikable than Izzy is a cheap way out just as much as splicing dream sequences into the experience encouraging her to go through with her plan. 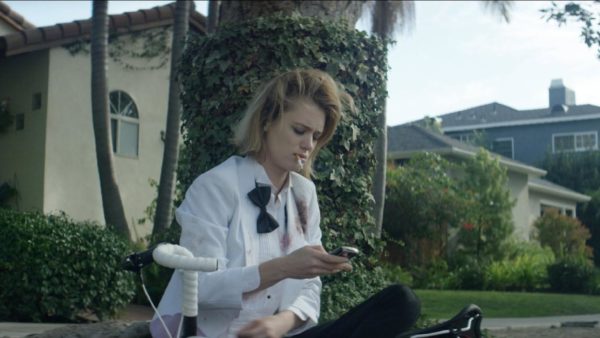 As far as the direction goes, Papierniak clearly wants the film to resemble a punk rock album, and not just because the soundtrack is littered with songs of that genre. Izzy Gets the F*ck Across Town is actually broken up into chapters, but what they really feel like are individual stories within an overarching narrative, similar to a concept album that tells an entire story across all of its tunes. And although these proceedings definitely have the appropriate energy to them, too many of the interactions act as superfluous filler. This would probably be more forgiving if the scenes were funny as intended or not boring when they’re attempting to be poignant, so instead the most fun to be had is seeing which actor is next to pop up in a cameo role.

With that said, the film has attracted quite the intriguing cast involving recent revelations such as Lakeith Stanfield, former child actor icons such as Haley Joel Osment, and even veterans like Carrie Coon playing Izzy’s sister. The siblings were once closer together and part of a band, but have since drifted off with Virginia becoming somewhat of a snobby and more entitled person, abandoning her roots. All of this makes for the best moment in the movie as they perform a banging duet that reveals a layer of depth to the sisters, and more importantly, tips us off as to what Izzy really wants, even though she might not be aware of it just yet. While the above segment is where the film finds its groove and morphs into something rather entertaining, the ending somehow left me liking Izzy even less, but admittedly in a complex fashion to be admired. Still, it is impossible to shake the feeling that for an 86 minute film, Izzy Gets the F*ck Across Town has more dead air than jolts of electricity. However, for punk rock aficionados that love ballads about throwing caution to the wind, disregarding every piece of advice given, all to win back the heart of a previous flame, this might be to their liking as that is the extent of the film’s depth. Props also have to be given to for being unique, but the execution is off.