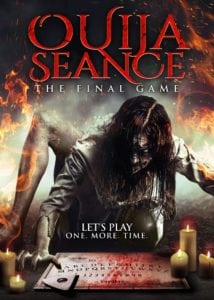 Sarah and her friends decide to spend the weekend at an old villa Sarah mysteriously inherited. After finding a Ouija Board in the attic, Sarah and her friends unknowingly awaken an evil force connected to the villa’s hidden secrets. To fight the unimaginable horror, they will have to face their darkest fears and worst nightmares.

There’s something really gleeful about old-school, schlocky horror movies like the Leprochaun franchise or the gazillion Friday the Thirteenth / Jason sequels. Their mix of bad effects, poor acting, and mindless terror make them a blast to watch, even if they’re objectively shite. Unfortunately, as of late there have been fewer and fewer so-bad-they’re-good horror movies hitting VoD or Netflix, with most attempts simply being bad (see the Bye-Bye Man). So, when Ouija Seance: The Final Game got announced with its sequel-esque title and its Ringu-meets-the-Exorcist front cover, I was excited. This was going to be 80 minutes of non-stop horror tropes, silly incarnation passages, and a boatload of bad decisions (on the part of both me and the characters). What I got was a boatload of bad decisions… on the part of the screenwriters.

The movie follows about 50% of the characters from the video game Until Dawn: the ex-boyfriend, the jock, the, err, promiscuous one, and the Good Guy, as they decide to spend a few days in a creepy old house. Unlike Until Dawn, which was full of great actors and had a healthy dose of irony, Ouija Seance does nothing to flesh out these characters beyond their basic traits. Even the Good Guy, who happens to be a woman, is just an average Jane with about as much character as a Water Biscuit.

But hey, I didn’t watch this film to feel things about people; I watched this film to laugh as human meat bags got possessed or scoffed or mutilated or whatever by some putrid abomination. Regrettably, the film didn’t include any of that either.

Ouija Seance attempts to scare the audience in one of two ways: by playing loud noises, and by showing shadows moving across the backdrop of scenes, accompanied by loud noises. That’s pretty much it. Despite Ouija Seance’s title, I can only think of two or three scenes in which something vaguely paranormal happens. The actual entity that should have been the crux of the film only ever appears in shadow, which is not necessarily a bad thing, but moves like Morph from SMart. Funny, I guess, but not in the way I’d hoped.

To call this movie a cookie-cutter film would do a disservice to cookie-cutter films, and would also take me well over my recommended daily limit of biscuit analogies. At least cookie-cutter films have content to speak of, generic as it may be. Ouija Seance simply doesn’t. And for that reason, I’m not going to waste any more time on it.