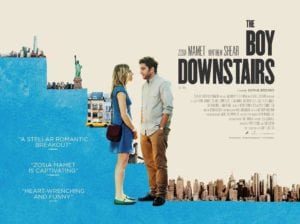 Several years ago, aspiring writer Diana met Ben, they fell in love and she broke up with him when she went to London.  Now back in New York, she moves into a new apartment, only to discover that he lives in the one in the basement.  And she starts to reflect on whether there’s any future for their relationship. 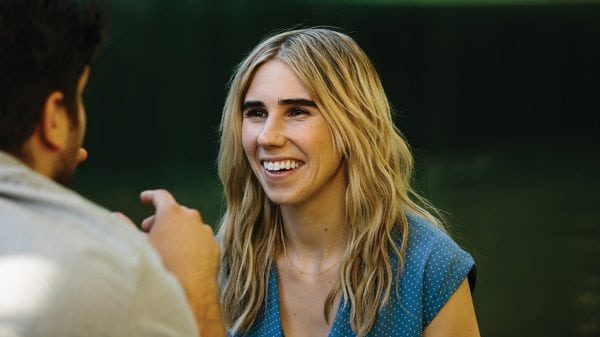 At first sight, this is a title with Nora Ephron’s name written all over it – except that she has nothing to do with it.  More’s the pity, because a little of her sparkle wouldn’t have gone amiss in The Boy Downstairs.

This is an indie rom-com, which is a bit short on both rom and com.  It’s a love story where one of them describes their relationship as a friendship.  Hardly ablaze with passion, then.  As for comedy, it has some very smartly observed sequences, where the humour comes totally from the characters and where the laughs flow easily.  But otherwise you smile gently and that’s about it. 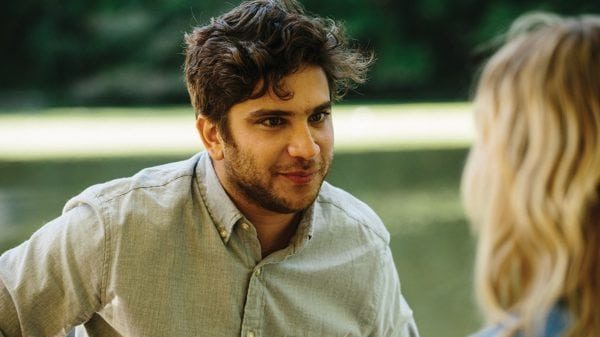 In a New York that has shades of Woody Allen about it, Diana (Zosia Mamet) is an aspiring writer with a day job in a wedding dress shop.  She’s just moved into a swish new apartment (that shop pays well, clearly!) and discovers a face from her past lives in the basement flat.  It’s her ex Ben (Matthew Shear), who she fell in love with several years ago and then ended the relationship because she was going to live in London.  Now she wonders if there’s any future for them at all, either as friends – which he admits he can’t do – or as something more.

So, with the course of true love never running smoothly, it’s a relationship with plenty of pitfalls, especially when he starts dating somebody else.  The film’s big stand out is Mamet as Diana, who has the quirkiness you’d expect in an indie movie coupled with a rather good line in understated, throwaway one liners.  But there’s also the vulnerability, the confusion, the lack of confidence and it all adds up to a well-rounded, believable young woman who finds the whole idea of being in love horribly scary – even though she loves Ben to bits.  Where it starts to unravel slightly is that the relationship between Diana and Ben doesn’t always convince.  Initially the reason appears to be that it’s unequal – it’s her that describes it as a friendship, so maybe that’s why – but actually it’s more to do with the two leads.  Mamet is so good is that she overshadows co-star Matthew Shear and that gives the film a much bigger problem, because it hinges on them being an endearing couple. Perhaps it would be more accurate to call this a romantic dramedy, despite the occasional dull patch.  What comedy there is happens in two scenes and one running gag.  Both of the scenes involve the couple – one sees them eating in a restaurant and coping with an arrogant Italian waiter (lemons will never be the same again!) and the other having dinner at his parents.  The older couple are funny and adorable and we could have done with seeing more of them, but this one sequence is all we get.  The running gag involves Ben’s subsequent girlfriend and Diana turning up at the wrong time – again and again.

It’s Sophie Brooks’ feature film debut as both director and writer and it looks like a first effort.  Not a bad one, but a first effort nonetheless.  There’s lots of promise in here, but much of it – especially in the humour stakes – just fizzles out and comes to naught.  The tone is uneven sometimes and, while it has charm, is sweet and inoffensive, there’s a sense that it’s trying too hard to please.  It’s very slight and would probably be more at home on the smaller screen, so it’s just as well it’s also available on digital.