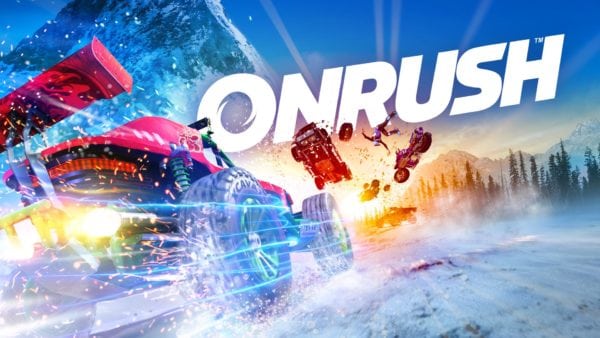 With the PS4 suffering through a dearth of quality racing titles for casual gamers, Onrush really couldn’t arrive at a better time. Developed largely by ex-Evolution Studios (Motorstorm, Driveclub) employees, this nifty new car combat offering combines the scuzzy energy of their former title and the neat polish of the latter to deliver an expectation-defying effort with cult fandom written all over it.

Onrush can only scarcely be called a racing game in the traditional sense, because it’s one of the few to not even feature a finish line in any of its four gameplay modes. Rather, the suite of team-based, 12-player match-ups focus on the player’s ability to maintain speed while manipulating treacherous, dizzying terrain, making judicious use of boosts, annihilating Titanfall-esque AI vehicles known as “fodder” and disabling as many of the human opposing team as possible.

For instance, Countdown mode is all about racing through gates which add time to your team’s ticking clock; the first team to reach zero loses. Lockdown meanwhile sees teams vying for control of a moving zone, Switch involves respawning with a stronger class of vehicle each time you’re totalled, and my personal favourite, Overdrive, is a pure, frenetic sprint, where players earn points by boosting for as long as possible.

What perhaps impressed me most about Onrush is the deceptive amount of strategy involved in a game that could so easily have just been a mindless destruction-fest. Knowing when to activate the special “rush” boost can mean the difference between winning a round of Overdrive or not; deploy it when your team’s already about to win a round and you’ve basically wasted it, while it can be a marvellous tool to snatch a victory from the jaws of defeat. 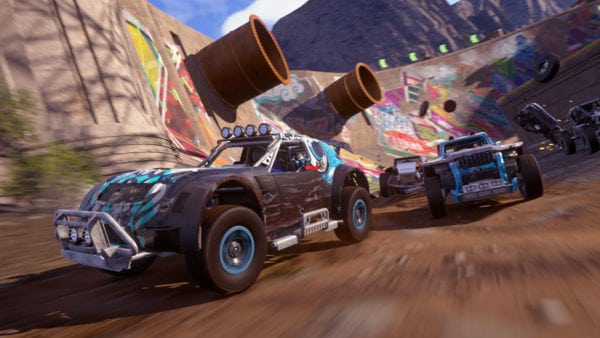 Similarly, knowing when to interact with your rivals and when to leave them be is crucial; time things wrong and you’ll end up wrecked, but to the same token, Lockdown and Switch in particular invite a more aggressive style of play where physical dominance of the enemy is key.

Mercifully, all four of these modes are a joy to play, and not a single one of them is remotely groan-worthy or even a mild chore to get through. While the game is clearly focused on online multiplayer – which is decidedly slicker and more responsive than the divisive recent open beta, by the way – it does feature a sizeable single-player component also,

A career mode of sorts that basically doubles as a tutorial, the offline offering is great for getting a lay of the land. Though it does end up feeling a bit repetitious after a while, the central loop is nevertheless insanely addictive, and the AI solid enough that it’s quite a fine substitute for battling real people (especially important in case the game’s player-base starts to dwindle).

The online mayhem is the meat and potatoes, though, and it’s incredibly easy to quickly rinse hours and hours playing this game. The “just one more” appeal is strong, which is all the more impressive considering the fairly limited number of modes. Granted, a dozen maps with decent diversity among them, the varied vehicle types at your disposal – bikes, buggies and trucks complete with their own Overwatch-inspired quirks and abilities – and the loony pick-ups littered around the map keep things pretty interesting regardless.

Technically, the game is a rock solid looker albeit not a stunner by any means. The vehicular textures and environments are appealing, and go hand in hand with performance that maintains a sturdy frame-rate (ever important in a game like this). The visuals won’t win any awards, but they palpably convey a real sense of speed, the track design itself is remarkable, and the general aesthetic is distinctive enough without ever being too loud or ostentatious just for the sake of it. 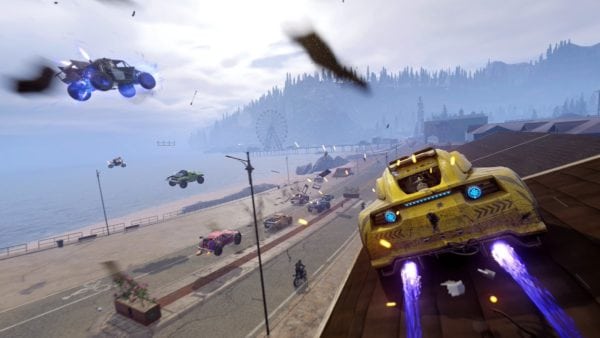 Aurally, things might prove a little more divisive. The musical selections skew towards stereotypically younger tastes – especially dubstep – but they’re typically benign enough that most should be able to tune them out if they so wish, while the smattering of spoken dialogue is sometimes a little on the wonky side. The moment-to-moment sound effects, though, are crunchy and punchy enough to effortlessly satisfy.

There are definitely minor gripes elsewhere; you frustratingly have to wait almost 15 seconds to respawn after being totalled with no option to skip the killcam, and there also desperately needs to be a prompt to skip the post-game wall-to-wall stat screens. The main obstacle for many, however, will be justifying the AAA price tag, given that in spite of the game’s many strengths, it’s ultimately rather low on substantial content. DLC could certainly remedy this, but that’s a big maybe for now.

It’s easy to imagine an alternate reality where Onrush launched for a mid-range price tag, yet with its current asking price, it’s possible that the game will struggle to maintain a populous player-base (at least until it goes on sale).

That’s certainly not a recommendation to wait for a sale if you’re a lover of Evolution’s previous games – because there’s certainly a ton of value here if the gameplay loop truly clicks with you – but simply to be mindful of what you’re getting. In Codemasters’ defence, the game features no micro-transactions at all, and though loot boxes are present, they can only unlock cosmetic items.

In terms of what matters most, Onrush is one of the more intriguing (non)racers to come down the pike in quite some time; a slick, lightning-paced breath of fresh air for those who find Gran Turismo and Forza Motorsport drier than sawdust. After all, where else can you fly your truck through the air, surf somebody else’s car all the way to the ground and then crush them into a pancake? 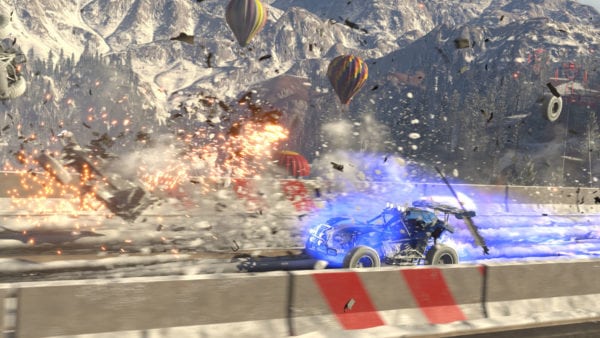 Cons:
– Light on content for the price.
– Overlong respawns and post-game menus.
– Music will divide players.

Reviewed on PS4 (also available on Xbox One).