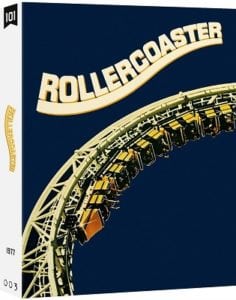 A bomber threatens to blow up rollercoasters in various amusement parks unless his ransom demands are met.

Riding the crest of a wave of disaster movies in the late 1970s, Rollercoaster centres around the premise of a bomber setting off explosives on theme park rollercoasters, which marked a move away from the natural disasters of movies like Earthquake that were popular at the time. What also marks Rollercoaster out as a different kind of thriller is that the actual event of blowing up a rollercoaster is shown and done with in the first 15 minutes of the film, during which only a few conversational words are muttered by some of the staff of the amusement park but nothing else. It’s a bold move as you don’t get to see any more rides getting blown up for the rest of the movie and, let’s be honest, that is what we are paying our money to see so what else does Rollercoaster have to offer for its remaining 103 minutes?

Well, what it has is a game of cat-and-mouse between the bomber (credited as ‘Young Man’ and played by Timothy Bottoms) and safety inspector Harry Calder (George Segal – Who’s Afraid of Virginia Woolf?) as the bomber demands a ransom of $1 million (c’mon – it was the ‘70s) or another rollercoaster in any number of amusement parks will get blown up as innocent patrons enjoy a day out. Harry has to join forces – or bang heads – with hardened FBI Agent Hoyt (Richard Widmark – To the Devil a Daughter) and local police chief Keefer (Harry Guardino – Dirty Harry) to try and work out where the bomber is going to strike and how they can prevent it, and all the while the bomber seems to be one step ahead of Hoyt’s prevention methods, which is about the only clue you get into the bomber’s psyche as there seems to be no real motive for why he is doing what he is doing. There was apparently a whole backstory for the bomber that explained his motives but that got cut in favour of keeping him mysterious, and it works extremely well as he gets to interact with Harry – of whom we get to know a hell of a lot about his personal life and just what type of guy he is – over a radio and we get enough of who he may be just by what he reveals in dialogue (and the fact he is a crack shot on the shooting games at the fair, and this is only two years after the end of the Vietnam War). Harry himself is a great character, the grizzled and cynical safety inspector who hates his superiors (played by acting legend Henry Fonda in a quirky cameo), has an ex-wife with a new partner and a teenage daughter (played by a 14 year-old Helen Hunt) and girlfriend who seem to be getting fed up being pushed to one side because of his job, and George Segal is brilliant in making Harry so endearing, especially in his heated exchanges with Fonda and with Richard Widmark, who seems to be playing the same stern authoritarian he played in most of his roles but he fits the tone of the film perfectly. Also, keep an eye out for early appearances from Craig Wasson (A Nightmare on Elm Street 3: Dream Warriors) and an uncredited Steve Guttenberg (Police Academy) along with a very 1970s (but pretty cool) mid-film music performance by rock band Sparks, who happen to be appearing live at one of the amusement parks.

Coming with an audio commentary from genre writers Allan Bryce and David Flint, a short but informative documentary about ‘70s disaster movies, an interview with author Tommy Cook whose original story inspired the movie, two cuts of the movie (US Theatrical and German Uncut) and a booklet with writings on the movie by Allan Bryce and Scott Harrison, this is as complete a package as you could want for a film that often gets overlooked but it really shouldn’t as it does contain all the elements of a classic thriller – suspense, action, great cast (say what you like about ‘70s disaster movies but they always had superb casts) and a fairly original premise – and thanks to the excellent performances and witty script the pace never really dips despite the film being nearly two hours long. Picture quality is superb with vibrant colours and incredible detail which doesn’t always help when it comes to spotting the mannequins in the rollercoaster cars when the bombs go off but the quick edits and tension of the moment means it isn’t really a problem, and audio-wise you don’t quite get the faithful recreation of the Sensurround experience from the cinema but the booms and crashes when the action kicks off are as punchy as they need to be and Lalo Schifrin’s eclectic score, that veers from ‘70s funk to smooth jazz effortlessly, captures the twists and turns that the film takes perfectly. As part of 101 Films Black Label imprint of cult movies Rollercoaster is a fantastic release, looking good and full of juicy extras, and the film itself is, for a genre that was often bogged down with heavy dramatics and dour tones, surprisingly fun and very rewatchable. It does feel a bit like a TV movie in places but otherwise Rollercoaster holds up extremely well and you’ll do well to be quick in picking it up as it is limited to only 3000 copies. Good luck.