A teenager tries to survive the last week of her disastrous eighth-grade year before leaving to start high school. I may have never been a socially awkward eighth-grade girl, I may not know what the hell “Gucci” means, and I’m clearly not the target audience for comedian Bo Burnham’s writing and directorial debut Eighth Grade, but that didn’t stop its authenticity and charm from working wonders on me. As a quick warning, if the details appear fuzzy in this review, it is because I’m just now getting around to reviewing it the week before release after watching it a few months ago at the Chicago Critics Film Festival (it was the closing night film and I was broken down from reviewing movies the entire week, some of which aren’t even published yet).

Moving on, the film simply doesn’t work without the incredible live-action debut performance from Elsie Fisher as the shy and timid Kayla. Only having done some voice work for the Despicable Me franchise so far, she is in every sense of the word a revelation in this role and worthy of winning the Best Actress Academy Award. Her facial expressions and body language ranging from opening up capsules of objects related to her interests in sixth grade, her inability to appear as if she fits in the crowd, and the self-confidence YouTube tutorials she puts out on the Internet are all adorably dorky. She also develops the urge to explore her sexuality in hopes of attracting the attention of a boy she is crushing on who, unfortunately, is only interested back because she, under a facade, expresses comfortably sending lewd pictures, also leads to the greatest sexual moment with food since THAT scene in American Pie. If that wasn’t enough, there’s also one of the most sweaty-palm inducing moments in recent years involving a high school senior weaseling his way into driving Kayla back home after a fun trip at the mall with the friend she does make on a high school field trip. Said mall adventure also features single dad (Josh Hamilton) hilariously spying on the group with good intentions hoping his daughter is safe and enjoying herself before he’s noticed and scolded out of the damn building an appropriately angsty teenage fashion. More importantly, the youthful hormones and all around creepy side of this chaperoning older teenager kick in, making small talk about Kayla’s virginity until before you know it he’s pressuring her to take her shirt off. Now, I’m not going to spoil the outcome of the scene, but it needs to be brought up because the historic Music Box theater where this was screened has a rather large room, but no joke, you could probably hear a kernel of popcorn fall on the floor it got so dead silent. All anyone in that screening wanted at that moment was for Kayla to make it out of the situation unharmed, both physically and mentally. Honestly, as someone who sees roughly 300 movies a year, that scene likely reigns supreme over anything in most horror or thriller films.

Continuing along talking about the scene, an actual eighth grader in the audience actually questioned Bo Burnham about the scene, prompting the filmmaker to invite him onstage and have a serious chat with the child about predatory behavior and how men should conduct themselves better. And that’s the thing, Eighth Grade is absolute vital viewing for both anyone in the age range and parents as well. This isn’t a movie about school that feels fake and manufactured; Elsie Fisher was actually granted a great deal of freedom in her lines, and it shows. That doesn’t just go for all of the social awkwardness either, as there’s a bit where she bonds with a new friend over Rick and Morty that feels genuine. Also, there’s a climactic speech from her father at the end that instantly brought back memories of the wisdom from Michael Stuhlbarg in last year’s amazing Call Me by Your Name. 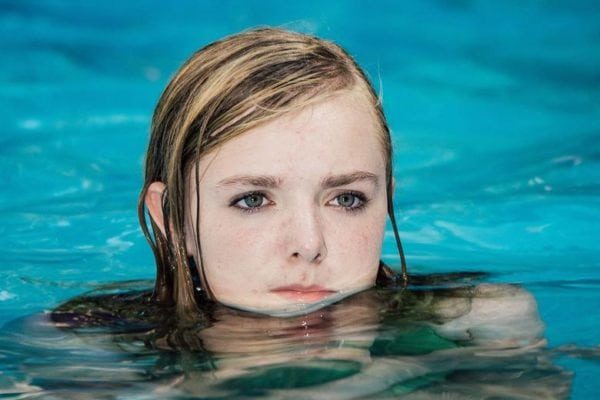 The only gripe there is to be had with Eighth Grade is extremely minor, but the structure can feel a series of sketches as it drops certain subplots instantly after briefly exploring them. However, that sort of freewheeling disjointed presentation also perfectly fits in with the stomach-dropping anxiety of one’s last week in junior high. She’s lost and searching for herself, as we all probably are going into high school. You don’t have to be in eighth grade to relate to the material, as the concept is enough to make a connection with. After all, we were all eighth graders at one point, and many of us were probably just as socially awkward as Elsie. Dammit, I see myself in her performance, especially within the shyness and inability to start conversations without feeling like I’m probably saying something pointless or stupid.

Eighth Grade is the best movie of 2018 so far, no question about it. Elsie Fisher better at least receive an Oscar nomination. Everyone needs to go watch this movie. Let’s all hope Kayla becomes a character Bo Burnham revisits at different points of her education similar to Richard Linklater’s fascination with the passing of time. Now if you’ll excuse me, I think I will go finally Google what Gucci means.