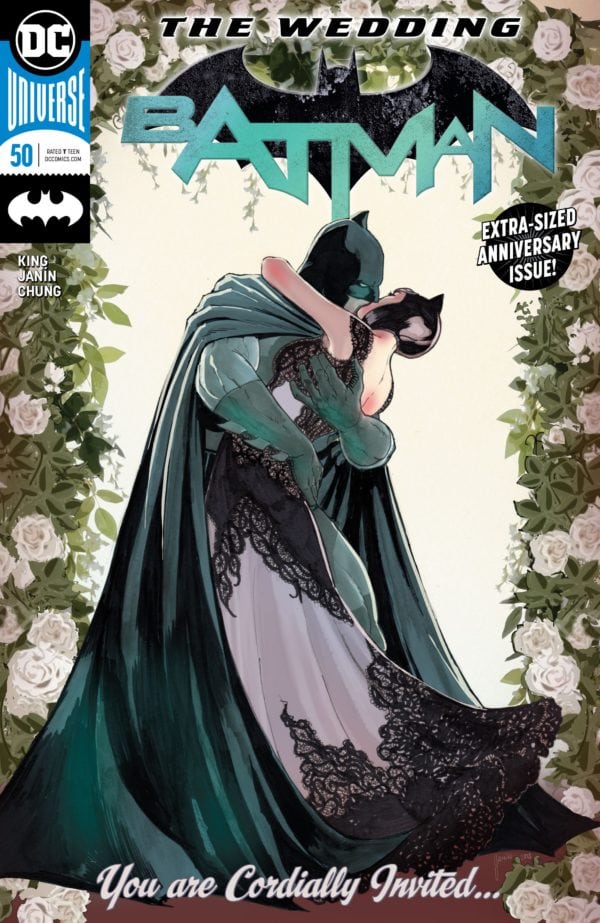 After building it up for a year, the big event is finally here as Batman and Catwoman prepare to get officially married. It’s been a long time coming, but, as we just saw in the recent issues, a lot of outside forces threaten to call if off. Will the Bat and the Cat get hitched?

Now it is impossible to talk about this issue without discussing the finer details, so there will be spoilers. If you haven’t read Batman #50 yet, check back once you’ve done so.

Tom King took an interesting approach to the issue as a whole. Rather than tell a streamlined story of Bruce and Selina preparing to share their vows, the big day was instead split into several parts throughout the double-sized issue with the majority of the story dedicated to splash pages from various artists of the pair throughout their lives. Not only that, but most of the script wasn’t even spoken dialogue, but dictated through two letters Bruce and Selina wrote to each other.

It certainly is an interesting framing device for such a momentous issue, but King manages to sell the emotion very well with how much these two characters care for each other. There are some great nods to their shared history, making references to the first time they met all the way back in Batman #1 (or Batman: Year One depending on Bruce or Selina’s perspective) and other adventures. King’s writing nails the emotion, especially with Catwoman’s letter as the wool starts being pulled back on the reader’s eyes with the realization she’s not going through with the wedding. Selina’s words weren’t the only things to sell the emotion though as there was also Bruce asking Alfred to be his witness (and essentially his best man) or Bruce and Selina’s reaction to seeing each other for the first time that day.

Where the issue fell a little flat was in the actual ending as Catwoman came to believe her marriage with Bruce would make him a lesser Batman. He’s always been a hero who has been more defined by the tragedy in his life, using that as fuel for his drive to combat crime and injustice. It’s been a big question throughout King’s run, particularly since the proposal in Batman #24, on whether or not Batman can still be Batman if he’s happy. It was a question that was ambiguously answered by Booster Gold recently when he told the pair that in the future “You were happy, but the world wasn’t” and even argued by Joker in the last issue when he told Selina Batman wouldn’t be able to stop him or anyone without that drive.

It’s not that the emotion wasn’t entirely there or Selina’s choice wasn’t believable (to a degree at least), but it was somewhat anti-climactic that there wasn’t anything more to the ending. The moment itself felt rather abrupt and we don’t even get a good moment to focus on Bruce’s feelings in the aftermath. It also doesn’t seem entirely like Selina’s character to give into arguments about a vague future or Joker’s twisted perspective on Batman’s life. However, as the final page implies, there may be way more to her decision as King reveals a figure at play that has been planning this to weaken Batman.

That’s at least one of the great aspects of this issue: King ties together many elements in his run together, from the very beginning with I Am Gotham to The War of Jokes and Riddles and more. The implication that Bane and other villains have been somehow manipulating events to tear Batman and Catwoman apart is a very intriguing one. It shows again that he’s playing a long game and with another 50 issues at least to tell his story, it’s clearly not over yet.

Mikel Janin’s art in the main story of Bruce and Selina’s wedding day is great. He displays the emotion on all the characters very well, from Alfred wordlessly thanking and hugging Bruce to a nice double-page spread of Bruce and Selina seeing each other for the first time. June Chung’s colours really pop in this issue, making Selina’s dress or their sunrise venue some of the most vibrant images in the issue. A big factor, however, is letterer Clayton Cowles’ work in how he made Bruce and Selina’s individual letters stand out and unique from each other by splitting their ‘dialogue’ up among the images.

Of course, though, a big draw to the issue is the amount of talent they got to help out. Big names like Jim Lee, Greg Capullo, Tony Daniel, Tim Sale, Amanda Conner and several others all contributed to the various images of Batman and Catwoman together throughout their history. Even Frank Miller put in a page of the two together. Some of these are better than others, and perhaps some of these images could have been saved for the actual wedding day itself so the ending wouldn’t have been as abrupt, but it’s a great celebration of Batman and Catwoman’s relationship and many of the artists have some fun with their splash pages.

Batman #50 is an intriguing way to present a wedding issue, especially one that’s an ‘anniversary’ issue of a title. The emotion is solidly felt throughout the story and all the artists, from Janin to the various guests, gave great renditions of the couple. The ending is an abrupt one and more time could have been better spent on the day itself, but King gave a fairly solid issue with a very tantalizing hook for what comes next.