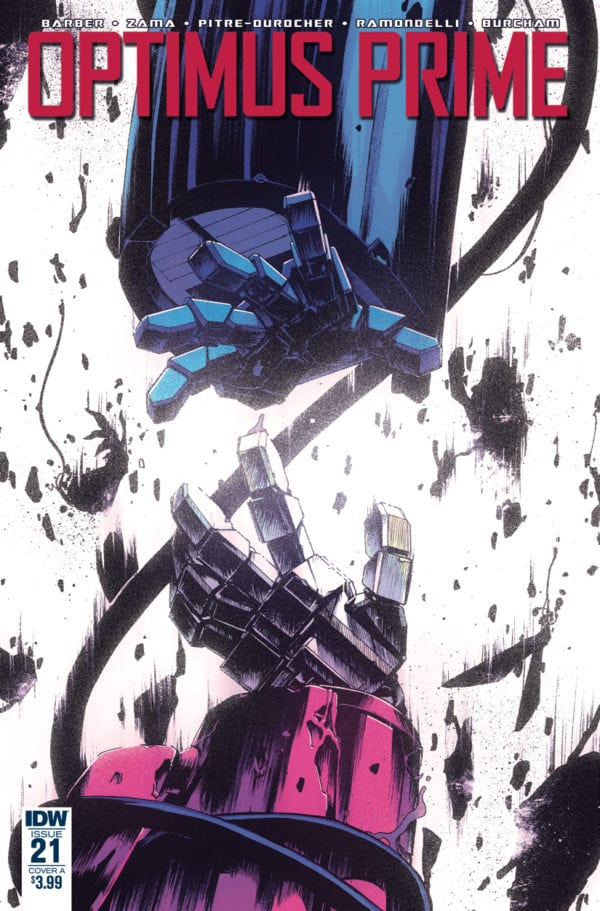 ‘The Falling’ finally concludes in Optimus Prime #21 as Optimus, Bumblebee and Pyra Magna put a stop to Shockwave’s plan, yet leave the door open for new threats as the series leads into Transformers: Unicron. John Barber subverts expectations though with what Shockwave’s ultimate goal in this phase was, showing his plan was more philosophical than what they originally thought. It’s an issue that features much more exposition for a finale, and some aspects are a bit confusing, but Optimus Prime #21 still shows how Shockwave has become one of the best villains in IDW’s continuity.

This time, the story’s narration is from Pyra’s perspective as she reflects on her disillusionment in the Primes, the Mistress of Flame and the whole religion her colony Caminus believed in. The tension between her and Optimus has steadily been on the rise since Pyra was first introduced and we’ve gotten some nice character work, such as the Transformers 2017 Annual, that has focused on their divide. Where Barber succeeds here is through the deconstruction of Pyra’s feelings towards Optimus and the Prime lineage and how she believes Optimus is abusing the belief people have in Primes as a religious figure. It’s some interesting work that expands on the tension between the two characters.

Her lack of belief in Optimus is what Shockwave aimed to achieve, though. It is revealed that this phase of his plan was really meant to demoralize Cybertron by revealing their entire history and belief structure came from him. Primes are apparently only special because he deemed it so when he travelled to the past on took on the identity of Onyx Prime. Barber makes it a fairly intriguing reveal that this was what he was after all along as he sought to show Cybertron how meaningless their belief and hope was. It certainly changes things from a typical take-over-the-world or another destroy Cybertron scheme. Another addition to this reveal is how he’s been planning his own move against Unicron’s arrival and this was merely the first stage of his counter attack.

Where the issue gets a tad confusing is how it portrays what happened to Optimus and Bumblebee as they come out of the limbo. It’s a little confusing on the first read that the pair have been turned into digital packets of information, with the Matrix seemingly destroyed in the process, and now reside in Pyra’s head. We know thanks to Transformers: Unicron both characters get physical bodies again, but it’s not entirely clear on the first reading that that’s what is happening to them. Likewise some of the action scenes are a tad confusing in how they are depicted.

The art is split between Kai Zama, Sara Pitre-Durocher and Livio Ramondelli. Each one has a distinct style that causes the issue to look a little inconsistent, though they mostly have their own scenes to focus on. Zama takes care of the scenes with Shockwave and Arcee, Ramondelli the limbo infraspace and Pitre-Durocher the final few pages with Starscream, Pyra and the lead-in to Unicron. They separate scenes help differentiate their work, but its still somewhat inconsistent and a bit jarring when going from one artist to the next. As said, some of the action scenes could have been clearer as it’s a bit difficult to tell how Arcee defeats Liege Maximo or Victarion kills Devastator.

Optimus Prime #21 is still a good issue, but some things could have been clearer both in the story and in the art. The focus on Pyra’s perspective was a nice examination of her character, especially since it revolves around a largely negative opinion on Optimus Prime. Shockwave is still a master manipulator and it will be interesting to see how the series plays into Unicron.