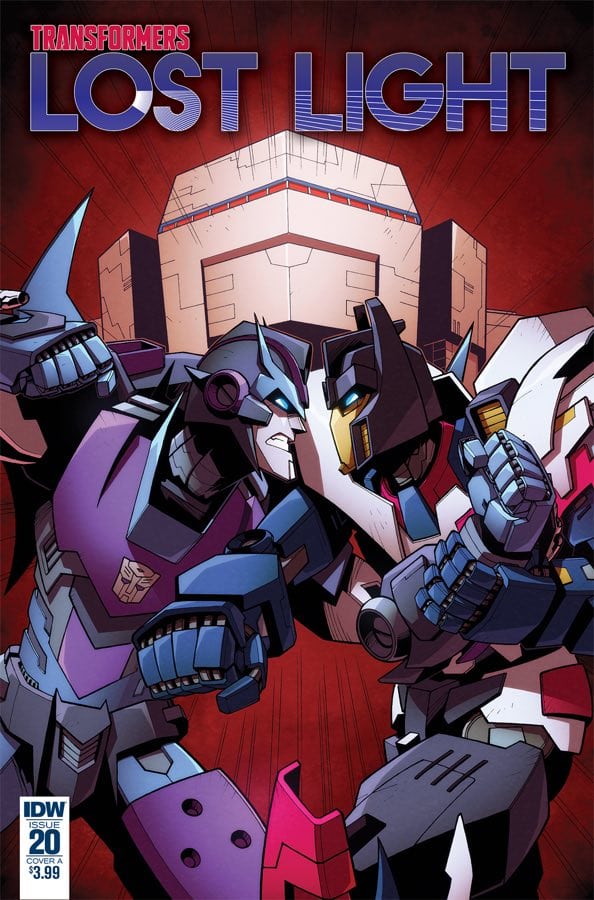 At long last, Rodimus finally gets what he wanted as he comes face-to-face with Getaway, the Autobot who left him and several members of the Lost Light crew for dead and stole his ship. Its been a long time coming especially since Getaway left them back when the title was still More Than Meets The Eye in its 50th issue. James Roberts doesn’t fail to deliver a good confrontation though and utilizes the supporting characters to help deliver a suspenseful conclusion to this story.

Picking up where the previous issue left off, the exiled Lost Light crew members are still fighting the mutineer Sparkeater crew while Rodimus and Cyclonus confront Getaway, Star Saber and Scorponok. Its good set up for this fight given all the history between these characters; I appreciate Roberts referencing Rodimus and Scorponok’s history from years ago in the Maximum Dinobots miniseries from way back in Simon Furman’s days. That’s not the only callback as Roberts once again makes some deep dives into the continuity to reference how far the characters have come or used it to plant another seed for the next story.

There is a fair bit going on in the issue as it bounces back and forth between the various groups, but the main event is the confrontation between Rodimus and Getaway. It’s a fairly lengthy encounter between the two as Getaway gloats over his apparent victory before Rodimus comes out on top. Roberts subverts expectations though as this isn’t a no-holding-back fight, but something much more subtle and quieter. Roberts also takes the opportunity to examine Rodimus and some of the choices he’s made in his desire for vengeance as Getaway does the typical ‘we’re not so different’ type of argument. Getaway’s own character is called into question as well though. He’s much less of the confident, ego-driven  bot who believes in a greater destiny for himself, but one broken by all of his dreams crumbling around him after realizing he’s sacrificed so much for nothing at all. It’s some very interesting character work and one that helps Rodimus snap out of his vengeful persona, literally burning away the anger he’s felt as he makes the morally right choice.

This time the art is done by Casey Collier and he makes several of the images standout. The fight scenes are all choreographed and flow very well with smooth transitions from panel to panel. Even when transformers are standing still, they’re detailed in their body language and facial expressions. Some of the most impactful visuals from the issue comes from a couple of the deaths, mostly for the graphicness. Of the two, Getaway’s is the one most painful, detailed and grisly of the two, yet is also somewhat satisfying and poetic given the things he did to his crew. Joanna Lafuente’s colours compliment Collier’s art and make those standout moments even better. The panel where Rodimus emerges his old self is one of the most triumphant moments from the series thanks to her colour work.

Transformers: Lost Light #20 is a great conclusion to Rodimus’ hunt for Getaway and the Lost Light. Roberts utilizes a lot of great character work which is helped even further by Collier and Lafuente’s art. While it is not the end of the series yet, the final issues definitely have a lot to live up to thanks to this one.