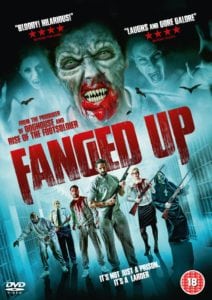 A young man is thrown in the cells for the weekend after a brawl, unaware that the guards are bloodsucking vampires. 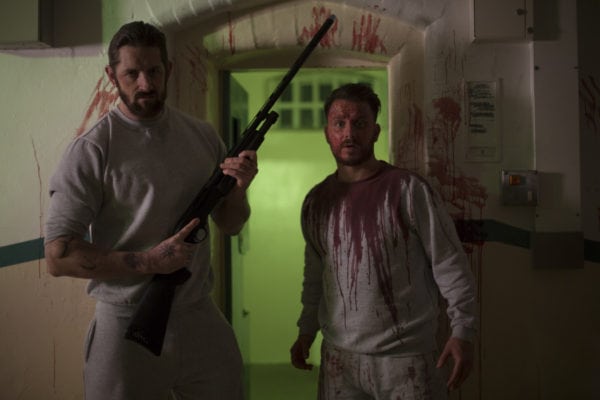 Nothing says British horror quite like a vampire movie and nothing is quite as difficult to get right as a horror comedy, seeing as there two genres you have to play to. Fanged Up is director Christian James’ follow-up to his 2013 popular zombie comedy Stalled and, like that movie, Fanged Up doesn’t want to reinvent the genre but just have a good time with it.

The tone is set straight away with roguish Jimmy Ragsdale (comedian Daniel O’Reilly) attempting to chat up a couple of women in a nightclub by telling them he is the owner. Unfortunately, the real owner – played by Rise of the Footsoldier’s Terry Stone – doesn’t take kindly to this and a brawl ensues, with Jimmy ending up in police custody. With no room at the police station Jimmy is transferred to Stokesville prison for the weekend but upon arrival it looks like he’ll be lucky to survive until then as the Gothic building appears to be run by vampires, led by Governor Payne (Steven Berkoff – The Krays) and fearsome head guard Ms. Renfield (Lauren Socha – Misfits), and Jimmy, along with fellow inmates Victor (Stu Bennett – Dead Man Down) and Shifty (Vas Blackwood – Lock, Stock & Two Smoking Barrels), must team up with new prison doctor Katie Makepeace (Danielle Harold – Eastenders) – who just happens to be his ex-girlfriend – to defeat the bloodsuckers and survive their nightmare. 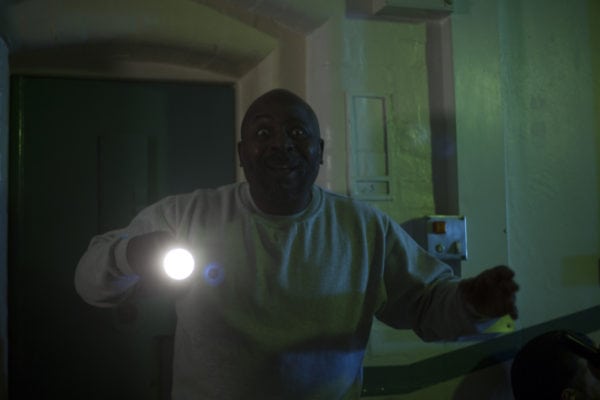 Despite the barrage of jokes that get thrown about – most of them sticking but some of them not – Fanged Up pays respectful homage to vampire movies of old, particularly ones from Hammer (how could it not?), Fright Night (Ragsdale – see?) and a few other notable ‘80s movies but never goes so far as to mock. The humour is quite broad and Daniel O’Reilly keeps the tone light, playing on his cheeky persona and constantly trying to get his end away (which does play into the final scenes of the movie in a way that isn’t obvious to begin with but you could see coming if you really tried), and although they beat a couple of jokes to death – the ‘Victor and his bear’ joke works once but not the handful of times they repeat it – there are quite a few belly laughs to be had. Despite Daniel O’Reilly being the comedian, the character of Jimmy isn’t all that likeable but luckily Vas Blackwood puts in the best performance playing gay prison fixer Shifty, forever cheerful despite the impending death that awaits the prisoners’ every move and probably the only character who is deserving of our affections, although the presence of Ewen MacIntosh (The Office) is always a welcome one, unlike Steven Berkoff who hams things up a notch too much, although his screen time is thankfully kept quite brief.

It goes without saying that Fanged Up isn’t going to bother the po-faced arthouse sensibilities of The Hunger or go down as a vampire classic like Fright Night, The Lost Boys or the other movies that it aspires to be bracketed with, although the look of the vampires and the bloody explosions that come with their demises gives more than a passing nod to From Dusk Till Dawn – albeit with a much smaller budget – and the mixture of gore and humour is pretty much bang on. A proper popcorn laugh-fest with heart, Fanged Up is hugely enjoyable late night entertainment as long as you’re not expecting anything more than a fun time without the need to think too hard about it, which is really the idea.