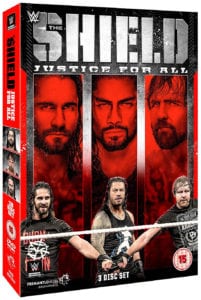 A look at the last three years in the careers of Roman Reigns, Seth Rollins and Dean Ambrose – as opponents, as singles competitors and as allies in the reunited incarnation of The Shield. 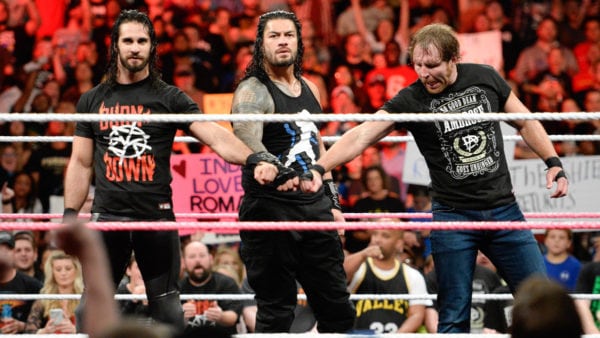 From the moment The Shield debuted at the tail end of 2012, it was obvious that Roman Reigns, Seth Rollins and Dean Ambrose were something very special indeed. The three men went their separate ways when Rollins betrayed the group in 2014 and, since then, their orbits have continually intersected, all the way up to an eventual reunion in 2017 that, had it not been for injury issues, could have been a hot story in the early part of this year. It’s this three-year run of intersection and singles excellence that is covered on Justice for All – WWE’s latest triple disc extravaganza.

The collection is split neatly across the three discs, with each focusing on a particular Shield member. Disc one is all about Ambrose and follows his midcard feuds with guys like The Miz and Kevin Owens, as well as his time as WWE Champion and his eventual reunion with Seth Rollins en route to a Tag Team Championship run. Disc two focuses on Rollins after his return from injury and deals with his pursuits of the world title, culminating in his triumphant Intercontinental Championship win at this year’s WrestleMania.

These two discs serve as fun rides through the careers of two of WWE’s brightest superstars. The Rollins disc, in particular, serves as a chronicle for a star who has finally managed to achieve the success as a singles babyface that always seemed likely during his Shield days. Free of the albatross around his neck that his pro-Authority heel character ultimately became, Rollins has spent the last few years becoming one of the most over heroes on the Raw brand, both as a result of his enjoyable promos and his electrifying in-ring work. This collection includes the zenith of this rise – his hour-plus iron man performance in a gauntlet match prior to the Elimination Chamber event. It’s a terrific television moment that is absolutely worth revisiting, if only as a reminder of how brilliant WWE TV can be when it dares to step outside of its formulaic comfort zone. 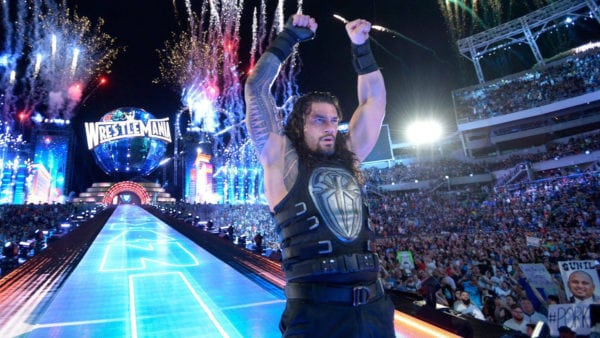 Perceptive readers will have noticed the elephant in the room at this stage of the review. In fact, it’s more of a ‘Big Dog’ in the room. While the Ambrose and Rollins discs show performers going from strength to strength and winning over the fans, the third disc focuses on Roman Reigns as he transforms from a terrific in-ring performer unfairly hated by the fans into the man involved in many of the most tedious wrestling matches plastered across WWE marquees in years. There was a time when a Roman Reigns pay-per-view match was a guaranteed spectacle, regardless of what you thought of him as a character, but that has fallen away in the last few years.

The Reigns disc really shows the Big Dog’s decline as a talent. One of its first segments sees Reigns share his delight about winning the WWE Championship from Sheamus, which is the moment at which it finally looked as if WWE might have found a way to make him work as a babyface champion. The next two matches see him take on Triple H and the Undertaker in two of the worst WrestleMania main events of all time. These matches aren’t as bad in isolation as they were at the end of five-hour marathon shows, but they do look like lacklustre slumps in the wake of the outstanding action on the other discs. By the time the viewer is asked to sit through the dispiriting finisher spam of Reigns vs. John Cena at No Mercy 2017, it’s very difficult not to just turn the thing off.

Justice for All is mostly a terrific depiction of everything that has made the three members of The Shield compelling as characters in professional wrestling over the last few years. There’s at least six hours of excellent content here, sewn together by interview segments that show just how much their current success means to these three young men. Despite the in-ring decline of Roman Reigns – once one of the company’s most reliable main event performers – there’s enough here to enjoy for The Shield to continue to deserve their position as top guys.