So far, Freeform’s Marvel series Cloak & Dagger has told a very grounded origin tale, but as we enter the second half of the first season, showrunner Joe Pokaski has told Syfy Wire that we can expect to see the “heat turned up”, as well as teasing the introduction of classic comic book villains.

“What the writers [and I] tried to do is really set up three acts of this particular season,” continued Pokaski. “The first four episodes were Act 1, where we really got to understand Tandy and Tyrone as individuals… We’re saving some of the more fantastical [villains]. I think we wanted to start off very grounded when we first started talking about this show, something that Marvel does really well, it has to be the world the way it is. That’s where we started, and as you’ll see, especially from episode seven on, we turn up the heat quite a bit.”

Pokaski also went on to reveal that viewers have already seen a tease for one specific Cloak & Dagger villain in Mister Jip:

“You didn’t see him in episode six? It’s possible you did. I’m not spoiling anything, I’m not committing to anything. But you should go back and look carefully at the scene where Tyrone goes into Kev’s dream and [sees] that kid with the backpack’s fears. I have a feeling if we’re lucky enough to have a season two, a lot your favorites will be making appearances.”

Check out the scene in question here:

“Marvel’s Cloak & Dagger” is a coming-of-age series based on the beloved Marvel characters.  Tandy Bowen and Tyrone Johnson come from starkly different backgrounds, each growing up with a secret they never dared share with another soul.

Once a privileged little girl, Tandy Bowen watched as her family was destroyed by a disastrous storm that uprooted her life. Now in her late teens, an unexpected encounter with a boy named Tyrone sparks a life changing event.

Young Tyrone Johnson wanted nothing more than to prove he was fearless. But when everything he held close was taken away, life taught Tyrone to be afraid. Now older and more sheltered, Tyrone closes himself off. But when he meets a girl named Tandy his life changes forever. 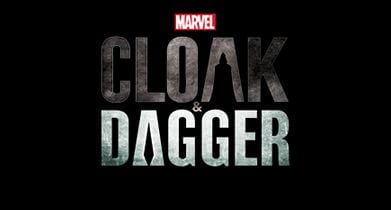