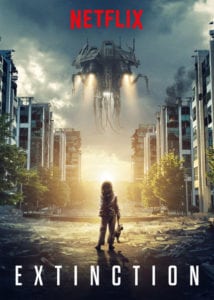 A father has a recurring dream of losing his family. His nightmare turns into reality when the planet is invaded by a force bent on destruction. Fighting for their lives, he comes to realise an unknown strength to keep them safe from harm. 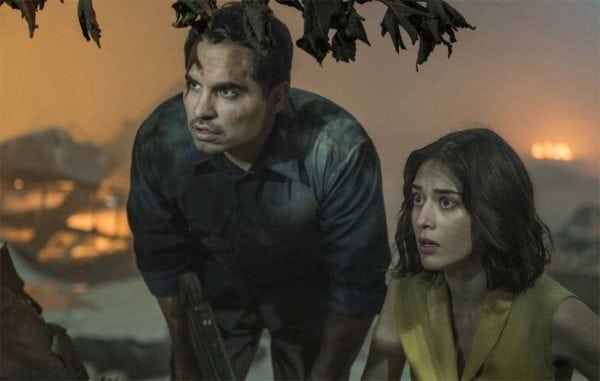 Though it occasionally results in audiences being gifted an Annihilation-calibre product, the majority of studio genre films sold off to Netflix are done so with good reason; the original distributor gets to offload a certifiable box office bomb, while the streaming platform gets another star-filled addition to its platter that can’t be taken away by a rights-holder.

Despite the presence of talented, appealing thesps such as Michael Peña, Lizzy Caplan and Mike Colter, not to mention a script co-written by Arrival scribe Eric Heisserer, Extinction is more-or-less as bad as its cancelled theatrical release implies. A few mildly intriguing moments aside, this is a staggeringly dull, me-too alien invasion movie further plagued by indifferent performances and some highly questionable visual effects.

Spenser Cohen’s original script for this film landed on the 2013 Black List of best unproduced screenplays, and quickly courted the interest of director Joe Johnston (Captain America: The First Avenger) and James McAvoy. They came and went, however, and Ben Young (the terrific Hounds of Love) eventually wound up in the director’s chair, with Heisserer and Fringe writer Brad Kane coming aboard to “tune up” the script.

Whatever shape Cohen’s original work was in, it’s hard to fathom what damage must’ve been done to it before shooting started, because everything in this film, conceptually and thematically, feels miles away from a hot Black List project. The basic set-up follows Peter (Peña), his wife Alice (Caplan) and their two children (Amelia Crouch and Erica Tremblay, sister of Jacob) as they attempt to out-run a deadly alien force seemingly hell-bent on exterminating humanity. 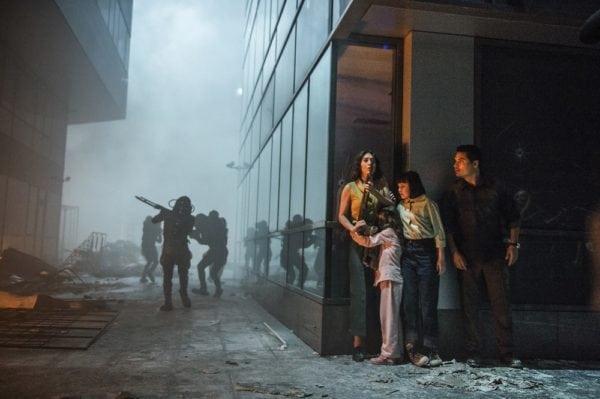 What follows is an ungainly melange of confusing visions flashing before Peter’s eyes, generic set-pieces that feel cribbed from better movies (namely Spielberg’s War of the Worlds remake and Beyond Skyline), and comical alien creatures achieved through a fairly ropey combination of cheap suits and cheaper digital effects.

Extinction’s worst crime, ultimately, is that despite the fast-established mystery of Peter’s visions, this is an intensely boring film for the majority. Crusty family melodrama quickly dominates, with Peter’s bleating daughters either spending their screen time angry at their father’s unreliable nature or screeching about how scared they are.

Nobody could possibly blame kids for being afraid in a scenario such as this, but would it have killed the producers to cast actors not quite so squeaky-voiced and offensive to the ears? The film would be instantly improved without their presence, and while neither Peña nor Caplan is doing work here they should be proud of, at least their fairly non-fussed performances don’t grate and irritate.

Production-wise the thing is meanwhile all over the place; there are some agreeably symmetrical, almost Kubrick-lite visuals every so often, and some effective use of CGI built up on top of real-world locations. However, the budget could clearly only stretch so far, and much of the green-screen is flat-out wonky, while a not-terribly-ambitious visual effect in the final minute of the movie is so piss-poor it’s sure to inspire plenty of shocked laughter. 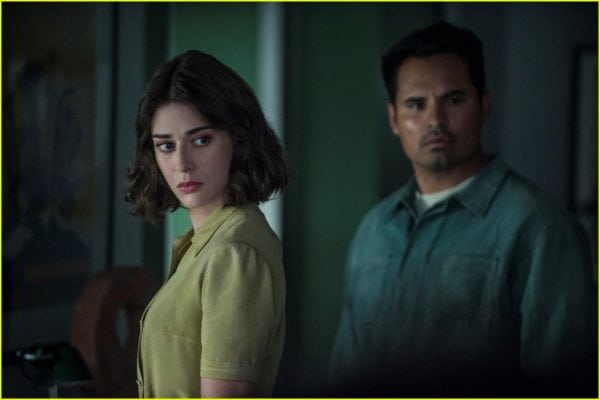 What just scarcely keeps things interesting, then, is the bevy of reveals and rug-pulls that basically comprise the second half of the movie. While a couple of them are mildly interesting, most of the twists bring at least some measure of contrivance with them, requiring the viewer to take some immodest logical leaps.

Though the knowledge that there are twists-a-plenty might convince you to see the film all the way to the end, is it really worth slogging through 95 minutes of overwrought, mediocre sci-fi bunkum for a few scattered morsels of kinda-intrigue?

Not entirely worthless but also living down to almost every expectation you probably have, Extinction strands a capable director and skilled cast in no man’s land with a wildly uneven script and a VFX budget clearly in need of a boost.