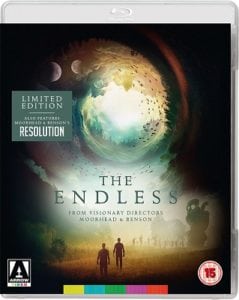 Two brothers return to the cult they fled a decade ago, only to discover that perhaps there was something in what they believed.

Movies about cults – and suicide cults in particular – always make for a riveting ride but The Endless is a slightly different beast to what you may expect going in. This is because the movie isn’t filled with Charles Manson-esque hippie types looking to instigate a societal upheaval or go out on a killing spree based on a misguided philosophy. Instead, The Endless is a slow-burning sci-fi piece, bereft of psychopath hillbillies but exuding a strangely enticing view of humanity, brotherhood and friendship, which is what a cult would probably do if they wanted to draw you in.

And draw you in it does, as brothers Justin (Justin Benson) and Aaron (Aaron Moorhead) receive a video tape in the post from a member of the cult they ran away from years before, prompting the younger Aaron to want to return to visit, as he was only a youngster when Justin ‘rescued’ him and doesn’t remember anything bad about them. Justin, however, is a little more skeptical but agrees to go back only to visit for a day and then return to their unfulfilling and unsuccessful life as cleaners while they go through deprogramming.

It is on the way to the compound out in the desert where things start to get weird, as if going to visit a UFO suicide cult in the desert wasn’t weird enough. Justin notices things like flocks of birds flying in circles – loops, if you will – and clouds forming circular patterns, a motif that is going to appear again and again as the brothers reconnect with a past they thought they had gotten away from. Once they reach the compound they discover everybody on friendly terms and being very pleased to see them, but something is still off as odd little things keep happening, such as members of the group pulling on a rope that disappears into the night sky as a test of strength, photographs falling out of the sky that show images of people being viewed from above and people reaching certain points on the grounds and disappearing, only to reappear and do the same motions over and over again.

So is there an explanation to all of this? Are the cult members all sharing a group psychosis or are there strange goings on out in the Californian desert? Perhaps a bit of both? Well, The Endless doesn’t provide you with all the answers but it doesn’t leave you hanging in an unsatisfactory way either, giving you just enough eerie madness to keep you on your toes but not enough that it overwhelms you. Filmmakers Justin Benson and Aaron Moorhead had very limited means to make this movie so everything really hangs in the script and performances, and, as with their previous movie Spring, they want the audience to play their part in interpreting the material, looking beneath the surface and taking away different things from the various subtexts at play.

And with that in mind there is very little else you can say about The Endless without spoiling it, although such is the vague nature of the admittedly thin plot that it is quite difficult to spoil something so cerebral without the proper context. It is a sci-fi film with a heart and a social conscience, a horror movie where the horror is never seen but is felt throughout and a character piece on the nature of belonging, regardless of where and with whom. The Endless won’t be for everyone – it is very deliberately paced, the acting varying from ‘not great’ to ‘slightly better’ and is possibly a bit too ambitious for its obvious limitations – but there is a lot to be gleaned from it if you allow your imagination to go where the filmmakers want to take you, and that is how successful sci-fi is made.