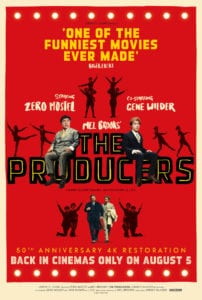 A down on his luck Broadway producer and a permanently nervous accountant join forces to pull a desperate money-making scam that involves putting on the worst play ever written – ‘Springtime For Hitler’. 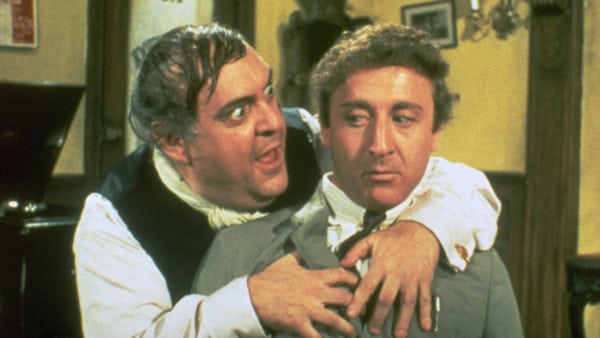 There are fans of Blazing Saddles, there are devotees of Young Frankenstein and there are those who crack up at Spaceballs every time. I, however, didn’t really have a favourite Mel Brooks film until this week, when I saw The Producers ahead of its return to UK cinemas for one night only on 5th August in a new 4K restoration. It’s a madcap comedy, with a rapid-fire rate of gags, all centered around a story that is very familiar in 2018 – a work of art that many believe to be so bad that it’s good.

That piece of work is the disastrous musical ‘Springtime For Hitler’, penned by the unhinged, pigeon-fancying Nazi Franz Liebkind (Kenneth Mars). It has been brought to the stage by washed-up, broke Broadway producer Max Bialystock (Zero Mostel), but actually it’s all part of a scam. The film begins with Max meeting jittery accountant Leo Bloom (Gene Wilder), who realises that it’s actually possible to make more money from a Broadway flop than a success, as the IRS is less likely to investigate the funding behind a play that closed on its first night. This sparks a brainwave for Bialystock and Bloom, leading the duo to Liebkind and his Hitler-worshipping production.

The Producers is Brooks on his smartest and wittiest form. The script is packed with immediately quotable one-liners and the central conceit hums with relevance. ‘Springtime For Hitler’ is exactly the sort of incompetent disaster that, were it released as a movie today, would absolutely find itself playing to sold-out audiences in ironic fashion at venues like the Prince Charles Cinema. Mostel’s character’s exasperated cry of “where did I go right?” in the third act could equally be asked of someone like Tommy Wiseau, creator of The Room. 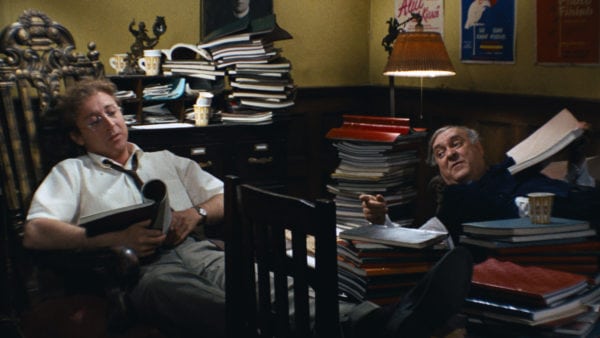 Brooks is assisted by his dynamite central twosome. Stage legend Mostel is terrifically slimy, from the opening in which he seduces a series of wealthy elderly women to the broken man he becomes by the end. Wilder is even better, in a role that could easily have just been a series of howling clichés, but is instead a carefully modulated series of freakouts. An early anxiety attack is an exercise in hysterical physicality, while his near-tearful request for Mostel to “go away, you frighten me” reins everything in to equally delightful effect.

Away from the machine gun of comedy moments, Brooks does a solid job at allowing the bond of toxic friendship to build between the two men, adding the combustible element of Mars as the unhinged Nazi determined to show his Führer in a more positive light. The performance of his musical’s title song is a masterclass in excruciating awkwardness, from near-the-knuckle lyrics (“look out, here comes the master race”) to the dancers arranging themselves into a swastika formation on stage. It still has edge and bite today, so it must have packed a serious punch just 20 years after the Second World War.

And that is what marks The Producers out as the pinnacle of the Brooks canon. It’s a movie that simply has to be seen to be believed and a film that, like its fellow late 60s classic Bonnie and Clyde, still feels boundary-pushing and bold five decades after it was made.