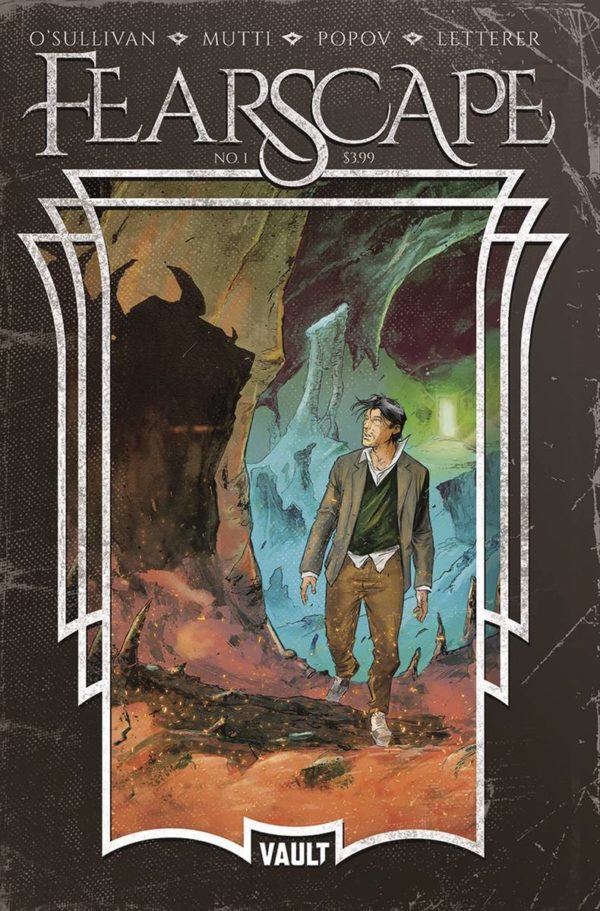 There are unreliable narrators and there’s Henry Henry. The name of Fearscape’s self-professed tragic hero isn’t a typo but it could be a lie, and that’s what makes writer, Ryan O’Sullivan, and illustrator, Andrea Mutti’s, new series so beguiling. Form matters. In fact, the opening page is all about how comics have ruined the 9-panel grid through overuse.

Henry Henry is a writer but one who’s managed to delude himself to such a degree that he’s both a marvel and completely believable. When the issue begins he’s being told off for a translation job he was hired to do. Henry claims he’s improved the work. That, of course, misses the point of what a translator’s job is, but twisting words around is sort of what Henry does best. It’s how, when he learns his benefactor, Arthur Procter, has written a new book, he proposes a plan where he will “translate” it and claim it as his own, and how when the Muse comes looking for Arthur, Henry doesn’t correct her when she takes him instead. Their destination, the Fearscape, contains all the world’s greatest fears come to life. Arthur’s job (or Henry’s, since he’s pretending to be him) is to follow in the footsteps of storytellers before him and destroy the greatest one.

As narrator, Henry should have control of his story and if Fearscape settled for being a character study, Henry’s penchant for being unbearable could become a sticking point, but instead he is betrayed by O’Sullivan and letterer, Andworld Design, who lay his lies bare for all to see. Narration boxes are shown covering speech bubbles, but never enough that you can’t see what’s written underneath, and Henry’s attempts to talk over the truth fail miserably under their watch.

Going by the rules of narration, these checks against Henry’s control shouldn’t be possible. Anything he doesn’t want to get out should be in his power to suppress and it’s his prerogative whether he wants to be unreliable, but that’s when you run into questions about whether his narration’s taking place in real time or in hindsight. Henry repeatedly breaks the fourth wall to insist that we, the reader, and he are a team. He wants to make us complicit in his lies, but if these events are from the past, nothing we say will make a difference. Then again, how do you explain Henry letting his lies be exposed, ignoring some and trying to explain others, unless we’re dealing with a real time situation?

Henry could be sympathetic. A silent version of the scene where he talks to his agent, or rather Arthur’s agent, would be much more critical of the agent being dismissive of him, but you end up siding with the agent because you know how manipulative Henry can be.

Henry’s manipulations have their own draw, especially since there’s usually a nugget of truth to them. Writers have always taken inspiration from other writers. The trouble with Henry is he takes things to the extreme, testing how far the truth can stretch and still remain true.

Befitting Henry’s mutating story, there’s a muted-ness to Mutti’s art that leaves nothing feeling set in stone, the way the fog makes everything dreamlike when you’re walking down the street at night. Vladimir Popov’s colors brush across the page, as if carried by the wind, soft until you get to the statuesque Muse and her ethereal head tilt. Next to the scruffy Henry, she is much more defined but then, if Henry’s face is sometimes obscured that’s because he has to stay low in the Fearscape. He’s pretending to be somebody else.

While Fearscape is accessible to all readers, English majors (guilty) might feel slightly bigheaded, recognizing all the references, and the prospect of more historical storylines, opened by meeting one of the storytellers who came before Henry, threatens to steal the issue away from him. A comic that’s worth a read to see how it’s constructed, as much as to see what it’s about, Fearscape #1 goes on sale September 26th from Vault Comics.