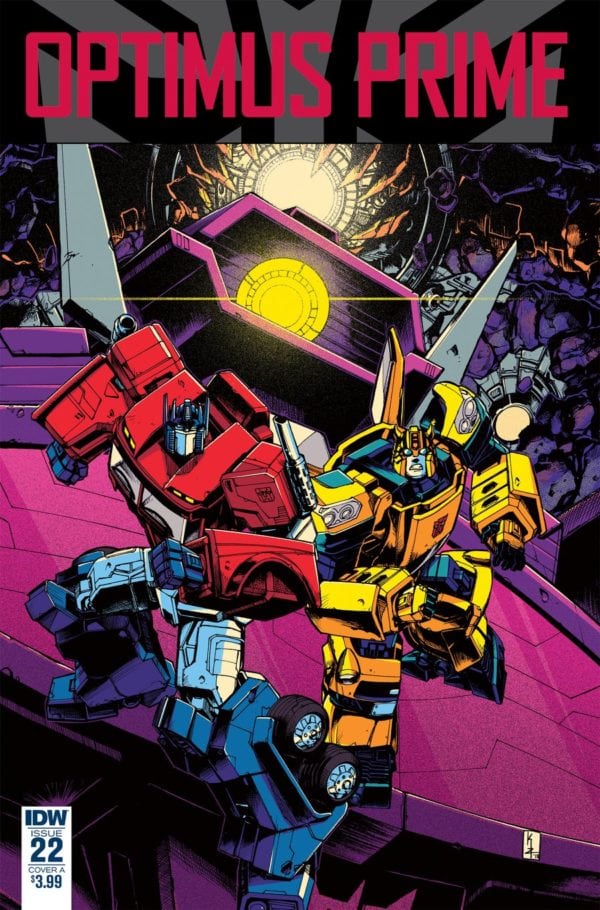 With Unicron’s arrival in the IDW universe, Optimus Prime #22 takes an unusual step in showing more of the lead-up to Unicron, an event that is already halfway through its series. This is in part because of the delays IDW has put its Transformers titles through over the past few months, but it negatively affects this issue since there’s no tension as well as missing out on some character interactions that had potential. It’s still a good issue that connects the dots between the title and Unicron, but it just doesn’t come up to par with the recent issues of Optimus.

There’s actually a lot of moving pieces in Optimus Prime #22 as John Barber bounces back and forth between various situations and groups of characters. Unicron’s movements throughout the galaxy to the Cybertronian colonies happens very quickly, jumping from one point to the next as we discover some more Autobots and other side characters who were killed in Unicron’s early attacks. The story flows fairly quickly because of this as Barber goes from point A to B, but it still lacks drama because, again, we mostly know the aftermath of a lot of these events. What takes away from the drama is that longstanding characters die at the ands of Unicron, yet there’s no time for the issue to really dwell on their passing, especially in the case of Wheeljack where it is only referred to in an editor’s note for readers to find Unicron #0 for Wheeljack’s death. Even with that, though, none of the characters mourn those who were lost.

That feeds into the lost potential of the issue’s character interactions. Not only is Optimus returned back to his body, but this issue marks the official return of Bumblebee to the land of the living after being in a state of limbo, only being able to converse with Starscream for the past few years. However, there is not even a single panel with Bee and Starscream together as they acknowledge how close they’ve become, Starscream’s guilt and Bee’s work in trying to guide Starscream to becoming a better bot throughout Transformers: Till All Are One. Likewise, there isn’t a reunion featured between Bee and Wheeljack, something that seemed really omitted considering their close friendship in IDW’s continuity. Character moments like these, which Barber almost always excels at, seem sacrificed just to fill in some holes between Optimus Prime and Unicron.

The few character moments that are in the story Barber utilizes well. Optimus and Pyra Magna get a couple good moments as they debate what their plan against Unicron and the Maximal army will be, which has a bit of a moral debate of the events leading into Unicron #1 as Optimus decides it might be best to use Caminus as a sacrifice in a bid to stop Unicron. Barber writes the debate well, with Prowl calling it the most logical thing to do, but again doesn’t explore the moral implications more fully. We don’t even get a full scene where the characters weigh the pros and cons of Optimus’ plan as the scene just cuts to the decision having been made. The only thing this issue does add is how some of Caminus’ inhabitants have decided to make a move against Optimus due to his poor leadership, specifically Slide whose hatred of Optimus has been steadily growing since the very beginning of the series.

Sara Pitre-Durochere’s art is again well done. There’s a fair bit of detail on each of the transformers, though her facial work on the bots isn’t quite as expressive as most of her previous work. She still does a good job, particularly in making Unicron feel like a very imposing force. Josh Burchman’s colours compliment her work well and has some vibrant images as the character witness the destruction of several planets.

Overall, Optimus Prime #22 is a bit of a step down as Barber uses the story to connect the dots to IDW’s main event rather than focusing on the character moments or moral dilemmas they face. It would have been stronger if Barber focused more on those character interactions, but he still wrote each character consistently. With IDW ending their universe in just a short couple of months, hopefully the quality of Optimus Prime‘s final issues will deliver more satisfying stories.