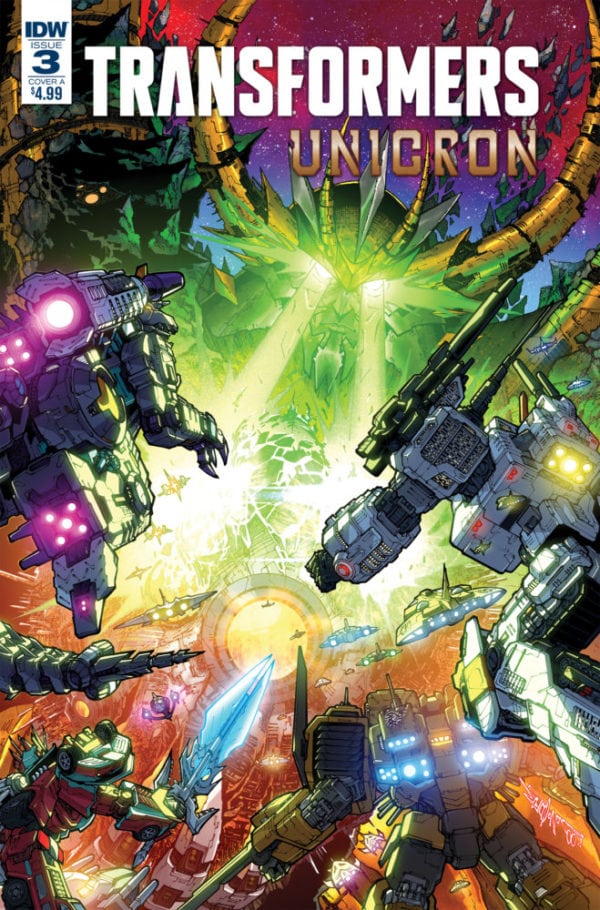 Answers are revealed and stakes are raised in Transformers: Unicron #3 as the sins of Cybertron’s past literally comes back to destroy it. John Barber writes an engrossing issue with several great character moments and new moral dilemmas they must face in order to survive Unicron’s onslaught. As the halfway marker for IDW’s big and final event series in the Transformers continuity, it is definitely a good middle chapter as all hope seems lost.

As Unicron hovers over Cybertron and reveals he, too, is a transformer, the big question on many of the character’s minds is what to do next. The moral dilemma they face is whether or not they fight what appears to be a fruitless battle against such a massive bot and his fleet of minions or simply abandon Cybertron and much of its populace. Its a problem that doesn’t seem to have a simple solution and places Optimus Prime in a particularly hard spot as most of the bots look to him for what their next move is. The debate that rages between Cybertron’s leadership is well-written and compelling. Barber is able to capture each individual voice and gives solid reasons for each one’s rationale with their decisions.

The full origin of Unicron is also seemingly revealed as something Shockwave is inadvertently responsible for. In his persona as Onyx Prime in ancient Cybertron, he and other early Cybertronians wiped out a whole planet and its race in their quest of expansion across the galaxy. The dying race, however, created a device that would turn their planet into Unicron as an act of retribution for Cybertron’s invasion. The origin Barber creates is an intriguing one that ties together some of the loose ends from his Transformers and Optimus Prime series with the planet Antilla and its mysterious connection to Cybertron that have often come up. It is interesting, though, that Windblade brings up how Cybertron’s lust for power is what led to their current problem, reinforcing the seemingly never-ending cycle of war, genocide and injustice in Cybertron’s history. It’s a theme that has often sprung up in Barber’s stories, especially the past few years as Optimus has taken on a much more significant role in galactic politics by annexing Earth and using some people’s belief in the Primes to further his goals.

Elsewhere, there is a fair bit of action as some Cybertronians launch their own assault against Unicron. Alex Milne depicts some nice action as Victarion takes on several Maximals and Elita One engages their ships. It’s all for naught, though, as their hubris and lack of cooperation lets the dire situation become even worse. There’s even the return of a certain combiner who played a big role in the beginning of IDW’s continuity and has popped up every now and then and serves as a reminder of just how powerful he is.

On Milne’s art, he again illustrates some outstanding images throughout the book whether its just Optimus and the others debating what to do, the space battle or the quick flashbacks to Antilla. He has a good sense of choreography in the fight scenes and his body language for the characters during their debate is good too as he’s able to show their discomfort and uncertainty very well. The only thing off about Milne’s art, and its not necessarily noticeable right away, is his depiction of Cybertron. Milne draws a very classic looking Cybertron, one with tall towers, roads and glittering lights all across the planet when its still supposed to be a primordial wasteland save for a few small spots. It’s a small continuity error that doesn’t really affect the story, but should have had a bit more attention to detail. Despite that instance, Milne still delivers a great looking issue and Sebastian Chang and David Garcia Cruz compliment his work with their vibrant colours.

Transformers: Unicron #3 marks a good halfway point in IDW’s final event series. Barber’s examination of Cybertron’s dark past and the moral dilemma the characters face is nicely displayed as they struggle with their next move. Milne’s art is well done throughout the book and his version of Unicron certainly is intimidating, as is the fierce battle raging across Cybertron’s sky. With things looking dire, but Windblade having a plan – and Starscream of all people saying they should trust whatever Windblade has up her sleeve – it looks like the endgame is only just getting started.